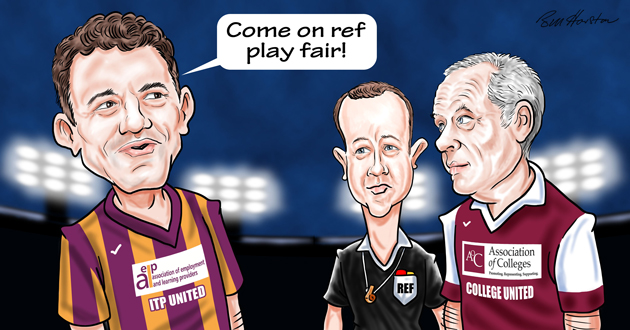 The government has been accused of “distorting the market” against independent training providers with its post-area review support package for colleges by a sector leader.

Mark Dawe, the new boss of the Association of Employment and Learning Providers, has now demanded a “level playing field” for public and private providers alike, on the eve of his first conference.

He told FE Week: “All we are looking for in AELP is a level playing field and all providers having the same opportunities, whether college or independent training provider, private or charitable.

“We are concerned that the government is providing financial assistance to colleges to help set up apprenticeship organisations in direct competition with independent training providers.

“In some cases this feels like it is the government distorting the market and potentially providing state aid in an inappropriate manner.”

He pointed out that providers of all stripes were facing unprecedented change, and that it would be “appropriate” to support everyone involved — particularly over apprenticeships.

“With 76 per cent of the [apprenticeships] delivery, you would have thought the government would be keen to support ITPs as much as colleges through this transformation.”

The government’s post-area review support package includes transition – or consultancy – grants of up to £100k to help colleges “access the best change management skills”, according to guidance published by the Department for Business, Innovation and Skills in April.

Two of the three area reviews to have completed so far – Sheffield City, and Birmingham and Solihull – have included proposals for the colleges involved to develop a joint apprenticeship company.

Loan funding from the government’s restructuring facility is also on offer for colleges to help them implement recommendations from the area reviews.

The fund is for general FE colleges and sixth form colleges “impacted by a substantive area review recommendation” and “unable to fund the change themselves”, according to guidance published last month.

Commenting on this restructuring facility, Mr Dawe said: “If colleges are considered unsustainable in their current form, they should be offered not just to other colleges but to ITPs and others with the same financial incentives that are being offered through this fund – for example, loan support and loan write offs.”

He added: “There should be a prospectus for sale for every college in this situation.”

A BIS spokesperson said: “The restructuring facility is there to support the implementation of recommendations from the area reviews.

“It’s focused on FE and sixth form colleges because this reflects the focus of the area reviews themselves.”

Details of the restructuring facility, which is being held by the Treasury, were exclusively revealed by FE Week in February, two weeks before they were confirmed by BIS.

FE Week understands the size of the pot to be £560m, although this has never been confirmed despite repeated enquiries to the Treasury.