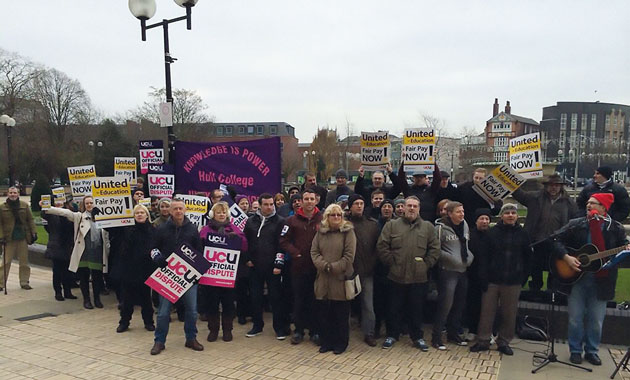 “Angry and demoralised” staff at Hull College have voted to go on strike in a row over pay, and a controversial new lesson observation system.

The University and College Union (UCU) said the college had offered staff a 0.7 per cent pay rise last September, and had also promised to make changes to unannounced lesson observations, which have been heavily criticised by teachers.

But the college went back on its promise to increase pay, while staff have complained that changes to the lesson observation system are leaving them more stressed and anxious than ever, the union has claimed.

He told FE Week: “The staff have had no pay rise for the past couple of years while other colleges in the region have implemented pay deals to reward their staff. Hull College is unwilling to do that even though they were forecast to make £103,000 surplus.”

Mr Giddins said staff were “rightly anxious” that a “judgement based upon a snapshot”, such as the college’s observations process, could affect their career, type of pay, or even leave a “massive slur on people’s professionalism, which demonstrates a lack of trust in their staff”.

He added: “Part of the issue is that observations are flawed in essence. A whole raft of academic evidence shows that big decisions should not be predicated on the results of classroom observations because of the lack of reliability and validity.”

Hull College currently uses lesson observations to make a variety of decisions on staff, including peer progression, selection for redundancy criteria, and capabilities.

Mr Giddins said: “The consequences of these unannounced observations is that people could be waiting all year for them, and instead of focusing on teaching and learning, they are actually wondering when someone is going to walk in with a clipboard and use quite a restrictive notion of what is good teaching practice to measure them by.

“Staff really want to play a part in owning an observation teaching and learning policy rather than having it done to them.”

Julie Kelley, one of UCU’s regional officials, said strike action was always a “last resort” but staff at Hull College felt they had no choice.

Mr Giddins added that the way Hull College had conducted its industrial relations was “appalling and threatening”.

He said: “They have issued a statement on their staff portal that is unequivocal in that any action short of a strike would be deducted at full pay, and the language that they use is appalling.”

A spokesperson for Hull College said that less than 12 per cent of the college’s overall workforce voted for the strikes.

The spokesperson said: “The management team and UCU are continuing to meet to resolve the issues which ensure the group’s overall financial position is protected in a challenging funding climate for the FE sector, as well as ensuring the high quality of our teaching and learning is maintained, as highlighted by Ofsted in our most recent inspection.”

The college was rated as good by Ofsted in its latest inspection which took place in November 2015.

Picture caption:
Hull College staff during strike action, in February, over the Association of Colleges’ recommendation for a zero per cent pay rise in 2015/16