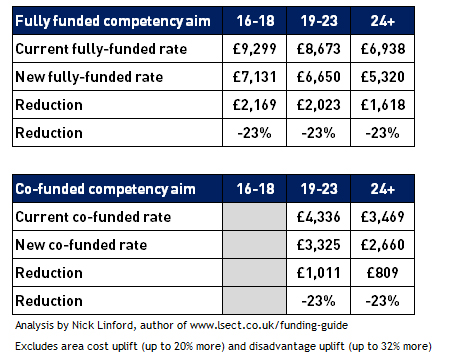 The Skills Funding Agency (SFA) will reduce funding rates for the level three ‘IT, Software Web and Telecom Professionals’ apprenticeship framework by around £2,000 from April 1.

The agency warned in it’s Update bulletin this afternoon that it would be reducing the funding values for the Level 3 competence qualification.

The Update bulletin said that “this is part of our regular review of apprenticeship framework costs to ensure value for public funds.

“From 1 April 2016, we will reduce the funding values for new apprenticeship starts only; those already on programme will remain on their existing rates. We will change the competency aims (not knowledge, English or maths aims) for the published rate from £8,673 to £6,650, a 23 per cent reduction.”

The SFA has not reduced apprenticeship framework rates since 2012/13, after a freeze was imposed during plans for switching to the new standards funding system.

But FE Week understands the rate for ‘IT, Software Web and Telecom Professionals’, which is one of the highest for all frameworks and includes a competency, knowledge and up to three functional skills qualifications, is now considered far too high by the SFA — particularly at level three.

“Based upon the most up to date information, the new rate is more reflective of the cost for delivering the framework, an SFA spokesperson told FE Week this morning: “We are making the change following a review, which we do periodically and when new information is available, as part of a routine review of apprenticeship framework costs.

But Stewart Segal, chief executive of the Association of Employment and Learning Providers, told FE Week he would be calling on the SFA to review the timing of its decision.

He added the decision was “based purely on the measurement of duration… just one aspect of the cost and quality of the framework and it should not drive the funding which is based on a complex mix of delivery factors.”

Despite the relatively high level of per apprentice funding, the level three course is, for example, not a relatively long framework.

The Tech Partnership, a network of mainly large technology firms, is the government’s Issuing Authority for the apprenticeship framework and they expect a minimum of 18 months with just a minimum of 674 guided learning hours with Functional Skills or 539 without — or, they say, as little as six months for an adult with prior attainment.

The framework is becoming increasingly popular with colleges and training providers, especially those recruiting fully funded 16 to 18-year-old learners. It had the second most starts at level three for 16 to 18-year-olds by framework last year and the number of starts have been rising rapidly since 2012/13.

The most recent published success rates are for 2013/14. They show which providers had the most leavers for this framework at level three (August 2013 to July 2014):

There were 38 providers delivering this framework, also based the latest success rate data — with the most in total being the British Army (870 leavers) and QA Limited (450 leavers).

The Tech Partnership was unable to comment ahead of publication.