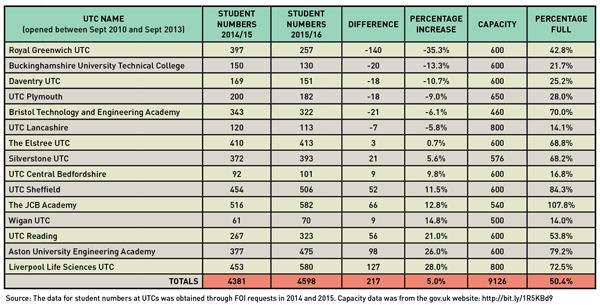 When the Tories launched their manifesto in April last year at a University Technical College, they promised to create one of them ‘within reach of every city’. Nicky Morgan said: ‘I think we will see an improvement in recruitment. UTCs are a very important part of our overall education offer.’ So what do the September recruitment figures tell us?

Bristol Technology and Engineering Academy, Buckinghamshire UTC, UTC Plymouth, Daventry UTC and UTC Lancashire also saw their numbers fall by between seven and 21 students, according to data obtained by FE Week through Freedom of Information requests.

The remaining nine UTCs increased their number of students from 2014/15 to 2015/16, though figures varied considerably. The smallest increase was at The Elstree UTC, which took three more students this year compared to numbers from last year.

In contrast, Liverpool Life Sciences UTC had the greatest increase with 127 more leaners, a 28 per cent increase that brings its total to 580 students for 2015/16.

Overall, the data for this academic year showed that recruitment remains a problem for UTCs, echoing FE Week’s research from April 2015.

This found that of the 16 UTCs set up between September 2010 and September 2013, six were operating at up to just a third full at the time – with two running at no more than 14 per cent capacity.

In terms of reaching capacity this year, Wigan UTC has the furthest to go at only 14 per cent full. The UTC had just nine more students in 2015/16, bringing it to 70 in total.

UTC Sheffield had strong figures in terms of capacity at 84.3 per cent full this year, while the JCB Academy – the first UTC to open in 2010 – was strongest overall, exceeding its capacity of 540 with 582 learners for this academic year.

Since 2010, two UTCs have also been forced to close. Hackney UTC closed in July 2014, after problems attracting learners, and the Black Country UTC closed its doors in August 2015, after a “disappointing” Ofsted inspection and low student numbers.

Commenting on this research, Charles Parker, chief executive officer of the Baker Dearing Educational Trust, said: “The Education Secretary has acknowledged that it is hard for UTCs and colleges to get access to students in other schools. This makes it a challenge to raise awareness with young people that UTCs are an option to consider at 14.

“Despite the challenges more than half of the UTCs listed are seeing improvements in recruitment.

“However, it’s important that we find ways to ensure every child who can thrive at a UTC has the opportunity to do so.”

The principals of Greenwich UTC, UTC Plymouth and Daventry UTC had not commented on the research at the time of going to press. The principals of Buckinghamshire UTC and Bristol Technology and Engineering Academy declined to comment.

The story behind the numbers – UTC Lancs At UTC Lancashire, student numbers fell by seven between 2014/15 and 2015/16 ¬– and they remain almost 500 learners away from reaching capacity.

Speaking to FE Week, acting principal Jacquie Petriaho (pictured) admitted that UTC Lancashire’s learner numbers for year 10 had fallen, saying that the senior leadership team (SLT) was disappointed with the final figures for this year group in 2015/16.

“The governors and leadership team interviewed every young person who applied to the UTC for a September 2015 start, and only offered places to the students who genuinely were interested in studying the specialisms on offer; design, construction and engineering,” Ms Petriaho said.

“Many students, and parents of students who applied, realised during the interview process that the UTC was not an appropriate place for them to study at the age of 14.

“Even though governors and the SLT were disappointed with our final numbers for year 10, it did mean we were certain the students we recruited had applied and would come for all the right reasons,” she added.

Ms Petriaho added that numbers in years 11, 12 and 13 have increased slightly compared to previous years and she is optimistic that the UTC will boost recruitment moving forward.

“The UTC governors and SLT are working extremely hard to ensure numbers increase in all years next academic year, 2016/17, and over the next few years,” she said.

Ms Petriaho has recently taken over the leadership of UTC Lancashire, after the original principal, Martin Callagher, left in late 2015. Mr Callagher had been with the UTC since its inception in 2013.

Ms Petriaho confirmed to FE Week that Mr Callagher has now taken a role at Training 2000, the group training association that was previously the main sponsor of UTC Lancashire.

She added that UTC Lancashire is no longer working in partnership with Training 2000.