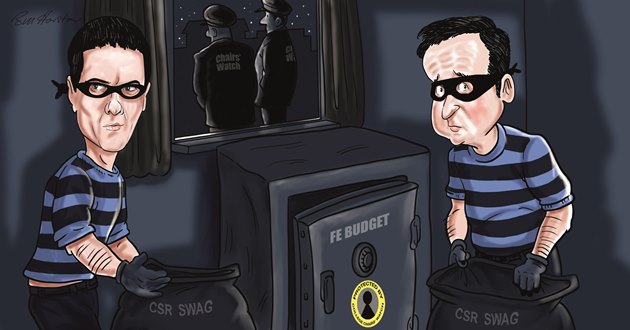 More than 100 college governors’ board chairs put on a united front to Prime Minister David Cameron in a desperate bid to defend FE funding from Chancellor George Osborne and the impending Comprehensive Spending Review (CSR).

They wrote to Mr Cameron outlining the sector’s “parlous financial state that has been caused by the impact of an accumulation of funding changes that have uniquely hit colleges”.

The letter outlined the effect of cuts this year of 24 per cent and then a further 3.9 per cent, along with the 17.5 per cent reduction in funding for full-time 18-year-olds, among other issues affecting colleges.

It was signed by 127 chairs of colleges across the country and comes ahead of the CSR, which is expected on November 25.

It said in the letter: “The National Audit Office study into the sector expressed concern about its financial health, and the Education Secretary has also said the sector is financially “fragile”. Professor Alison Wolf, in her most recent research paper, commented that the sector was heading for the precipice in financial terms.”

It added: “There is a real fear that further funding cuts in the next CSR round will indeed tip us “over the precipice”. Moreover, there is an even greater fear that this could happen by accident or a lack of detailed understanding of the impact of recent decisions.

“The CSR offers an opportunity to ensure colleges can help government deliver what it aims to achieve.”

The chairs went on to issue five requests of Mr Cameron. They said they wanted “no further reduction in the quantum of adult funding” and “consistent and equitable funding for all 16 to 18-year-olds at college”.

They also said they wanted “more certainty and predictability of funding over a reasonable period of time, ideally three years” and a “re-examination of the current thinking relating to post 16 provision” along with all current and proposed post 16 providers to be included in post-16 education area reviews.

The final request was for “recognition that effective delivery of the maths and English agenda requires new and adequate resources, sufficient funding and long-term support to help recruit qualified specialist staff”.

The letter, dated October 31, concluded: “Colleges have a vital role in helping your government achieve its ambitions with regard to social cohesion, social mobility and economic success.

We are unique and responsive institutions that share these same ambitions and care deeply about our communities.

“We hope this letter clearly explains our fears and frustrations that we cannot do this as effectively as we would like and hope you will consider our concerns and our proposals which we believe will better deliver your government’s agenda.”

The Association of Colleges said it supported the letter.

Number 10 declined to comment, but confirmed the letter had been received and said that a response would be given in due course.