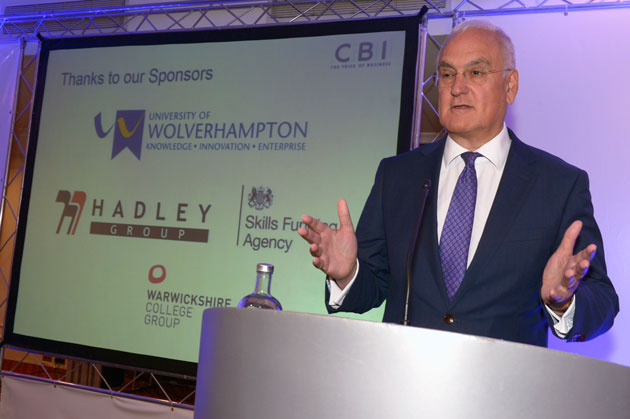 The chief inspector was in an uncompromising mood today as he addressed the Confederation of British Industry (CBI) West Midlands education and skills conference, with a speech that officially launched the publication of Ofsted’s long-awaited apprenticeships report.

“Why is it that so many local firms are forced to rely on imported skilled labour because they find it impossible to find the right capabilities locally, and who is to blame for this?” Sir Michael asked delegates at the St John’s Hotel, in Solihull.

“In my opinion there are three guilty parties: schools, FE providers and… employers.”

Sire Michael called for an overhaul of the system for delivering apprenticeships, with a focus on Germany and Switzerland as examples of good practice.

He added the “snobbery” that has seen apprenticeships packaged as “the last chance for the academically challenged” has to end.

“The fact that only five per cent of our youngsters go into an apprenticeship at 16 is little short of a national disaster and a national tragedy,” he said.

His pulled no punches when offering guidance to both educators and employers.

He advised FE providers to specialise, rather than attempt “to be all things to all men and women”.

“Our inspection evidence shows that when they focus on the curriculum, when they concentrate on specialisms that meet local employment needs — standards invariably rise,” Sir Michael added.

“We are increasingly seeing providers, especially general FE colleges, failing because they’re not engaging with local businesses and not updating their courses to match local needs.”

Sir Michael was equally unforgiving, when addressing the many employers in the audience.

He said: “It’s no good carping from the sidelines about standards, if you don’t get involved yourselves.”

He recommended that businesses should lead by example — through sponsoring academies, engaging with curriculum design, and supporting employees who act as school governors.

Addressed business leaders directly, he added: “This is my challenge to you, organise yourselves, it’s no use waiting for others to put structures in pace and then bemoaning the progress made. Use your networks and knowledge to find solutions.”

“They’re abusing the trust placed in them by government and apprentices to deliver meaningful, high quality training,” he said.

Sir Michael added that Ofsted would not “shy away” from reporting failures, and called on funding agencies and the government to “continue to be prepared to withdraw finance from those employers and providers who abuse the system”.

“I urge government to be radical in its reform of this sector. We’ve indulged in mediocrity for far too long and we should no longer accept it,” he said.

Sir Michael added: “An apprenticeship isn’t endless tea making, shelf stacking or envelope stuffing. It is not an induction course, or a six week in house training scheme. It is not a badge for doing what is already being done.

“An apprenticeship is quality training, delivered over a long period, which meets real business needs and is regularly assessed by experts.”