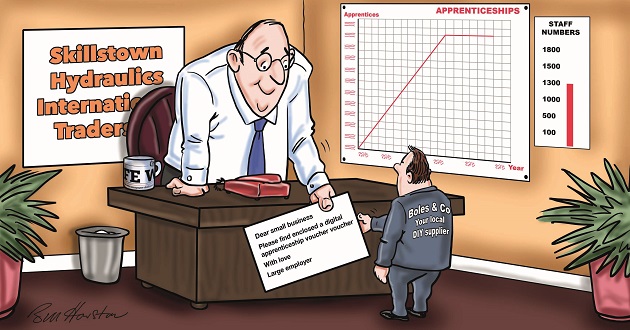 Large employers should be able to hand out apprenticeship funding earned under the government’s proposed new levy system to smaller firms, ministers have been told.

The call was made by the Federation of Small Businesses (FSB) in its response to the government’s consultation on the plans, which closed on October 2.

It said large employers set to be made to pay the levy “may not have capacity to take on additional apprenticeships ‘inhouse’, while others may already have a fully qualifi ed workforce that fulfi l their immediate needs”.

“We believe these employers should have some control over where their levy money is spent and, in keeping with the ‘use it or lose it’ model, be permitted to select other companies to receive a proportion of their levy contributions,” the response added.

It stated that large employers may want to hand over surplus funding from the levy, set to be introduced in 2017, to smaller employers in their supply chains that would not be required to pay the charge.

“Others may wish to fund the training of apprenticeships, for instance, for corporate social responsibility or community purposes,” it added.

David Pollard, chair of the FSB education and skills committee, also said in a letter accompanying the consultation response that “it is important the levy is designed in a way that meets the requirements of employers over the long-term, and that we avoid constant policy churn”.

The consultation responses of a number of other sector bodies, including the Association of Colleges (AoC) and Confederation of British Industry (CBI) were reported in edition 149 of FE Week.

The CBI stated that “employers should be allowed to spend their levy on training outside the company — for instance in their supply chain if they choose to.

“Many businesses train apprentices for their partners or the wider supply chain. Toyota, for example, operates a ‘cooperative model’ of apprenticeships with its suppliers and local businesses.”

It also called for the levy to be controlled by a new independent board, using the Low Pay Commission as a “blueprint”.

Meanwhile, the AoC warned the “government must not be seen to be using the levy as a reason to reduce its own £1.5bn annual spending on apprenticeships”.

The response from the Association of Employment and Learning Providers, covered on feweek.co.uk, proposed that cash generated by the levy should be combined with government funding in a central pot available to all employers.

A spokesperson for the Department for Business, Innovation and Skills declined to reveal how many consultation responses it had received, but said: “The government response [to all consultation submissions] will be published in due course.”