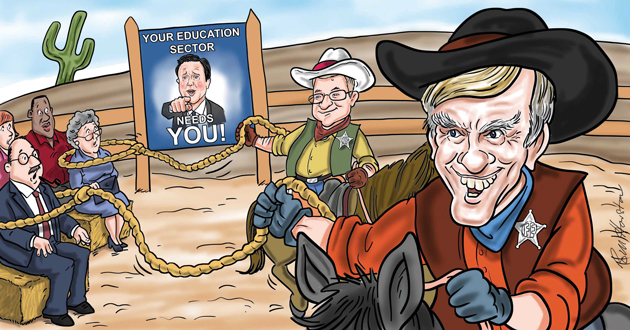 The first of them is chair of governors at Blackpool Sixth Form College (SFC) and national leader of governance advocate at the National College for Teaching and Leadership (NCTL), John Boyle.

The other is Mike Southworth, who retired as principal of Priestly College in December after serving in the post since 2002.

Mr Southworth and Mr Boyle started their new posts on August 11, and the Department for Education (DfE) told FE Week on Tuesday (September 15) that they are the only two SFC advisers that have been appointed.

It comes after FE Week reported online on Monday that FE Commissioner Dr David Collins would be appointing a new intake of FE deputy commissioners (FEDCs) and advisers.

A DfE spokesperson said that the roles of the advisers will, for example, involve “supporting the intervention process [led by Mr Mucklow] to tackle poor performance [in SFCs], either in terms of financial management or quality”.

They will also work alongside Mr Mucklow and FE Commissioner Dr David Collins on upcoming area reviews, covering 16 SFCs and 22 general FE colleges in Birmingham and Solihull, Greater Manchester, and Sheffield city region, which were announced by the government on September 8.

The advisers will carry out “the institutional analysis which underpins the reviews and their recommendations”, the spokesperson added.

Mark Bramwell, associate director of SFCs at the Association of Colleges (AoC), said: “We congratulate John and Mike. We have worked with them both closely for a number of years as active members of AoC’s sixth form college portfolio group.”

James Kewin, deputy chief executive of the Sixth Form Colleges’ Association, said: “Both [Mr Southworth and Mr Boyle] are well known and respected in the sector, and it will be helpful to have advisers with SFC expertise assisting the SFC Commissioner.

“But our view remains that the area review policy and process is deeply flawed — we await the outcome of the Birmingham review with great interest, particularly the extent to which they include school and academy sixth forms.”

The area reviews for Birmingham and Solihull, Greater Manchester, and Sheffield city region will start on September 18, 21 and 28, respectively, but affected principals have told FE Week of concerns that the reviews do not cover school sixth form provision.

Mr Boyle and Mr Southworth are on reactive contracts, meaning that they have no minimum or maximum number of hours to fulfil, so will work when they are called upon at a rate of up to £600 a-day.

A Department for Business, Innovation and Skills (BIS) spokesperson confirmed that it was looking to recruit three FEDCs, who will earn £700 a-day, and an unspecified number of advisers, who will earn £600 a-day.

The application window for the two-year positions closes on September 30.

Interviews are then pencilled in from October 26, with appointments expected from November 1.

The last round of appointments took place in November 2014 — raising the number of Dr Collins’.

FE Week reported in November that five former principals and one ex-vice principal made-up the new intake of advisers for Dr Collins.