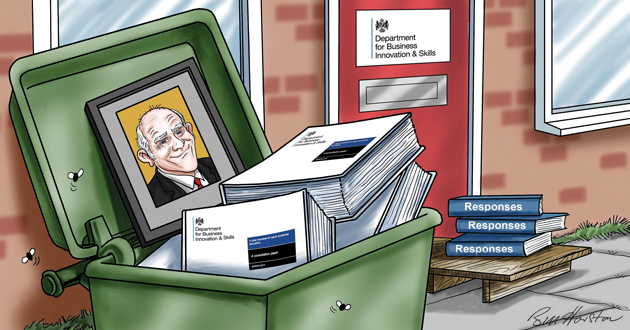 Former Business Secretary Dr Vince Cable’s ‘dual mandate’ consultation looks likely to have been binned by officials after the deadline for a government response passed without note.

The 90-page consultation document put 44 questions to the FE sector on what was described as its ‘dual mandate’ — vocational learning for those who achieved at school and don’t want to go to university, and a ‘second chance sector’ for those who didn’t get their GCSEs at school.

But the consultation closed on June 16, and official rules say the government should have published its response, or a statement explaining why its response was not forthcoming, by Tuesday, September 8.

But nothing had been released by the government by the time FE Week went to press, and the Department for Business, Innovation and Skills did not respond to questions about the consultation’s future.

While some sector leaders have speculated that other policies announced since the general election could be to blame for the delay, the University and College Union (UCU) has nevertheless called for the response to be issued “promptly”.

“We need a prompt response to the dual mandate consultation which sets out a clear vision and proper funding for the future of FE at all levels. This will allow providers to plan ahead and help to inform the area reviews which are now being undertaken.”

Stewart Segal, chief executive of the Association of Employment and Learning Providers, said the delay could be explained by events since the general election, including the apprenticeship levy announcement.

He added: “In any event, we said in our response that the term dual mandate was confusing and that the variety of learners, employers and providers in the FE and skills sector could not be divided into two distinct routes.

“This is not to say that it was an initiative of little value because the consultation offered AELP an opportunity to submit views on a wide range of questions.”

David Corke, director of education skills and policy at the Association of Colleges, said the government’s productivity plan and post-16 area reviews guidance had offered “more detail of its vision for a strong professional and technical education system to help increase productivity”.

He added: “Whatever the outcome of the consultation it is important for the wider UK economy that colleges are supported to be able to continue both technical and professional education as well as education and training for people who didn’t do well at school.

“We are continuing to discuss the government’s ambition with them, prioritising the interests of the students, employers and communities that colleges support.”