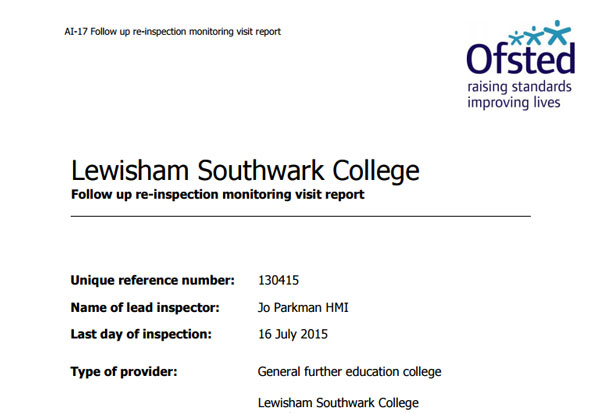 Ofsted has recognised a “reasonable” level of improvement for learners in all areas in its latest monitoring visit report on Lewisham Southwark College.

The college, previously named Lesoco, became the first FE and skills provider to be branded inadequate by Ofsted twice in a row earlier this year.

In a report on an inspection in February, the college was criticised over the pace of improvement and a failure to raise standards after it was first given a grade four rating in January last year following a visit by inspectors in November 2013.

An initial Ofsted monitoring visit report published in May set out priorities for improvement, for example to the college’s curriculum planning, staff management, teaching and finances.

But a second monitoring visit report out today recognised “reasonable improvement for learners” in all areas.

Principal Carole Kitching (pictured right) said: “I am delighted that Ofsted has recognised that the hard work of our staff is resulting in improvements across the board for all our students.

“I am determined that the pace of improvement will accelerate in the weeks to come with our all new permanent senior team now in place from some of the best colleges in the country.”

The same applied, the report said, to the college’s efforts to ensure that “the curriculum offered meets the needs of the college’s target group for recruitment” and identify “the reasons behind the significant drop in learner numbers for 16- to 18-year-olds”.

“Senior leaders and governors have now completed the organisational review and the actions taken have successfully reduced the previously high staffing costs and brought the college in line with similar colleges,” the report said.

It stated that the number of curriculum managers had been reduced from 20 to 11 and “this smaller number of larger curriculum areas has enabled the senior management team to ensure that all curriculum areas now benefit from the skills and experience of the best managers”.

Meanwhile, it said that “the governing body now has the skills and experience it needs to provide a good level of challenge to the senior management team”.

For maths and English provision, it said that “the heads of both subjects are reporting directly to the head of teacher education and development to ensure that the development of these skills is at the heart of all teaching”.

It added that the timetabling of separate English and maths lessons had been centralised and formed “a core around which all other timetables have been built”.

“This will ensure that all learners have timetables which provide sufficient scope for the development of their skills,” the report said.

It praised new punctuality and attendance policies, but warned that “senior managers have not given enough thought about the quality assurance arrangements for registers and how they will evaluate the accuracy of the recording of lateness or absence”.

The inadequate Oftsed report in February for the general FE college, which had around 18,000 learners and Skills Funding Agency (SFA) allocation of almost £24m at the time, came after four Ofsted monitoring inspections since the initial inadequate rating. A BIS spokesperson also revealed at the time that the two colleges entered into “discussions” about possible closer collaboration with each other, although FE Week now understands that a merger between the two is unlikely.