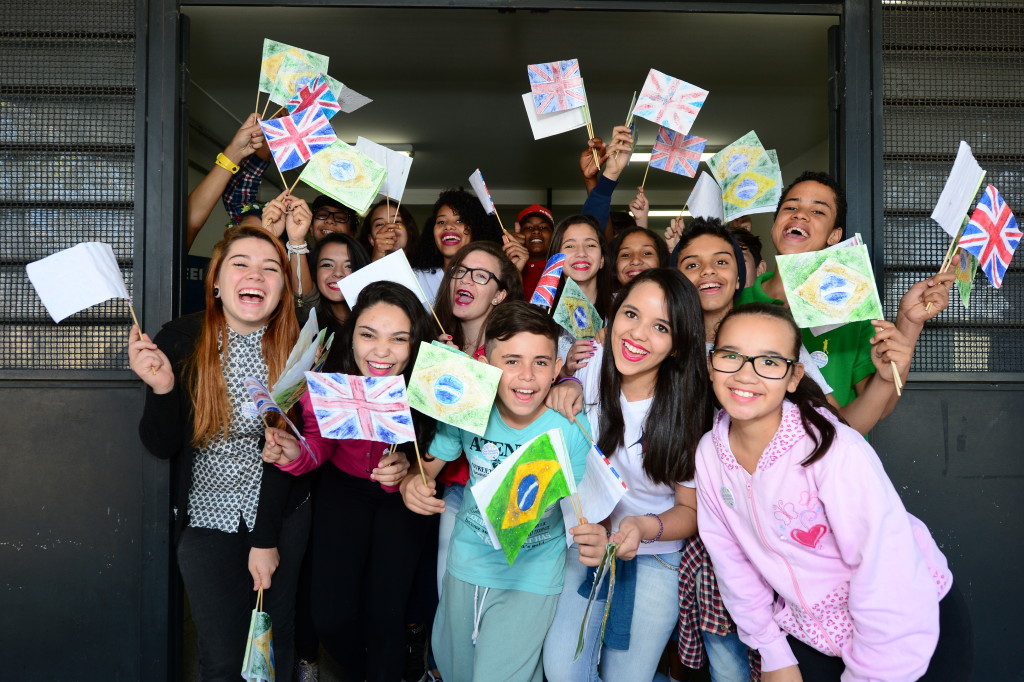 It had singing, it had dancing, it had speeches and it had an international flavour — no, it wasn’t the WorldSkills opening ceremony, but a hugely colourful visit to a Sao Paulo school by Team UK.

From a schoolboy violinist playing God Save the Queen to pupils dressed as the Village People dancing to Macho Man, every moment of the visit to Plinio Damasco Penna, in the north of the city, will live long in the memory of WorldSkills UK competitors.

The visit kicked off the day of the opening ceremony and came as part of the WorldSkills One School One Country programme in which all the competitor nations and regions are assigned to a local school where children then find out about their team, get to meet them the day before competition and present their findings to the competitors.

And the youngsters at Plinio Damasco Penna had four months to carry out their research, to produce a show with pupils acting out The Beatles’ Twist and Shout, among other impressive and fun representations of UK culture. They also put on demonstrations of their own culture.

Hairdressing competitor Eleni Constantinou, 22 and from Coleg Sir Gar and Tino Constantinou hairdressers, said: “It was really good to see how much they wanted to support us and how much effort they put into making us feel welcome.

“I wasn´t expecting to get an experience like that at all. It meant so much to see how they respected us and what we do. It really was lovely.”

School principal Adriana Cunha Premoli said: “We researched all about UK with the children, and thankfully some of our teachers have been there before.

“The children loved putting on the presentations for Team UK and we wish them all the best of luck for the competition.”

The arrival of British ambassador to Brazil Alex Ellis later complemented the morning, which got under way at around 9am with flag-waving children lining the school entrance for Team UK.

He told competitors: “A really big thanks to all of you for coming to Brazil. There are worse places to be, but thank you very much indeed for coming.

“It’s fantastic you’re here — have a great week. This country is all about that — I’ve never lived in a place with so much expression and popular culture. It’s like no other country in the world in that respect. Do us proud this week — be stars.”

He told FE Week: “The sheer exuberance of the welcome that was conveyed by the children and also the Team UK competitors joining in as incredible. There were more selfies being taken than I´ve seen all year. It was just terrific and it was great to see the ambassador come along as well and be part of the occasion.

“It was a big change from my day job but it was really interesting coming to see a school in a not particularly affluent part of Sao Paulo, but I’ve seen some great teachers and kids that want to build their lives and the skills that WorldSkills is about will help them build their careers and lives.”

Mr Ellis told FE Week: “This has been a fantastic visit. It’s great to have a host school go to such effort to impress our competitors and also for them to see a real bit of life in Sao Paulo. It´s not a posh end of the city, but you can see the amount of creativity and passion that exists in a place like this.

“I hope this visit will help the children here realise there is a world beyond Sao Paulo. This is a huge city of 20m people and so it can be hard to think of the world beyond. But there is Britain and a lot of the things the children were doing this morning, like singing and dancing, was related to the UK and that’s what I hope the children get — the idea of a world beyond and the UK should be part of that.

He added: “I used to be a teacher. My father was a head teacher and my grandfather was a teacher, so it´s great to get out and do things like this.

“And also we want to build up relationships at all levels in Brazil — it´s not just about me, it´s about all the people that come here from the UK and from WorldSkills. It´s about the kids in the school here and that we all understand a little bit more about each other — that is the best kind of diplomacy.”