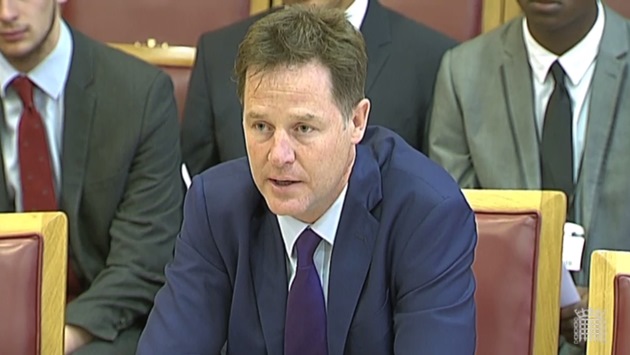 Former Deputy Prime Minister Nick Clegg revealed a “profound disagreement” over careers advice at the top of the last government and told a Lords committee that the current government was threatening social mobility by “undermining the FE sector”.

Mr Clegg (pictured above) made the comments during his appearance yesterday morning before the House of Lords Social Mobility Committee, which held its second hearing as part of an investigation into the transition between work and school.

The ex-Lib Dem leader, who had responsibility for social mobility in the Coalition, said discussions about ensuring careers advice was available for all young people was “two steps forward, one step back”.

“I won’t go into the gory details, there was basically quite a profound disagreement,” he said.

“A stand-off between people like myself, who felt it needed to be an integral part of the system and [then-Education Secretary] Michael Gove, who felt it didn’t have any role in designing an education system.”

He said his government had been right to replace the “failed” Connexions service, but there had been “two or three fallow years” in which there was a failure to find a replacement.

But he said the legal obligation of schools to secure impartial careers advice had been a step in the right direction and praised current Education Secretary Nicky Morgan’s efforts to ensure young people had access to careers advice.

However, he said he was “frankly, very disappointed indeed” by other steps made in the first few weeks of the new Conservative government, and warned the previous government’s work was being “undone”.

“There is just no remote hope for this government to ring-fence foreign aid, pensions, pensioner benefits, the NHS, defence and spend hundreds of millions of pounds on tax breaks for people who frankly are not very needy,” he said.

He was also asked by committee member Lady Sharp, the Lib Dem education spokesperson in the House of Lords, if he thought post-19 funding should be pooled with the rest of education, rather than being split across the Department for Education and the Department for Business, Innovation and Skills, as it currently it.

However, he said departmental responsibility was not the most important factor in ensuring successful policy.

“If the political will is there, it doesn’t really matter which department you’re in,” he said.

“You’re always going to have to put up with these slight baronial rivalries between them.

“What does make a massive difference is a centrally driven, clearly-expressed ambition from the top at all of government needs to devote itself to X or Y or Z aim.

“There is no surrogate for exercise of leadership from the top. You have to will the means, not just declare an affection for the end… as this government seems to be doing.”

When asked by committee chair Baroness Corston what their key recommendations were for the committee, Professor Roberts said the 2004 report 14 to 19 Curriculum and Qualifications Reform by Mike Tomlinson, calling for a unified curriculum and qualifications, including vocational education, from 14.

He said: “I think Allison Wolf’s recommendation for a training levy on apprenticeships is one way you might expand high quality apprenticeships, rather than the mixed bag we have now.”

Professor Green said: “We need to bring a coherence to the non-A level post-16 route. The government has a lot of initiatives but it hasn’t yet got a coherent structure in which to place those initiatives — and that should include careers guidance.”

The committee’s third hearing is expected to take place on Wednesday, July 22, but it is not known who the witnesses will be. The session will be covered live on Twitter by @FEWeek, using the #HLSMC hashtag. The committee is due to report its findings by March 23.