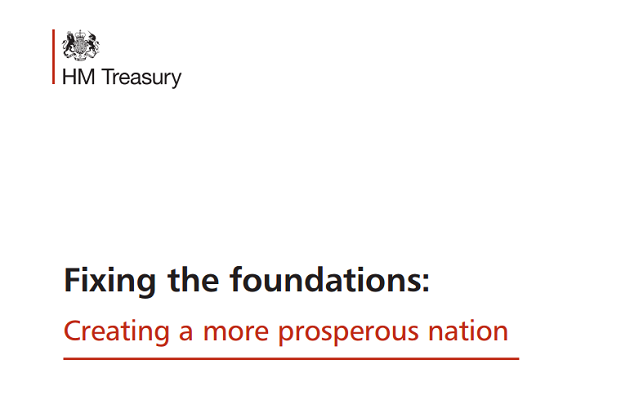 The Treasury this morning published its eagerly-awaited productivity plan. Here, FE Week examines the main headlines for the FE and skills sector.

Announced by Chancellor George Osborne during his emergency summer budget on Wednesday, the apprenticeship levy has already divided opinion in the sector. The productivity plan expands on the rationale behind the policy, but doesn’t offer further details, which will be confirmed in the autumn.

The report says: “The government will introduce a levy on large UK employers to fund the new apprenticeships. Levies to fund training are already in place in Germany, France, Denmark and over 50 other countries, often supporting high quality apprenticeship systems.

“The levy will apply to large employers and will support all post-16 apprenticeships. In England, any firm will be able get back more than it puts in by training sufficient apprentices. “The government will put control of the funding in the hands of employers via the digital voucher scheme to ensure that it delivers the training they need. Crucially, this will enable an increase in the quality of apprenticeships at the same time as an increase in quantity.”

Funding for 16 to 19 education is already issued on a per-learner basis, but the government seems to want to extend that to adults.

The report says: “The government will move away from the funding per qualification model for adult learners and, with input from local areas and employers, will develop options to ensure provision is targeted at training with the greatest impact.”

The government’s commitment to national colleges is well-documented, but Institutes of Technology are new, although the document is light on detail.

The report says: “The government will simplify and streamline the number of qualifications so that individuals have a clear set of routes which allow for progression to high level skills, rather than thousands of qualifications.

“The government will invite some colleges to become prestigious Institutes of Technology to deliver high-standard provision at levels three, four and five.

“Building on international best practice, Institutes of Technology will be sponsored by employers, registered with professional bodies and aligned with apprenticeship standards. The government will empower National Colleges, Catapults, and elite professional institutions to design each route, alongside employers and professional bodies.”

The last government was under a lot of pressure to improve both of these, but the plan doesn’t include anything it hasn’t said before.

The report says: “The government will improve destination data to enable informed choices. The government is supporting the development of online portals to present all post-16 learning options to young people in a user-friendly way, and is strengthening the provision of destination and earnings data.

“The new careers and enterprise company will encourage greater collaboration between schools, colleges and employers, helping young people to access the best advice.”

Involvement of regional authorities in the skills agenda was a well-publicised policy of the last government, so it’s no surprise to see their wish to extend skills devolution beyond its traditional flagship areas like Manchester and Sheffield in this report.

The report says: “The government will invite local areas to participate in the reshaping and recommissioning of local provision to set it on an efficient and financially resilient footing. A differentiated approach to local involvement will be adopted which will enable areas with the strongest governance and levers to shape provision, building on the skills flexibilities agreed with Greater Manchester, London and Sheffield.

“These devolution packages could be extended to other regions. The government anticipates that many colleges will be invited to specialise according to local economic priorities, to provide better targeted basic skills alongside professional and technical education, and that some will be invited to become Institutes of Technology.

“Following on from this restructuring process, the government will enable local involvement in the ongoing commissioning of provision, putting power in the hands of people who are best placed to tailor provision to local economic needs.”

Chancellor George Osborne said: “The only way to sustainably raise the living standards of the citizens of our nation is to confront the challenge of our lifetime, to raise productivity.

“This will not be achieved over night and will require a truly national effort by government, business and working people.

“But with this blueprint to fix the foundations of our economy, I believe that we have taken the vital first step towards securing the prosperity and a livelihoods of generations to come”.

Business Secretary Sajid Javid said: “This is a bold and ambitious plan, to achieve our vision of a more dynamic economy, with a business environment that fosters long-term investment, raising our living standards and become the best of all the major economies by 2030.

“The plan we are publishing today shows we are taking the decisions necessary to address issues of productivity and build a foundation for Britain’s future.”

More details about the new proposals in the plan are expected in the autumn.