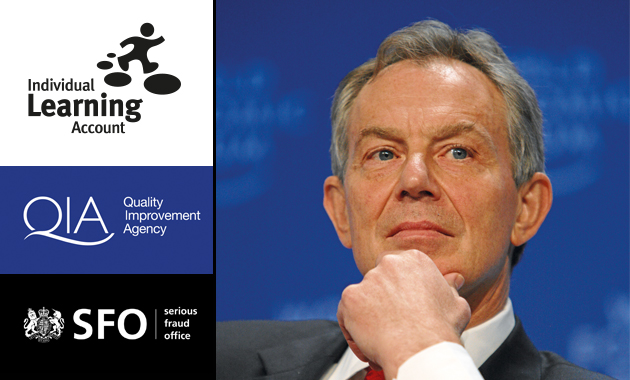 As the dawn of a new government with the possibility of a raft of new policies approaches, former FE lecturer, press officer and communications manager Anne Nicholls (pictured) considers some policies of old and asks whether they’re best left in the past, or ripe for reconsideration. Folks in the Westminster education and skills bubble have oft been accused of “collective amnesia”.

In its November report Sense and instability City and Guilds revealed how many of today’s policies were simply old ones recycled. But with 61 secretaries of state responsible for skills over the past 30 years it’s hardly surprising that there is little continuity.

Those of us who have been around in the sector for longer than two decades are suffering from an acute case of déjà vu.

As yet another “new” policy initiative jumps on the FE merry-go-round sending the whole sector into a tail spin, are we seeing a rerun of Groundhog Day?

I have worked in FE, intermittently, for nigh on 30 years — as an FE lecturer, journalist, press officer and communications manager, working for City & Guilds, the much lamented Learning and Skills Development Agency and others.

During this time I have witnessed the birth and demise of many policy initiatives, quangos and qualifications, from YOPS, TOPS and YTS, to CPVE, E2E, the FEFC and the LSC.

Some were great ideas but fell foul of the whims of different secretaries of state. Others were half-baked and not thought through properly. And some were just plain daft.

Here are my favourites.

Full marks to whoever invented the title for the least catchy acronym and most garbled strapline.

As an FE lecturer in my first job I recall sitting in a seminar listening to people enthusing about TVEI wondering when we would actually get to see inside a television studio.

Fearful of sounding ignorant, it took several weeks for me to pluck up courage and ask someone to explain what TVEI was.

In short, the idea was to inject elements of vocational education into the 14 to 18 curriculum — apparently a dramatic departure from previous education policies at the time.

But as with many initiatives it floundered because of alleged tensions between government departments which were issuing contradictory messages.

As the National Curriculum gained momentum and the (then) Department for Education and Science flexed its muscles, TVEI faded away.

However, at a seminar organised by Pearson recently, there were hints that TVEI might make a comeback. Let’s hope they call it something else in case we think it’s all about television.

The unfortunate acronym PICKUP made this initiative sound like an old dust cart.

It was a government-funded scheme that encouraged colleges (and universities as well) to provide courses for industry and businesses designed around their needs.

Funding was also made available for college lecturers to gain relevant experience outside education.

I took advantage of this by spending three months working on a magazine and then left to forge a new career in journalism and PR. I’ve never looked back.

What exactly happened to PICKUP is not clear. It probably suffered the same fate as other good ideas — running out of money and steam. But the mantra that colleges need to be more responsive to the needs of employers continues.

Rewind back to the mid 1990s to a different world when money was plentiful and colleges were being invited to set themselves ambitious expansion targets.

One way of expanding was through franchising — subcontracting to other providers and collecting public funding for courses that colleges sold to organisations such as local businesses.

But it all started to unravel when the Serious Fraud Office was brought in to investigate the misuse of public funds by some colleges, with allegations of “phantom students”.

A report in 1999 revealed that Halton College, in Cheshire, was unable to justify spending more than £6m of public money and accused staff of taking unnecessary expensive overseas trips.

One scam was claiming money for students on franchised courses based in Scotland, who were not eligible for funds from the English funding council.

Halton was not an isolated example. One school was said to be running courses for three colleges, using the same students and therefore getting triple payments.

But franchising, of course, is a perfectly acceptable way of operating. Many universities have sub-contracting arrangements with FE colleges to deliver their courses. But, since the scandals of the 1990s, lessons have been learned and the franchising option is no longer a gravy train.

The idea behind the ILAs was to provide tax incentives and cash contributions to encourage individuals and employers to invest in learning — particularly in IT skills. Individuals were asked to put £25 of their own money into an account while the government provided £150. Sadly, these good intentions were open to abuse.

Some employers bought ILAs from corrupt learning providers and cashed them, knowing that no-one could check on whether learning had been delivered.

ILAs were a great idea that failed because they were open to abuse. There was some talk, in 2006, of reviving the ILAs but they seem to have dropped off the policy radar. Worth looking at again, maybe?

Functional Skills, Life Skills or Key Skills? They all do much the same thing — trying to get people up to a basic level of competency in literacy, numeracy, IT and being able to hold down a conversation without saying “Errrr”.

While at the Learning and Skills Development Agency I observed the large amounts of money being pumped into providing training and resources for teachers.

The Key Skills qualification, along with Functional Skills, came under attack in the Wolf Report (2011) for being “very easy to pass” and serving the funding requirements of providers rather than the needs of learners or employers.

The solution? Get everyone to study for GCSEs in maths and English — a bit like getting someone to keep on retaking their driving test when all they want to do is ride a bicycle. Thankfully, one or two people have realised the problem.

The Diploma of Vocational Education (2004-7)

After much cogitation and consultation, the Diploma was launched a decade ago as the definitive solution to the age-old debate about vocational-academic parity.

A-levels and GCSEs would remain, keeping the gold-standard pundits happy, but they would be encased in a building block-style framework where students could take vocational subjects as well.

To the pre-war generation it sounded like a revival of the old matriculation.

Huge efforts were put into developing materials and training programmes to get teachers ready for the Diploma, due to be phased in from 2008.

But sources in Whitehall hinted that it was running into problems with fears of a “two-tier system”.

The outcome? Apparently, my sources tell me it was Blair who rejected the Diplomas.

Was it a mistake? My view (and that of some politicians) is that we could have got it right, but like many good ideas the Diplomas were not given enough time to bed in and became the victim of political whims.

Pearson’s crystal ball gazer (alias Steve Besley) has intimated that the Diploma might yet make a comeback.

The what? Don’t worry if you’ve never heard of it. Hardly surprising as it lasted just two years (I worked for them for just a month), but then the average lifespan of a quango is only eight.

The QIA was formed out of the Learning and Skills Development Agency which had done an excellent job by combining policy and practice with a foot in both camps.

This meant they were able to understand the needs of teachers and policy makers. But the cry from Whitehall where contestability was the buzzword was “You can’t have an agency doing commissioning and delivery”. Errrrr, why not?

The idea behind the QIA was that it would do the commissioning and others would do the delivery. But after two years people realised that the organisation needed to be owned by the sector, not part of government.

So the QIA morphed into the Learning and Skills Improvement Service (LSIS) which was emphatically not a quango. Sadly, LSIS is no more either, having morphed (well, sort of) into the Education and Training Foundation.

My final choice is a good example of a Groundhog Day initiative. As described on the City & Guilds website, the TechBacc (the Technical Baccalaureate) is “an entirely new professional programme designed to give 14 to 19-year-olds an exciting alternative path towards an apprenticeship, higher education or employment”.

It continues by explaining that the current education system is not adequately preparing young people for the world of work and that many of the current qualifications are old, tired and not relevant to today’s industry needs. Bravo.

But the TechBacc is not a new idea. Trawling through my memory (and the internet) I recall that City & Guilds launched a Technological Baccalaureate (note the slight difference in terminology) back in the 1990s.

It was developed jointly with something called the CTC (City Technology Colleges) Trust – another initiative that has faded into history.

The original TechBacc was designed to “achieve parity of status between academic and vocational qualifications”. Now where have we heard that before?

Nevertheless, the current TechBacc sounds like an excellent initiative. Let’s hope that it’s given enough time to bed in without becoming a victim of short-termism.

So there we have it. Eight prime examples of ideas — some good and some flawed — that were launched with much gusto that have bitten the dust or morphed into something else. “They say that insanity is doing the same thing over and over again and expecting different results. It would be madness to ignore the evidence of three decades of skills and employment policy — yet our politicians have failed to learn from the past,” said City & Guilds Chairman Sir John Armitt.

So perhaps when the next government launches a “new” initiative with a “vision” to bridge the academic-vocational divide or make qualifications more relevant to employers, instead of indulging in collective amnesia civil servants should delve through the archives … or maybe just talk to a few people who’ve seen it all before.

Main pic: Clockwise from above: Tony Blair was said to not be a fan of the Diploma of Vocational Education during his time as Prime Minister and it ended the same year as his time in Number 10; the Serious Fraud Office looked into the issue of franchising during the practiceÕs seven-year lifespan in the 1990s; and the Quality Improvement Agency (QIA) for Lifelong Learning was one of the shorter-lived FE policies, lasting just two years. It was second only in Anne NichollsÕ list in terms of length of existence to the Individual Learning Account