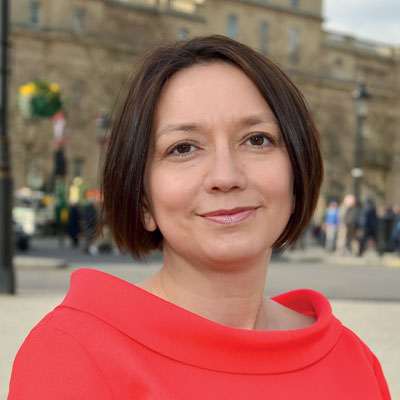 “I guess research is just about being nosey. Nosey and methodical — that’s what makes a good researcher,” says Dr Fiona Aldridge, assistant director for development and research at the National Institute of Adult Continuing Education (Niace).

But, as we chat on the dark day the skills funding letter is published, I get the sense that, with an 11 per cent cut in next year’s adult skills budget, there’s one set of numbers she might not be so keen on.

The problem is, she says, the numbers are being viewed in the wrong way. Aldridge with father Geoff graduating from Leicester University in 1996

“It’s a really hard time to argue for more money to be spent on anything given public finances, but investment in education is an investment — not a cost,” she insists.

“It’s investing in the skills of people to get jobs, progress in work, to develop the skills to support their home, their community and their society.

“We should be concerned therefore about the impact reducing that investment has on people’s opportunities to take part in learning.

“Of course there are loans around for people who are convinced of the benefits of learning, but for those people who are not yet certain that its valuable to them then it could have a massive impact on numbers.”

Aldridge, aged 39, began working for Niace 18 years ago, almost by accident after being sent there from a temping firm while she worked out what she “wanted to do with my life” – but quickly decided she might have already found it.

“I suppose I loved the idea that it was about people and people’s opportunities to realise their ambitions,” she says. “And therefore to work on a policy level or a practical level to help create more and better quality opportunities for adults to learn is just so enthusing and motivating.”

But what really convinced her to stay was an episode in her mid-20s that ends with her being splashed across the front page of the Mail on Sunday.

“It was when a dispersal policy had been introduced and around 400 asylum seekers were sent to Leicester and all the media work was negative,” she explains.

“And we were doing a tiny, tiny piece of work on asylum seekers — the skills and qualifications and experience they were bringing with them.

“And the local paper knew about it and was owned by the Mail — so the headline was ‘NHS gives nurses’ jobs to asylum seekers’.

“Well, we weren’t working with the NHS, and asylum seekers can’t work and we weren’t trying to get them jobs, but apart from that it was right.

“I was really young and just horrified that there was a quote on there that had been taken out of context and Ann Widdecombe said I was increasing Britain’s reputation as a soft touch nation. I thought I was going to get the sack.”

“The support, the encouragement and that sense of ‘let’s do the right thing here for learners, take risks but not dump it on you if things go wrong’ made me think that was a place I’d quite like to work.”

And Niace’s emphasis on family learning, where parents learn alongside their children and in turn help them learn, chimed with her own experience of education growing up in Walsall with parents Geoff and Maureen, and younger brother Andrew.

“My parents are from a working class background, with not great educational achievement but a real strong sense of the value of education so they really invested in my education and supported it,” says Aldridge.

“My dad left school at 13 and hadn’t had a great education and went to be a bus driver and he hated it. “He would say to me: ‘You need to work hard at school, because you need to have choices about the job you do’.”

One of her strongest memories, she says, is of him staying up late with her whenever she had to study.

“He was never in a position to be able to help me with my maths A-level, but he would just always be there so that I wouldn’t be on my own for that.”

After passing the 11-plus and attending grammar school, she became the first person in her family to go to university, studying economics at Leicester.

A gap year followed academia and then came the post at Niace, which she has seen grow from 40 people to 65. She has also extended its research work and, she says, expanded its focus from community learning into workplace learning.

Indeed, Aldridge manages the annual participation survey, measuring how many adults throughout the UK are accessing education.

“What always comes out in the survey is that, apart from the massive inequalities for learning, for those who are in those groups that are most unlikely to learn, the place where they are going to get those chances is going to be in work,” she says.

“So actually that’s a key area for us — if we’re interested in adults having the opportunities we had just by going through the system in a particular way then we need to be focussing on work.”

It’s a really hard time to argue for more money to be spent on anything given public finances, but investment in education is an investment — not a cost

But a bigger change for Niace could be looming on the horizon, after the organisation announced a “strategic alliance” with the Centre for Economic and Social Inclusion (Inclusion) – which could, if successful, lead to a merger later in the year.

“I’m really excited about it,” she says.

“I’ve worked with them for quite a long time and it works well, because they have the same approach to work, tackling inequalities and disadvantage.

“And lately we’ve been trying to think more about skills in the workforce and employment systems, and they’ve been doing more work around what we’ve been traditionally doing so we’ve been bumping into each other more.

And, with an election coming up, the stakes are high.

Coming into the election, she says, “we really need to show the adult skills budget is an investment the country can’t afford not to make”.

“We need people to have the opportunities to take part in learning that will bring benefits to their working lives, their social lives, their families their communities and to the local economy and to be able to make that as easy as possible for employers and individuals and providers,” explains Aldridge.

“It would be great to see some creative ideas on how to make that possible.

“It’s a shame that money dominates everything, but it’s about what we can do within that context to create good, high quality opportunities for people to take part in learning.”

I don’t have a favourite book, but I love to read. I’ll read a book and really enjoy it, but then just move on. At the moment I’m reading Dominion by CJ Samson, about the dangers of being overly focussed on nationalism — it’s a story that’s meant to be a million miles away from where we are, but it feels scarily close. Aldridge and husband Ian on their wedding day in 1999

I like novels that give you an insight into different people, cultures and possibilities

I have three children so essentially I just walk through my front door and then I’m switched off, because children aren’t very forgiving of the day you might have had at work. I like to read spend time with good friends and family

A good dinner party for me is fun, so I’d like comedians Rob Brydon, Lee Mack and David Mitchell because they’d keep me laughing
all night

I went through a stage of wanting to be Prime Minister until I saw Spitting Image and then I thought I wouldn’t want anyone to ever do that to me. And then I wanted to be Kate Adie — she just seemed so strong and intelligent and thoughtful