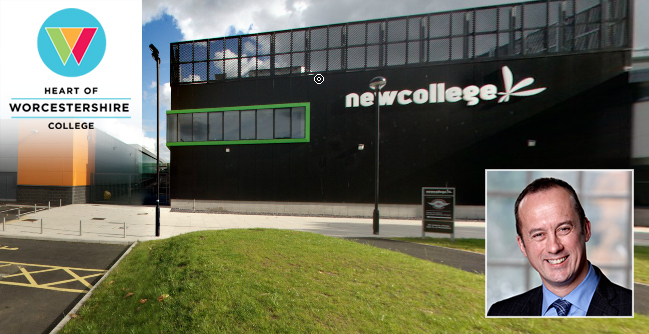 Two Midland colleges set to merge next month have won approval for their new name from Skills Minister Nick Boles after a local MP said their first suggestion was “an aggressive act” towards nearby competitor colleges.

Conservative MP for Mid-Worcestershire Sir Peter Luff (pictured below right) had complained the name was “insensitive” to other colleges in the county, but he was happy with their ‘Heart of Worcestershire College’ proposal — and so was Mr Boles, a spokesperson for the Department for Business, Innovation and Skills told FE Week.

It comes with Worcester College of Technology principal Stuart Laverick (pictured above, bottom right) having been announced as the merged college’s first principal, from August 1.

He said: “We are extremely pleased that the new name has been approved by the Skills Minister. Although finding a suitable name has not been easy, we believe that this name truly reflects the values of the new organisation. He wrote a strongly-worded email to college bosses about their first suggestion, saying: “Sorry to be negative, but it is a grossly insensitive name when you are not the only FE college in the county, but one of three.

“South Worcestershire and Pershore [which is situated in Worcestershire, but part of Warwickshire College]… are excellent institutions that would be marginalised by the name chosen.

However, Mr Luff had already welcomed the second suggestion and today said: “This is a very sensible outcome. The previous name would have been very misleading and undermined the other colleges in the county. The new name is much better.”

The merged college will cater for around 10,000 students in total and employ around 1,000 staff. A spokesperson for the colleges said the new website address would be howcollege.ac.uk and added that new email addresses were yet to be finalised.