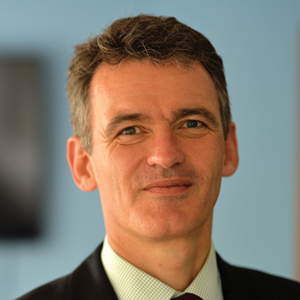 A former principal, chartered accountant and civil servant who pioneered online procurement for colleges and the Skills4Life initiative, Mark Dawe already has an impressive career under his belt.

And at the age of 46, with a cycle challenge involving four of the French Alps on the horizon, it would appear the sky really is the limit for the chief executive of the OCR awarding organisation.

The son of Ruth, a stay-at-home mum and hospice volunteer, and Roger, a civil servant who was the first director general of the Manpower Services Commission and private secretary to Prime Minister Harold Wilson and three employment secretaries, the young Mark grew up in a world which revolved around skills. Dawe as a boy with father Roger Dawe

“I used to go to football matches as a kid with Michael Foot sitting on one side and my dad sitting on the other,” says Dawe.

But a flair and passion for numbers, discovered after doing VAT returns for a family friend while in his teens, propelled Dawe into the world of accountancy following his education at Trinity School, Croydon, and Cambridge.

After a six-week internship at KPMG during his final summer of university, Dawe was offered a job. He stayed for four and a half years, and although it was itchy feet that made him look for work elsewhere, it was the incorporation of colleges in the early 1990s which led Dawe into the FE sector for the first time.

He joined Canterbury College, under the leadership of sector stalwart Susan Pember, who would go on to have a big influence on Dawe’s career.

“I started just after incorporation, when they needed accountants all of a sudden,” says the father-of-four.

“When I had that interview, I saw that the post above me — the deputy principal in charge of the non-academic side — was vacant, and I asked if she could keep that vacant for a year to allow me the chance to go for it, and she did, and I got it.

“She has obviously had a big influence on my career and my success.

“I was at Canterbury College for about seven years, and again, I think one of the things Susan recognised, if I had just been doing the job, the normal job, year after year, I would have got bored and left, so she kept throwing stuff at me.

“We won the prison contract in Kent for 11 prisons, we built a new college on the Isle of Sheppey, we had a PFI, we were one of the PFI college leads for redevelopment, so lots of things that kept me interested and gave me a wider view on my job.”

But after several years at Canterbury, Dawe saw a gap in the market which led to the foundation of e-Government Services (eGS), a business set up in partnership with Liam Byrne, now Shadow Skills Minister.

He says: “I was sitting there looking at all these businesses that were getting millions of pounds worth of funding, and as far as I could see they had no business model behind them, and it seemed crazy. So I wrote one, then the college allowed me a couple of days a week secondment to the Association of Colleges, and I basically went around with this model, which was around online procurement and a portal for the college sector, and went around touting it to venture capitalists to get funding.

“Liam Byrne brought to the table the technology partner and a more worked-up business case around local authorities. I was the FE arm and he was the local authority arm, and then it grew to around 30 to 40 people.

“That was a fascinating three or four years with him, and it still exists, but it’s much more of a consultancy now.” Upon leaving eGS, Dawe was re-united with Pember when he became her deputy at the Department for Education and Skills, taking responsibility for the Skills4Life programme, a project he remains incredibly proud of to this day.

“Across government, it was the best performing delivery unit,” he says. “Susan did a fantastic job there, and it benefited from having a mix of outstanding civil servants, and people from the outside, and the combination of the two worked really, really well.

“There was enormous tension all the time, because you are butting up against different cultures and different ways of doing things, but it meant that a number of us understood what was needed to get this delivered on the ground, and another group knew what needed to be done to get the traction across government.

“Millions of qualifications were delivered. Obviously the focus of it has drifted away a bit, but you are seeing the publicity again around English and maths and how important it is, so I think it will have a rebirth.”

During his time at the department, Dawe was also a governor at Lewisham College, then under the leadership of Dame Ruth Silver. It was this role which influenced his decision to return to college life as principal and chief executive of Oaklands College, in Hertfordshire, where the first thing
he secured was investment in the college estate.

But his time at Oaklands, despite a transition over five years from satisfactory in 2005 to good four years later, was not without controversy.

He says: “I changed the staff contracts so there were no contact hours. I removed them, so it was a 37-hour week. I had the national office of the University and College Union fairly permanently in my office saying I couldn’t do it, but we did.

“The union’s argument was that it’s fair that everyone should have 21 hours contact, and this amount for prep. I felt that was highly unfair where you had an A-level teacher teaching English language, let’s say, with loads of prep and marking still having to fulfil the 21 hours contact, whereas you might have a construction lecturer who had a technician who was doing all the prep. To me, there wasn’t parity.”

By 2010, Dawe was ready to leave Oaklands and made the decision to cross to the “dark side” of awarding organisations, which he describes as “niche, very exciting”. The job at OCR also afforded him the opportunity to move back to Cambridge. Keen cyclist Dawe on his bike in Cambridge

He says: “The job was looking for government experience, business experience, and education experience. So I ticked all three, and for me it was a national role, it was an area which I hadn’t been directly involved with before and also involved general qualifications and vocational.

“I had done a lot of work with schools at the college but actually had not been so directly involved in the GCSE and A-level side of things, so that really appealed. And it was at a time when I had been driving the use of online learning at Oakland, so we had a Moodle VLE, and I was making sure every course was on that over the five years, which was hard work.

“I came here with that vision of how we could drive and develop that. At Oaklands, out of £1m of exam fees, I think OCR had about £22,000 of it — so there was something wrong on the vocational side. OCR wasn’t delivering what it could be delivering, particularly in the vocational FE sector.”

It’s Not About The Bike: My Journey Back to Life by Lance Armstrong. Obviously at the time of reading that he was this great hero, and he was a great hero to me in terms of what he had achieved, and I was really saddened when I heard about the doping scandal because I had been defending him as well for many years

I hate queues. Traffic queues, underground queues… so I prefer to run the gauntlet of riding a motorbike or bicycle in London rather than queue up in traffic

Cycling is my big thing. It always was. I used to cycle to school, I started racing at university, I raced for a number of years — and then it got pushed to the side a bit but I have picked it up again over the last year. I’m doing a charity ride in July, it’s called La Marmotte in France, it’s 110 miles with 5,000m of climbing in a day. I have been training hard — twice a week when I’m not full of a cold and stuff. I’ve been getting up at 4.30am, out at 5am for three hours, ride 55 miles into work for 9am

My granddad, who was a head teacher for many, many years — at the time I knew him I hadn’t had any experience in education, obviously, so it would be fantastic to sit down

From the age of 13 or 14 I wanted to be an accountant, as sad as it sounds