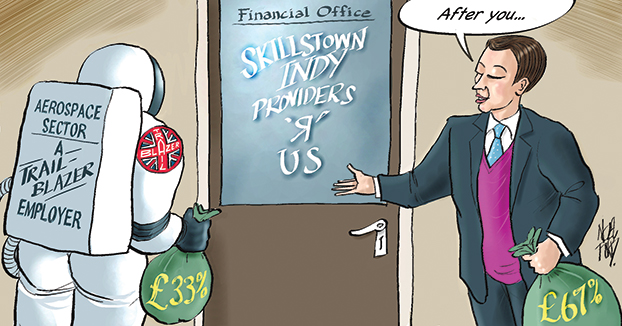 The newly-announced apprenticeship funding system in which employers will contribute 33 per cent of the cash has been described by Association of Employment and Learning Providers chief executive Stewart Segal as “no simple system”.

The Department for Business, Innovation and Skills (BIS) had described the employer-led pilot model for the first Trailblazers’ group — made up of employers and professional bodies in eight sectors including aerospace and electrotechnical — as “simple”.

But Mr Segal said its “variables are quite numerous”.

Delivering a webinar on the reforms on Thursday (May 29), he said: “You can summarise it in a clear table, and yes, what we’re moving from is a payment for every individual framework qualification to an overall payment, an averaging payment, but it’s the combination of all those different elements which means it’s still very difficult to know how much you’re going to get for each apprentice.”
He added: “This is no simple system. The variables are quite numerous.”

Meanwhile, other sector groups have welcomed the new system, but conceded the trial run would be a learning curve.

Teresa Frith, senior skills policy manager for the Association of Colleges (AoC), said: “There is currently no cost to employers for 16 to 18-year-olds, but the new government one-off payment shows they recognise that employers may need to invest in additional training for young apprentices.

“It is important to remember that this is a trial and it is difficult to predict how employers will respond at this early stage. We must learn as much as we can from this trial to make sure that when the funding changes are rolled out across the whole range of apprenticeships, they benefit both the employer and the apprentice.”

Employer-led apprenticeship reform has been a key theme of Skills Minister Matthew Hancock’s time in office, and he has previously said he wants it to “become the norm for young people to go into an apprenticeship or go to university or do both in the case of higher apprenticeships”.

A technical consultation on funding reforms that ended on May 1 attracted more than 1,200 responses.

“The results and next steps will be announced in the autumn,” said a BIS spokesperson.

John Allan, Federation of Small Businesses national chairman, said: “We welcome the move to create an apprenticeship system that puts employers in the driving seat. However, as BIS research has found, there is a risk that setting the employers’ contribution too high will put some businesses off hiring an apprentice.

“A reformed apprenticeship system should be simple, easy to navigate and the phasing of payments and grants must be designed in a way that does not harm cash flow.

“While we welcome the proposed additional grant for small businesses, getting the design of the system right is crucial and it must avoid unnecessary administrative burdens.

“This is critical to maintaining and, hopefully, increasing the number of small firms that take on apprentices.”