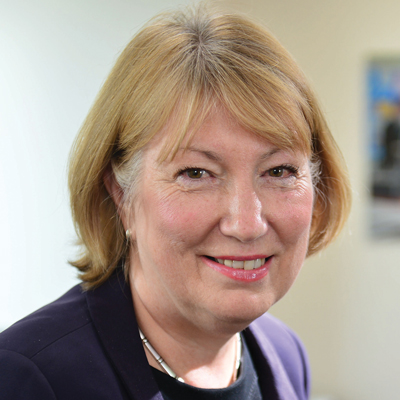 She is charged with keeping England’s FE colleges and independent learning providers on their toes, but Lorna Fitzjohn hasn’t let go of her rural roots.

The new Ofsted director for FE and skills, who replaced Matthew Coffey last month, says she still takes time off in lambing season and enjoys helping out on the working farm in Hertfordshire she calls home.

Born in Welshpool, mid-Wales, in 1956, Fitzjohn grew up in a rural community and attended local schools where her father knew all the staff before training to be a teacher herself. She is no stranger to transition, having been catapulted fairly early in her career from tiny primary school classrooms in Wales to large institutions in London.

“When I came down as a primary teacher to London, I had more children in my class than there were in the whole school when I started in a primary school,” she says.

“One was very rural and the other was a very urban setting, so it was a substantial change but I very much enjoyed working in those kind of environments, particularly in London.

“I had lots of opportunity for promotion within the primary sector, but more importantly, the bulk of my time has been spent teaching in FE and in management roles in FE.”

By her own admission, a career in FE was not something Fitzjohn had considered until a friend approached her about working in a college. By then a mother of three young children, she accepted the offer and never looked back.

“I went in as a part-time lecturer for two hours a-week, and I loved it,” says Fitzjohn, who completed a master’s degree in business administration at the University of Hertfordshire in 1998.

Rising through the ranks in FE, the frustrations which plague professionals across the sector were only too familiar for Fitzjohn.

“I’ve always been very learner-centred,” she says, “and I suppose the frustration with me sometimes, in FE, is that some of the colleges might have lost their way a little bit in that they spent more time than I wanted to talking about premises and buildings, and perhaps the financial side.

“Important as they are, I have always wanted to be very much centred around learners and learning and the quality of teaching, and getting learners from their starting point to where they need to be.

“And what appealed to me in FE was the employability side of it — you are preparing people for employment, ultimately — so you’ve not only got the qualifications that they need to get, but also that more well-rounded education with them as individuals to do with their attitudes and behaviour and where they wanted to be, things like work experience, things about linking the workplace to what they are learning at college, was always, you know, an exciting part of it for me.”

While in a senior post at Oaklands College, in Hertfordshire, Fitzjohn was approached and asked to join the Training Standards Council, which then became the Adult Learning Inspectorate before it merged with Ofsted in 2007.

She says her teaching background had prepared her well for inspecting.

It’s really nice to get home and deal with some of the — perhaps you might call mundane — parts of farm life, like looking after animals. I think that’s a nice balance, actually

“I actually think that being inspected yourself is a very good training ground for how you want to be treated when you are being inspected,” she says, “so my experience of being inspected and how much I valued the feedback that came from inspectors, and their view of what we were doing, and the respect they showed me, is what I think we then need to do when we’re inspectors.

By the time of the merger with Ofsted, Fitzjohn was already in a management role, and would go on to become deputy director for FE and skills, and role in which, she says, she was keen to make a difference.

“The sector is changing, policy’s changing, the economy has changed since I have been working, so we’ve got to move with the times.

“So actually, changing and moving the framework and, inevitably, raising the bar in the framework, as we do, is an important part of it. I enjoy doing that. I enjoy doing the policy work. I have particularly enjoyed working with people in the sector — the Association of Colleges, the Association of Employment and Learning Providers, 157 Group, the wide range of stakeholders that are out there — as well as learners and parents, but particularly employers, to get their view of how useful inspection is.”

Despite being in what many in the sector might see as a desk job, Fitzjohn has no intention of staying seated. She retains her brief as a regional director and, living on a farm in Hertfordshire, hopes to split her time between London’s Ofsted HQ near Holborn and her office in Birmingham.

She says: “I wouldn’t want it to be a desk job. I’m also regional director for the West Midlands, so I have kept that role.

“That’s really useful because it does actually give me an oversight of provision, right through from early years, through schools, FE and skills, social care, so right across whatever happens in the West Midlands. Lorna Fitzjohn and her dog, Dylan, out for a spin on the tractor at her farm in Hertfordshire

“I’ve got a team of senior inspectors who work for me, some of which are specialists in FE and skills, some in schools, some in early years — so, that role, but also then the policy role, is I suppose a general overview of how effective inspections are. I need to keep tabs on government policy, I need to keep talking to the sector, I need to involve myself with employers and learners.

“I will certainly be out on inspection where I get the chance. I don’t have time to lead inspections any more, but actually getting out there and talking to people is the best way of finding out the impact of what we do. Because it’s really important that we have that kind of impact.”

Fitzjohn says she still enjoys life on the farm near Bayford, Herts, run by farmer husband Alan, and adds that her slightly unusual home life is often a talking point.

She says: “People have almost always got someone in their family who has been involved in farming, so they are interested in that bit of it. Actually it’s really nice to get home and deal with some of the — perhaps you might call mundane — parts of farm life, like looking after animals. I think that’s a nice balance, actually.”

And with two grandchildren of school age and a son just starting an apprenticeship in engineering, Fitzjohn certainly has her eyes and ears in education, beyond those of her trusty inspectors.

So many, it is difficult to choose, but I would have to say The Kite Runner by Khaled Hosseini

What do you do to unwind after work?

I live on a farm, so there is always plenty of farm work to do

Who would you invite, living or dead, to your ideal dinner party?

Verdi, a farmer and composer who not only composed beautiful opera but was a compassionate human being