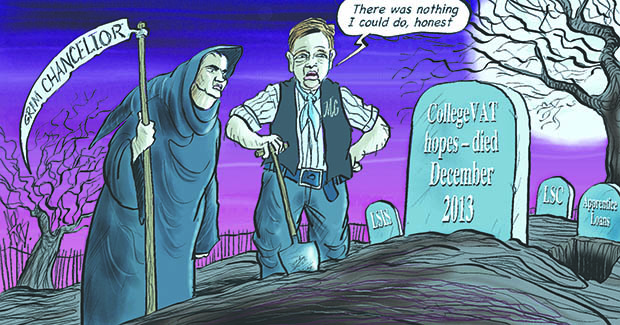 Hopes of a VAT refund for colleges look to have finally ended with Education Secretary Michael Gove admitting his hands were tied by the Treasury.

All 93 sixth form colleges in England, along with general further education colleges, pay VAT on goods and services, while schools and academies are reimbursed.

The Sixth Form Colleges Association (SFCA) has long campaigned for the “anomaly” to end, but Treasury Minister David Gawke said the policy would continue.

And Education Secretary Michael Gove said he was unable to secure funding from Chancellor George Osborne to address the issue.

James Kewin, SFCA deputy chief executive, said: “We are very disappointed that the government has decided not to address this longstanding anomaly, particularly when year on year funding cuts are pushing some sixth form colleges to breaking point.

“In that context, and when the government is meeting the VAT costs of new and untested 16 to 19 providers such as free schools and academies, this can only be described as a senseless decision.”

A cross-party group of 74 MPs had written to Mr Gove in October in a bid to change the situation, following a pledge from David Cameron, during Prime Minister’s questions on October 9, to “look carefully at the issue”.

The VAT issue is believed to cost sixth form colleges an estimated £30m per year and, according to research from the SFCA, has resulted in colleges being forced to drop courses such as modern foreign languages and further maths, as their funding reduces.

But Mr Gawke said in a Westminster Hall debate in parliament on December 17 that the Department for Education (DfE) had “considered whether adjustments could be made to funding for 16 to 19 education to recognise the differential VAT treatment of different types of providers”.

He said: “In particular, the DfE has considered whether it could additionally fund sixth form colleges by an amount equivalent to their typical VAT costs. The DfE has concluded that that is not affordable in the current fiscal climate.”

He added that while it would cost £20m to reimburse sixth form colleges, this would lead to the inclusion of general further education colleges as well, pushing the costs up significantly.

“Extending extra funding to FE colleges, which have a similar case to sixth form colleges, would cost some £150m,” said Mr Gawke.

However, Mr Gove acknowledged the case for change when he was questioned by the Education Select Committee the following day.

“There are some historical anomalies, not least the fact that sixth form colleges are treated differently in respect to VAT. I’d love to be able to [change] that, but money is tight,” he said.

“We looked at it before the autumn statement and the case is clear and strong.

“If I got more money from the Chancellor then I would like to and if we can be certain that it will be spent effectively, and there’s no doubt that sixth form colleges do, then I’d love to be to address that anomaly.”

When asked if he could put a timescale on potential change in the future, he said: “I’d like to but the Chancellor wouldn’t let me.”

Julian Gravatt, assistant chief executive of the Association of Colleges, said: “We are disappointed that government isn’t planning to act on the absurd anomaly which means that 16 to 19 free schools get VAT, but 16 to 19 colleges don’t.

“VAT law is fiendishly complicated with UK-wide and EU implications, so we’ll be pushing DfE to ensure that students are fairly funded wherever they study.”