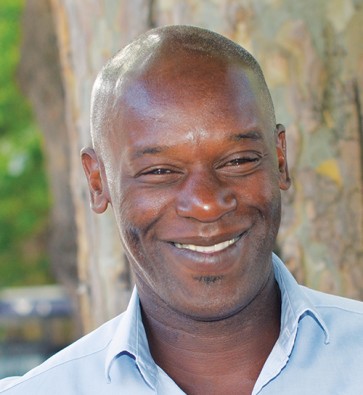 Further education was the “key to freedom” that was handed to lifelong criminal Frank Harris while he was behind bars for attempting to smuggle cannabis into the UK from Amsterdam.

The chance to study just a couple of GCSEs helped him turn his back on a life of crime that stretched back more than a quarter of a century.

With the support of prison charity the Foundation Training Company (FTC), he made the pivotal choice to go straight when he came out of prison almost a decade ago.

And now 53-year-old Harris returns — minus a criminal conviction — to pass on the FE message of hope to others.

“Further education in prison stopped that cycle of being in and out of prison for 30 years,” says the grandfather-of-two, who is now in the second year of a University of East London criminology and criminal justice degree.

“It is the one thing that gave me the key to freedom, and I am continuing that journey through education.”

Harris was in Hertfordshire’s Mount Prison when he took two GCSEs, achieving an A in English and a B in maths.

They set him on a path away from crime and along which he has worked with a range of substance misuse charities including Turning Point, St Mungo’s and Crime Reduction Initiatives (CRI).

He now mentors offenders at Brixton Prison where he sees his mistakes being relived by others — but he also hopes his FE redemption can be relived, too.

“It’s not hard work, but it is sad as far as I see it — you just see a lot of wasted energy and talent,” says the Londoner.

“Obviously people need to be in prison — it’s there for a reason, but you meet many who make you think, ‘You don’t need to be in here, you’re just not listening, and you therefore might be back in here again’. It can be disappointing.”

The son of Jamaican immigrants, Harris grew up as one of five siblings. His first conviction came before he’d even hit his teens, in 1969, for shoplifting.

“I didn’t do crime to support anything,” he explains.

“I did it because where I was born that’s just what everyone did and that’s how I grew up.”

At the age of 14 he was expelled from school in Bethnal Green for arguing with teachers and fighting and, unable to get into another local authority school, he was sent to Oak Hall boarding school in Sussex, where he counts former world champion heavyweight boxer Frank Bruno among his classmates.

“I don’t think my mum could manage me with four other children,” concedes Harris.

Oak Hall, now closed, was situated within a rural setting and pupils could do outdoors activities such as horse-riding, as well as taking weekly trips to the seaside, but, says Harris, says there was no “formal” education.

“When I was 16 I ran away from there — there was no education stimulus. That was when I really got into offending behaviour,” he says.

At the age of 21, Harris was inside Wandsworth Prison having for the first time started a sentence alongside adults rather than just young offenders. He also found himself taking drugs.

Continuing in a downward spiral over the next three decades, he racked up around 40 convictions, including theft, drug smuggling and fraud. He also spent time when not in prison homeless.

But Harris’s yearning for a new life first emerged in his mid-twenties, part-way through another sentence. He remembers the heartache of hearing about the birth of his first son from behind bars.

“The prison warder said to me, ‘Mother and baby are doing fine.’ But I was in prison,” says Harris, who has three sons — Cane, Ellis and Jason — and a daughter, Frankie.

But he did get back into trouble and was in prison throughout his late thirties and early forties before in 2004, aged 43, FE came knocking while. He was serving a four-year jail term at the time for attempting to smuggle cannabis from Amsterdam.

“My children were getting a lot older. I should have sorted it out at an earlier stage, but when you haven’t had experience in the classroom for many years you lose confidence,” says Harris, whose grandchildren are called Nera and Esra.

“I started off by just going into the library to read. It was attached to the education place so I finally decided to take a course.

“I’m scared of structure — I liked to go and read by myself — but the decision I had made was that I wasn’t going back to prison and I had to put meaning to that.”

And that determination was put to the test on the day of his release. It was to be another test he would pass.

“One of my friends picked me up and by-the-time we got back to London, I would probably have smoked a spliff and been diverted from where I was going and that would have been an easy option,” explains Harris.

“Fortunately what really had an effect was the FTC and so I didn’t do that.”

He adds that FTC spent time with those about to be released and he also had the option of going back to them for help after he was freed.

“It was a continuation from prison which solidified a way of life for me,” says Harris.

“It gave me appointments to go to and college and that link was vital.”

Nevertheless, with his GCSEs secured and enjoying life as a free man, he completed courses in preparation for higher education and counselling certificates level one and two, funded by the Prisoners Education Trust. He even won an Adult Week Learner award for outstanding learner of the year in 2009.

“The courses I’ve done are a rebuttal to my past and to those who didn’t give me a chance earlier,” explains Harris.

“It’s also a rebuttal to myself — ‘Why didn’t you fix up earlier, Frank? Look what you can do’.”

And he says because of what education did for him, he decided to work with offenders.

“Within the context of where I’m from, seeing lots of young black men being locked up and going through that revolving door, I wanted to send a message that you can have aspirations — not just through the criminal justice system,” says Harris, who grew up in a deprived London borough of Hackney.

“I try to say to young men that they shouldn’t just do education because I did. One cap doesn’t fit all.”

“Education inside isn’t just about trying to get a qualification to get a job, it’s about more than that — it’s about feeling self-worth and broadening your scope.”

And, by putting offending labels to one side, he says he focusses prisoners’ attention on finding their strengths.

“I try to let people see things within themselves, for themselves,” says Harris.

“I can also answer questions from my experience inside, if that might deter them, and I can advise them on help with drugs.”

But Harris’s own focus has gone beyond the prison walls. He wants to stop young men from even beginning down that road.

In 2009 he set up The School of High Achievers for West Indian boys in Islington, but the Saturday school, which included workshops such as drumming, closed with the loss of the venue. However, Harris says he is determined to start it again.

“I just want to continue to help stop young boys going to prison,” he says.

“If anyone’s listening, I just want to bring attention to the importance of educational facilities.”

“You can cut crime, but you also give children, fathers and mothers, and the community, an artist, a singer, a painter, a volunteer.”