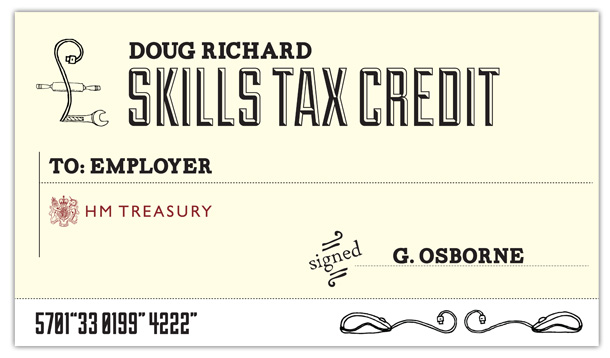 Business leaders and union bosses have united behind an “all-or-nothing” review of apprenticeships that has called for workplace tax breaks.

Doug Richard’s review of apprenticeships was published on November 27 with proposals for a revamp of the way courses were paid for at its “heart”.

The former Dragons’ Den investor said he wanted a closer relationship between employers and providers, and called for employers to pay providers directly for apprenticeship training. Tax credits, or other forms of government incentives, should then be dished out to employers as the government paid its part for training.

The Confederation of British Industry (CBI) and the University and College Union (UCU) welcomed the recommendation.

Businesses will welcome the idea of a skills tax credit”

Neil Carberry, the CBI’s director for employment and skills policy, said: “It’s rightly recognised that we need a simple, accessible funding system, and businesses will welcome the idea of a skills tax credit.”

Sally Hunt, UCU’s general secretary, said: “We have long called for stronger employer incentives to train and believe the proposal for government funding for apprenticeships to be routed through the National Insurance or tax system would get more employers on board.”

However, the Institute for Learning (IfL) and the Association of Colleges (AoC) were more cautious.

Toni Fazaeli, IfL chief executive, said: “Assessors have told us that cash incentives on offer, particularly for small businesses, are not effective, so we are interested in Mr Richard’s recommendation that incentives should be offered through the tax system instead.”

Teresa Frith, AoC skills policy manager, said that it was keen that colleges were brought closer to both apprentices and employers. “Our experience suggests that the stronger the direct relationships, the better the experience for all. However, there is little clarity on how this relationship will be managed or formed.

“We believe there may well be some significant challenges for all stakeholders when it comes to implementation, particularly when considering the proposed funding route.”

Lynne Sedgmore, executive director of the 157 Group, said that it supported the call for stronger employer involvement.

Mr Richard told FE Week that his proposals were not “a laundry list” from which the government could pick the elements that it wanted.

John Walker, national chair of the Federation of Small Businesses, said it was “particularly pleased” that the review identified the need for a clear definition of an apprenticeship. This would improve the brand image and give a clearer perception of what the apprentice and employer would get.

David Hughes, chief executive of the National Institute of Adult Continuing Education, also welcomed the report, but was critical of its “lack of emphasis” on the role that apprentices could play in shaping their curriculum.

Christine Blower, general secretary of the National Union of Teachers, said: “For too long apprenticeships have not been valued enough in society. Young people deserve the recognition that this route to employment is worthwhile and just as credible as gaining a degree from a university.”