The cladding at a college’s halls of residence for students under the age of 18, the type used on the Grenfell Tower, failed a safety test several months ago.

But speaking to FE Week the chair of governors “can’t remember” and a spokesperson “declined to comment” on whether the board or resident students were ever told.

Highbury College, in Portsmouth, has applied to the Education and Skills Funding Agency (ESFA) for up to £5 million to replace “non-compliant” panelling, which according to the architects “failed” a safety test.

The top five floors of the 10 story tower contain 75 bedrooms, according to the college website (see below), and “students aged under 18 years of age are accommodated within the on-site Tower Hall of Residence.” at a cost of £120 per week.

The college application form also states: “All accommodation for students aged under 18 meets the requirements of the Ofsted Social Care Common Inspection Framework”

However, a spokesperson for Ofsted told FE Week: “Ofsted is not the registration authority for further education residential provision – this falls to the Department for Education (DfE). Colleges providing residential provision for under-18s should inform the ESFA. This college isn’t currently listed in DfE/ESFA data, which we rely on to inspect. We are seeking clarification about the situation from DfE/ESFA.” 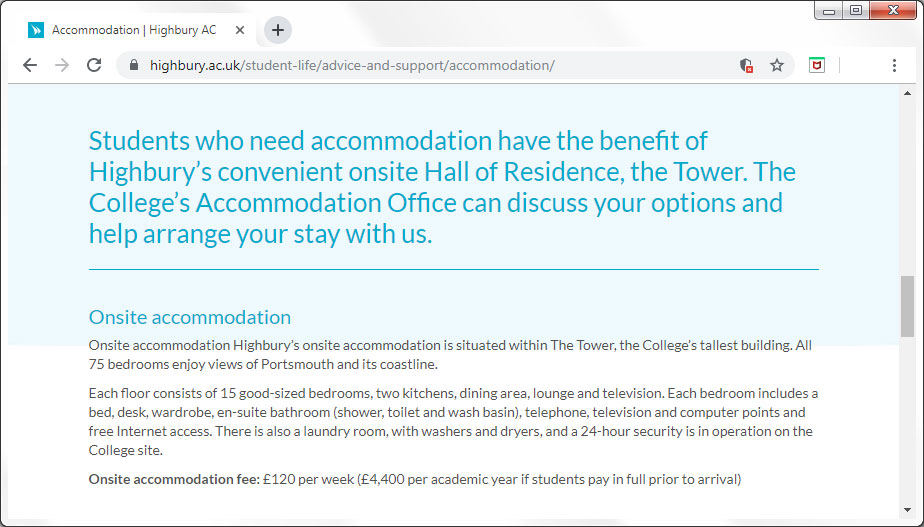 The college declined to comment on how many students currently occupy the 75 bedrooms, but confidential board minutes seen by FE Week suggests a significant decline in international students this year.

The group finance director told the college board of governors in March 2019 that income had dipped because fewer international students were coming to the college after the Home Office suspended their Tier 4 Sponsor licence after the college was awarded an Ofsted inspection grade three in June 2018.

The minutes also make it clear that the group finance director told the board he was confident the multi-million-pound re-cladding project would be “100% funded by the ESFA”.

ECD Architects, employed by the college to develop the project, said: “The Tower which is part of Portsmouth Highbury College is a 10-storey block consisting of education facilities and student accommodation. The Tower was constructed in the early 1970’s and was re-clad in 2001 by another Architecture practice, but recently underwent the BRE Cladding Screening Test and failed.”

And “The existing ACM rainscreen cladding is being removed and will be replaced with a new cladding system.”

ACM, or aluminium composite material, is the same cladding material at the heart of the ongoing investigation into the cause of the rapid spread of fire at the Grenfell Tower in June 2017.

Following the Grenfell Tower tragedy and loss of 72 lives, the ministry of housing communities and local government (MHCLG) began a programme of fire safety testing samples of panels at the BRE laboratory facilities in Watford.

FE Week asked the college and the DfE, as well as the MHCLG and BRE laboratory, but was unable to ascertain when the testing on the Highbury College cladding took place.

Portsmouth City Council gave planning consent for the new cladding and windows last month according to their website, but the DfE would not comment on the scale of the funding application nor the likelihood of it being granted.

A DfE spokesperson did tell FE Week: “The college has made an application to the ESFA for funding for their re-cladding project. The Department for Education will announce the outcome of this application in due course.”

When pressed, the college declined to comment specifically on whether or when the board of governors or student residents had been told about the failed safety test or why the group finance director was so sure the ESFA would pay all the costs.

However, a Highbury College spokesperson did say: “The safety and wellbeing of our students and staff is of upmost importance and we continue to fully engage with the government-wide work, including all relevant agencies, to ensure all of our buildings are safe including the ongoing project to replace the cladding.  The project has recently received full planning permission and an appointment of a contractor is expected in December with a start on site soon after.  The works are expected to take 12 months.

“We communicate fully with our students and residence and will continue to do so in the future.”