A trailblazer group chair has warned that its “years of hard work” in developing two apprenticeships standards could be undone, after they were included in the Institute for Apprenticeships’ second funding band review.

The level two supply chain warehouse operative and large goods vehicle driver standards were among 30 standards named on the list announced by the IfA on Tuesday.

Both were approved for delivery in 2016 and have had just over 3,000 starts between them.

“It has taken years of hard work to get employers to see the benefits of these standards and just as we start to get decent numbers they review the funding,” said Colin Snape, deputy director of policy at the Road Haulage Association.

He told FE Week the group had already been through a review for the LGV standard as they had requested the funding band – currently set at £5,000 – to be increased, but this was rejected.

“So why it is up for review is beyond me,” he said.

“With my experiences of the IfA and Education and Skills Funding Agency I do not believe we will come out of this review in a good way,” he added.

Between them the 30 standards in the second funding band review were responsible for 42,675 starts in 2017/18 – or 26 per cent of the overall number of starts on standards for the year, according to provisional statistics published by the Department for Education. 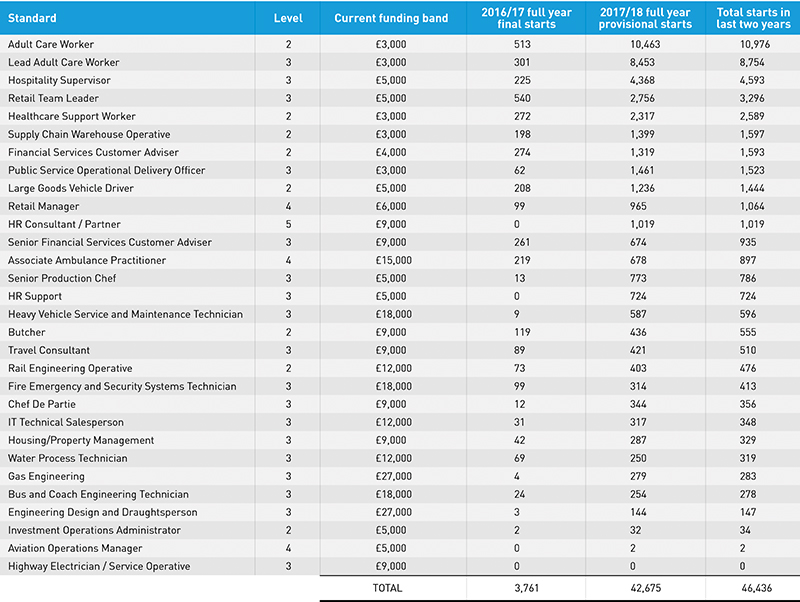 Both are currently set at £3,000. FE Week asked the trailblazer group if it expected this rate to be reduced, and if it was concerned this would hit take-up as a result, but did not get a response.

A spokesperson for the IfA said the reviews will “ensure value for money for employers and taxpayers, and consistency in the way older and newer standards are funded”.

It comes as the outcomes for all 31 standards in the first wave of funding band reviews, announced in May, were revealed by the IfA.

The second batch of standards includes two currently set at £27,000, meaning there is a high chance the rate will be cut as this is the highest possible rate.

Of the seven standards with the same funding band in the first review, five had their rates reduced, one is still to be confirmed and only one stayed the same.

FE Week has approached the trailblazer leads for both the level three gas engineering standard and the level three engineering design and draughtsperson standard to ask if they were concerned that their funding will be slashed, but neither responded ahead of publication.

Terry Fennell, chief executive of FDQ and chair of the butchery trailblazer group, said he “wasn’t surprised” the level two standard had been included, given its £9,000 price tag and more than 500 starts so far.

The apprenticeship has “thus far attracted an even balance of non-levy and levy employers and we think there will be good evidence to back up costs of delivery, EPA and apprentice durations,” he said.

“I am confident the funding panels will take on board the evidence available in order to reach the right decision,” he said.

The latest funding band review comes at a time when the IfA is warning of imminent apprenticeship overspend (see page 5).

Rate reviews got underway after the institute moved to having 30 funding bands – which represent the maximum rate paid for from the levy – to choose from, up from the previous 15.