Ofsted missed its inspection target for FE providers by 11 per cent this year – the biggest miss out of all education sectors.

The education watchdog’s corporate annual reports and accounts for 2018/19, published today, shows that it had aimed to carry out 323 inspections in further education but ended up conducting 287.

This is in stark contrast to Ofsted’s performance in 2017/18, when it carried out 485 FE inspections, which was 101 per cent of its target.

The new accounts state that providers “opening, merging or closing subsequently can change the number [of inspections] delivered and internal targets are not adjusted for these changes”.

When asked to explain this further, a spokesperson for Ofsted said: “Targets are not set for demand-led activity and we reprioritised resources away from low-risk inspections to complete more demand-led monitoring visits to new apprenticeship providers.” 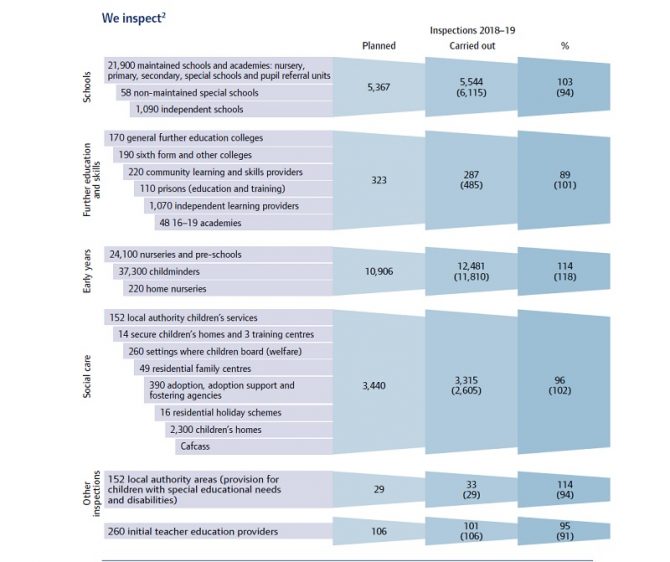 The watchdog’s falling budget might go some way to explaining its inspection target miss for FE.

Perhaps owing to the falling budget, chief inspector Amanda Spielman did not receive a bonus for the second year in a row.

The largest bonus payments went to chief operating officer Matthew Coffey and Ofsted’s national director for education Sean Harford, who both received between £15,000 and £20,000 each on top of their salaries.

Ofsted has previously come under fire for handing out bonuses – as it has regularly pointed out its funding has been slashed by 30 per cent since 2010. But the watchdog underspent by £1.7 million against its core funding of £130.3 million this year.