Apprenticeship starts were down 31 per cent in January on the same period in 2017, the latest provisional government statistics have revealed.

The news comes just days after the chancellor Philip Hammond admitted to Parliament that he had expected the apprenticeship levy would usher in a fall in starts – but not quite to this extent.

There were 25,400 starts in the first month of 2018 – down 11,300 from January 2017’s provisional total of 36,700, according to the Education and Skills Funding Agency’s monthly apprenticeship statistics update, published April 19.

The latest figures represent a bigger proportionate drop than in December, which saw a 23-per-cent year-on-year fall in starts.

“I recognise that starts are down—we always expected that,” he said during Treasury questions on April 17.

“There are fewer starts than we expected, but we are seeing a much higher level of apprenticeship. The Department for Education and the Treasury are looking carefully at how this is working.”

David Hughes, boss of the Association of Colleges, wants the government to “engage with colleges and employers to work out how to stimulate growth where it has fallen”.

This might include more outreach and “developing provision to encourage reluctant employers to engage in the system”.

“Where standards are not ready yet, frameworks should be fully-funded and there should be more support for pre-apprenticeship training to help people get ready for their apprenticeship,” he said.

Mark Dawe, Mr Hughes’ counterpart at the Association of the Employment and Learning Providers, warned that the government is “creating social immobility” through the apprenticeship system.

“The government said at the end of last year that its funding priorities lay with levy-payers, and this has been borne out by the fact that nearly half all starts can now be found in large employers and this proportion continues to grow,” he said.

“Given many levy-payers across the country are concentrating on higher level starts, it’s no wonder that we’ve seen a massive collapse in level two starts and starts for 16- to 18-year-olds.”

Apprenticeship figures from August 2017 onwards remain provisional, and the DfE stresses that they are subject to change; starts for recent months have generally been revised up since they were first published.

Meanwhile, 11 per cent of starts so far this year have been at level four or above, an increase of four points on last year’s final share of seven per cent.

Last month the skills minister admitted that fears over a “middle-class grab” on apprenticeships are valid, given that the “one area where starts have gone up is at degree level”.

“I feel quite strongly that an apprenticeship can offer social mobility, so I sit and wait and watch,” Anne Milton told a House of Lords committee hearing on March 13.

In response to the latest statistics, a DfE spokesperson said its reforms were “about increasing the number of quality apprenticeships, so people of all ages and backgrounds can take advantage of the opportunities apprenticeships bring”.

“We have recently seen an increase in the number of people starting on higher level apprenticeships”, which had been “designed by employers themselves to meet their needs,” she continued. 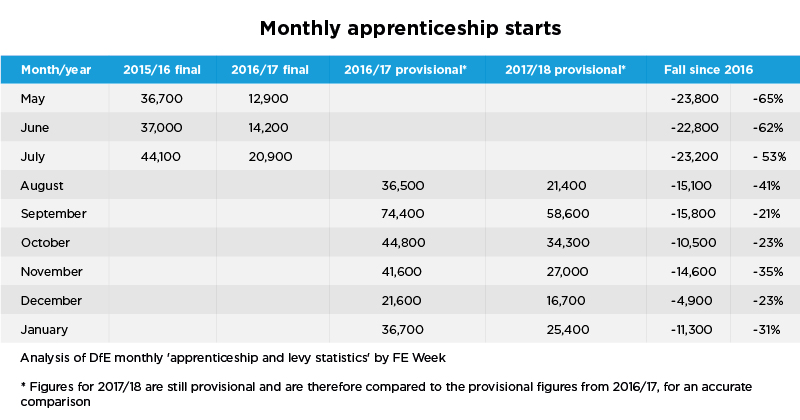