The process of closing the old-style apprenticeship frameworks to new starts began in March 2016, but only those with few or no starts have so far been affected.

That’s about to change, as two of the most popular frameworks – health and social care, and hospitality – are due to be withdrawn at the end of December. FE Week found out whether providers are ready.

The most popular apprenticeship framework in 2016/17, responsible for around 17 per cent of all starts, is about to be switched off.

Even though the level two and three health and social care framework clocks up 86,500 starts last year, Skills for Care and Development announced in April that it would be closed from December 29.

Replacement standards are available, but starts are low.

So what will happen when the framework is switched off? And is it a good thing it’s being closed?

Expense was a major issue that was raised by providers. 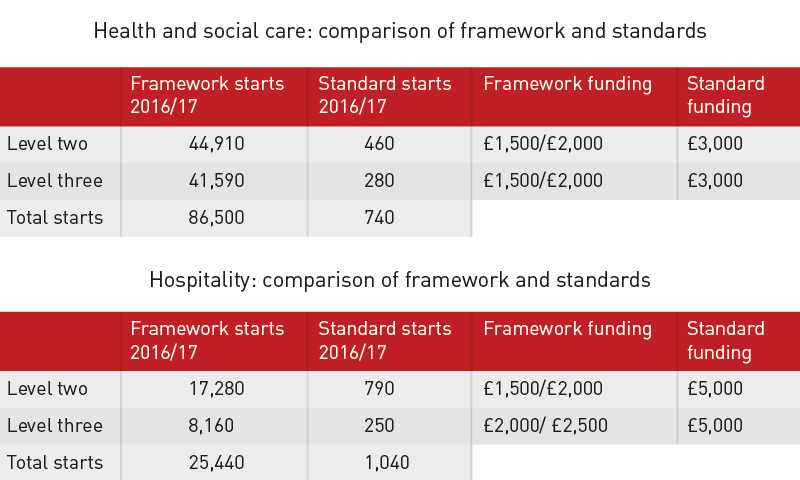 A spokesperson for MiddletonMurray said it hadn’t yet started to deliver the level two adult care worker or level three lead adult care worker standards that replace the health and social care framework, citing cost as a major barrier.

But, she said, this is “economically unviable for training providers” when factoring in “the costs of qualification registrations and claims, delivery hours, resources, functional skills delivery and examinations, and the end-point assessment” together with the longer duration of the standards than the frameworks.

With the standards you don’t make any more money

However other providers, including Barnsley College and Sheffield College, have already switched over either entirely or in part to standards, a decision they said was led by employer demand.

One provider which did not want to be named said it would have been “impossible” to deliver the minimum government requirement for 20-per-cent off-the-job training on the funding available for the frameworks.

“With the standards you don’t make any more money, but it enables us to deliver that requirement,” they admitted.

The off-the-job training requirement became mandatory for all apprentices this May, as one of a number of changes introduced alongside the levy, including an employer contribution from non-levy paying employers.

These changes have hit the health and social care apprenticeship market hard, a number of providers said.

Care homes are “a predominantly small- and medium-sized enterprises market”, the anonymous provider said, and many “aren’t prepared to pay the 10 per cent”.

For those that are willing to pay, “some providers have stayed on frameworks purely to keep that 10-per-cent contribution lower, but I don’t know how they financially deliver the 20-per-cent off-the-job delivery model”.

Richard Goodwin, the managing director at the JGA Group, said starts across both frameworks and standards had been “flat as a pancake” since May.

“I think it’s all migrating over to loan-funded learning, because what they really want is the diplomas for professional reasons,” he said.

However, not all providers are so pessimistic about the future for health and social care standards.

Julie Carrigan, the curriculum and quality manager at Acacia Training, said she was “excited” about the switchover.

With the new standards, “the assessors are going out and focusing on key areas, it’s allowing them to look above what the standards are asking”.

“It gives them some more time with the learner to focus on what’s important,” she said.

“Both of these frameworks are being withdrawn by the issuing authorities, a strong indication of the sector’s desire for the standard to be taken-up,” said a Department for Education spokesperson.

“We have been actively encouraging employers and the authorities in question to work with us when moving across to the new, high-quality standards.”

Skill for Care and Development declined to comment on the withdrawal of its frameworks.

Poised to deliver with hospitality 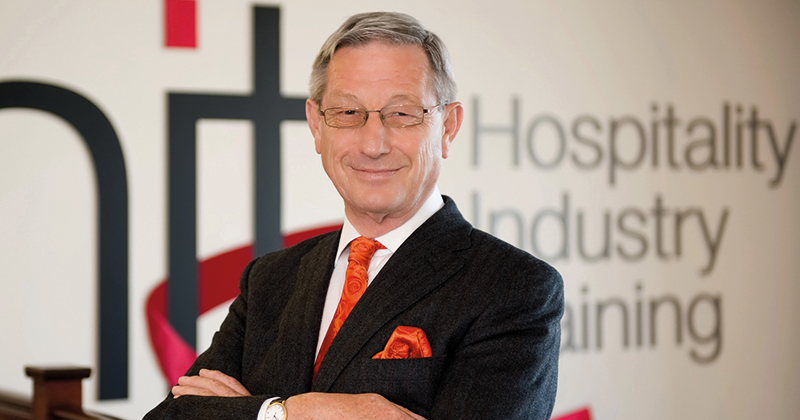 John Hyde (pictured above), chairman of HIT Training, was positive about the changeover to standards – a move he said HIT had started over a year ago.

“We’ve not had a single complaint from the employers – they love them,” he said.

But, he conceded “they are a lot harder work to deliver”.

How can you deliver a quality programme at that price?

The hospitality framework was funded to the tune of £1,500 to £2,500, depending on the level and pathway, which Mr Hyde said was “peanuts”.

“How can you deliver a quality programme at that price?” he asked.

The replacement hospitality team member and hospitality supervisor standards each have a cap of £5,000.

“In all honesty you’re not going to make an easy buck – you have to do twice as much work,” he insisted.

Not all providers are quite as ready to deliver the standards as HIT, however.

Mr Hyde, who chairs the AELP hospitality group, said he had been “quite worried” at the group’s last meeting a few months ago, as it was “very apparent” that a number of small providers hadn’t looked at the standards.

Annette Allmark, director of strategic policy at People 1st, said the decision to withdraw the frameworks had been taken following a “thorough consultation” involving employers and training providers.

“The majority of feedback, particularly from employers, was to withdraw the frameworks as soon as possible in order to focus on the new apprenticeship standards,” she said.