Sector leaders have hit out at the “ridiculous variability” in approved external quality assurance charges, ranging from a free service to a whopping £179 per apprentice.

The EQA bodies are allowed to apply a charge as long as it is on a “cost-recovery basis” – the amount of which is taken directly from the government funding given to training providers to deliver the apprenticeship.

When shown the FE Week analysis of costs published by the Institute for Apprenticeships and Technical Education, Graham Hasting-Evans (pictured), group managing director of NOCN, an end-point assessment organisation, said he was “very concerned” about the high level of EQA charges, which are “up to 10 per cent of the EPA cost in some cases” as well as the “considerable inconsistency”.

“This will just add another unnecessary administration cost circulating money around the system for no real benefit,” he told FE Week.

Tom Bewick, chief executive of the Federation of Awarding Bodies, representing many of the 199 currently approved EPAOs, said in the absence of a “single quality assurance framework for apprenticeship, including proper regulation of the charging rates of EQA providers”, it is “no wonder we have ended up with such ridiculous variability”.

“These practices run the risk of bringing the entire reforms into disrepute,” he added.

“Training providers are not charged by Ofsted for inspection visits so it is nonsensical for EPAOs to be charged for a check of their activities.”

Mr Bewick suggested the “sensible thing to do” would be for IfATE to “see quality assurance as a national infrastructure cost, by top-slicing the levy to fund it, and therefore offering EQA consistently free at the point of delivery for all standards”.

A spokesperson for the IfATE said external quality assurance needs to “respond to the specific nature of the apprenticeship standards involved”.

“Therefore, what constitutes cost recovery will vary for different EQA providers depending on a variety of factors such as the mix of standards they work on, volumes on those standards and the cost of expertise in the sector,” he added.

“We will keep these charges under review going forward.” 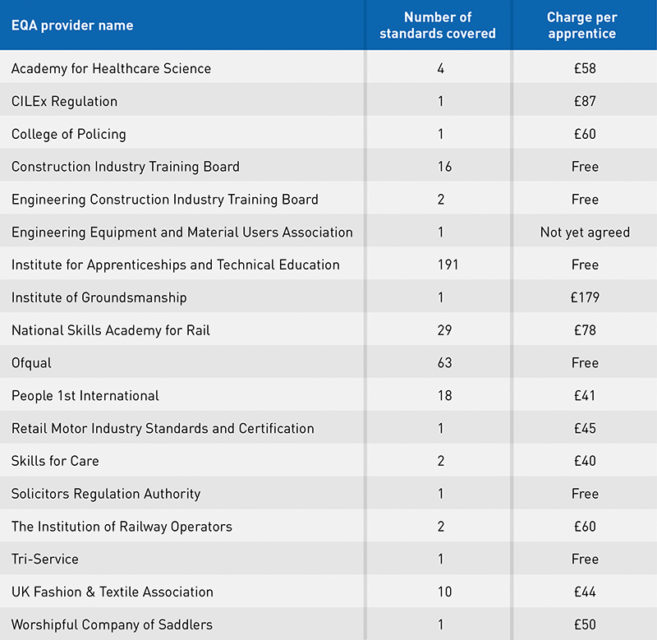 The EQA provider that charges the most is the Institute of Groundsmanship, at a cost of £179 per apprentice.

A “letter of recognition” on the IfATE’s website recognises that this is a “relatively high amount but reflects the anticipated low volume of apprentices”.

“Therefore, if volumes do increase we would expect costs to decrease,” it adds.

Tim Gray, the director of membership and business development at the Institute of Groundsmanship, said his company is not for profit and provides the EQA for the level two sports turf operatives standard “purely on a cost-recovery basis”.

Lantra, an awarding organisation that delivers the EPA for the sports and turf operatives standard, which has a funding band of £5,000, will charge £1,000 per apprentice for its service.

Marcus Potter, Lantra’s chief executive, told FE Week his organisation does “face some challenges in delivering the assessment within the available funding – this is partly because of the additional EQA cost”.

The second highest charge from an EQA provider is CILEx Regulation, which charges £87 per apprentice it monitors on the level six chartered legal executives standard.

Vicky Purtill, director of authorisation and supervision at CILEx Regulation, said: “We are not publicly funded and the cost of acting as EQA is therefore the minimum necessary to cover administrative costs. As the number of apprentices increases, costs should reduce proportionately.”

The Institution of Railway Operators contested the £60 per apprentice charge stated in its letter of recognition.

The institution added that it “can’t imagine getting to the equivalent of £60 per head”.