The government has been left red-faced after FE Week found thousands of apprentices with no organisation responsible for checking the quality of delivery of their training.

The apprenticeship accountability statement, published by the Department for Education, says responsibility for oversight of level six and seven programmes does not lie with Ofsted but with the Office for Students.

But the OfS has claimed their remit only extends to those with a prescribed HE qualification, such as a degree.

FE Week analysis shows there are currently 15 approved standards at level six and seven with no degree element, which have had a combined total of 4,443 starts on them since 2016/17.

One of the standards, the level seven accountancy and taxation professional, had over 3,500 starts in 2017/18 alone.

Adrian Anderson, the chief executive of the University Vocational Awards Council, said this was a “real issue” which the DfE needs to fix “immediately”.

“Something needs to be done and it needs to be done very quickly so we ensure we have certainty in terms of regulation and inspection of apprenticeships delivered at all levels by all providers,” he told FE Week.

“I think the solution to that lies with looking at how the OfS extends its remits to look at regulation of delivery there as well.” 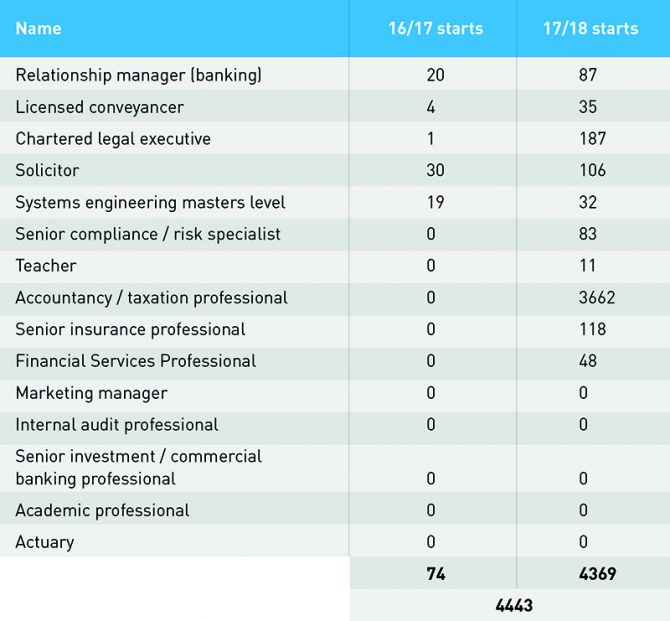 Mark Dawe, the boss of the Association of Employment and Learning Providers, was shocked by the situation, but said it should be Ofsted that oversees this provision.

“This appalling situation illustrates the current lack of clarity on accountability in the system which the Commons select committee referred to and why Ofsted should be given overall responsibility for inspecting all apprenticeships,” he told FE Week.

Any higher-education provider that is delivering apprenticeships that do not have a degree element is still subject to OfS regulation, so some of these starts would have had some monitoring.

Nick Hillman, the director of the Higher Education Policy Institute and a former adviser to HE minister David Willetts, said answers are needed “as to why these qualifications are being allowed to fall through the cracks”.

“I am sure it is a cock-up rather than intentional, but it could be unfair to the students involved and reflects the complexity of the new arrangements,” he added.

Despite the severity of the situation, the DfE, which FE Week understands has been aware of the issue for years, failed to provide comment.

Confusion over the regulation of higher standards has engulfed the skills sector for years since the introduction of degree apprenticeships.

In April 2017 the DfE ruled that these would be regulated by the Higher Education Funding Council for England – now the Office for Students – and not by Ofsted.

I am sure it is a cock-up rather than intentional, but it could be unfair to the students involved

However, it was decided in August that Ofsted will inspect all apprenticeships at levels two to five, even if the advanced standards contain a prescribed HE qualification, following the outcome of a pilot conducted with the OfS earlier this year (see box out).

Ofsted told FE Week it has absolutely no power to inspect level six and seven standards.

Explaining its approach to regulation of these higher apprenticeships, an OfS spokesperson said: “The Office for Students employs a risk-based approach to quality assurance defined by a high-quality threshold for entry and regulates all provision at all providers on the OfS Register.

“To externally assure the quality of specific courses, the system of external examiners provides course-level independent and impartial external verification that expectations and standards are met,” a spokesperson said.

“These will apply to all degree apprenticeships. Courses will be externally verified as part of the approval process and will be subject to external scrutiny throughout each stage of delivery.”

She added that FE Week should contact the DfE as they are currently reviewing the “apprenticeship accountability statement”, which should be published by December, to “take into account changes in the apprenticeship landscape including the role of OfS”. The DfE did not respond to FE Week’s enquiries.

The Institute for Apprenticeships runs a Quality Alliance Stakeholder Reference group but refused to comment on the level six and seven apprenticeships grey area, claiming it isn’t directly responsible for it.

Universities in uproar about being inspected by Ofsted

Universities have warned they could be “driven out” of the apprenticeships market after it was decided that Ofsted will inspect HE providers delivering level four and five standards, even if they contain a degree element.

After the government ruled that degree apprenticeships would be overseen solely by the OfS in early 2017, a pilot was conducted by the education watchdogs to find the best solution for monitoring those advanced standards with HE qualifications.

A letter, sent to universities in August and seen by FE Week, reveals that Ofsted will have the power to inspect HE providers, with the assistance of the OfS, from 2018/19.

“OfS will provide relevant data and information to Ofsted to inform its risk-assessment process and planning of inspections of HEIs which have L4/5 apprenticeship provision with standards that contain a recognised HE award,” the letter said.

But the decision hasn’t been welcomed by University Vocational Awards Council, which represents 82 universities.

“It is a duplication of regulation and a waste of public resources,” said Adrian Anderson, chief executive of the UVAC.

“All provision delivered by an institution on the OfS register is subject to OfS regulation. Ofsted is inspecting provision regulated by another government regulator.

“UVAC would like to know the justification for Ofsted inspection and why inspection represents an appropriate use of public resources, especially at a time when Ofsted has requested and received additional resources from DfE.”

He added that the decision will “drive providers out of the market and reduce the availability of provision for employers and learners”.

But Mark Dawe, chief executive of the Association of Employment and Learning Providers, argued for the opposing view.

“AELP has always believed that for the sake of clarity and consistency, Ofsted should be responsible for inspecting apprenticeships at all levels because it can form the best judgement on inspecting the on-the-job training which is a core part of the apprenticeship,” he said.

“Where there is an actual degree qualification involved we are happy for OfS to contribute but it should be to an overall Ofsted judgment.”

Ofsted has already started to conduct early-monitoring visits of HE providers delivering apprenticeships.

The most high-profile case was at BPP University, which was deemed to be making ‘insufficient progress’ for its apprenticeships at level two to five.

There is, however, confusion as to whether the HEI will be banned from recruiting all apprentices, which is the sanction for FE providers with the rating, as it also delivers level six and seven apprenticeships which are under regulation by the OfS.