The Centres for Excellence in Maths are headed into their fourth year. With just two years of funding left, FE Week looks at how it all adds up

“I’ve been in the sector 20 years, and this is the first big initiative on maths I’ve seen with FE in the title,” says Zia Rahman, head of maths at Newham College in London. His colleague, Liz Hopker, nods. “Prior to this project, there hadn’t really been that much about maths in FE – mastery had been mainly about schools.”

The initiative they’re talking about, the Centres for Excellence in Maths (CfEM), was launched by the Department for Education in 2018. Schools already had ‘maths hubs’, maths mastery was a big topic, and there were even paid trips to Shanghai. But specific initiatives for post-16 maths seemed to have been forgotten.

It was not for a lack of trying over the preceding two decades. Various attempts had been made to shift stubbornly low pass rates in maths GCSE, improve adult numeracy and create more vocationally focused qualifications, explains Andrew Davies. He’s vice chair of the National Association for Numeracy and Mathematics in Colleges, which he says was set up precisely because there was so little cross-sector collaboration on maths in FE.

“There’s been an awful lot of efforts on maths that have been very well meaning,” he begins. “The chief flagship policy in recent years has been the centres, which has given the opportunity to share good practice.” 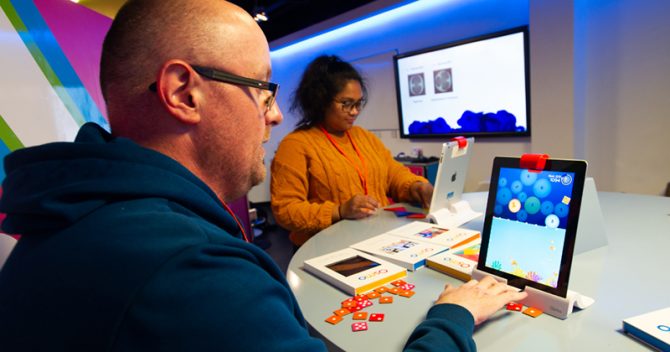 Prior to that, there was the 1999 Moser report, which sounded the alarm on the state of numeracy among adults. Then there was the 2004 Inquiry into Post-14 Mathematics Education, which warned of huge teacher shortages and issues with the curriculum and CPD. It prompted a well-regarded resource package by the University of Nottingham called Standards Unit – but then again all went quiet.

Then came the “gamechanger” recommendation in the Wolf review in 2011, says Davies. The report warned that less than half of students aged 18 held both maths and English GCSE passes. Worse, only four per cent were achieving them during the 16-18 phase. By 2014, it was a condition of college funding for students without a grade 4 to enrol in maths and English.

But the problems rolled on. Both the Sainsbury review of technical education in 2016 and the Industrial Strategy in 2017 warned of the need to improve maths study. A review of post-16 maths by professor Sir Adrian Smith said the country must “recognise more explicitly…the fundamental importance of further education”.

Various initiatives followed, including Maths for Life, which espouses “dialogic teaching” (encouraging students to discuss). At the same time a level 3 “core maths” qualification arrived in 2014, GCSE maths was reformed in 2015, and functional skills maths was also reformed in 2019.

Despite all these efforts, data shows less than a quarter of students who arrive without a GCSE grade 4 in maths aged 16 will have achieved this two years later.

So three years ago the government announced £40 million to be shared between 21 colleges, which would act as Centres for Excellence in Maths, working with up to ten partner colleges. The Education and Training Foundation and the University of Nottingham got a slice of the funding to support the project.

It wasn’t entirely without controversy – as FE Week pointed out at the time, six of the 21 centres actually had below average GCSE resit pass rates. FE Week analysis can also reveal the latest Ofsted reports for seven centres actually highlight concerns around maths attainment. Meanwhile, the colleges with the very best GCSE maths pass rates, such as Dudley College, had not become centres at all.

Perhaps this explains why the CfEM focus is on research. While the equivalent Centres for Excellence in SEND (also overseen by the ETF) disseminate their proven good practice, the maths centres were handed a fact-finding mission.

This is two-fold: first, ‘action research projects’ led by staff, and second, national trials on mastery led by Nottingham University. Findings from the latter have been stalled by Covid, and will now come out at the project’s finish in 2023.

These are centres for excellence, not of excellence. No one would claim to have all the answers

“It evolved into being research focused,” explains Steve Pardoe, head of the CfEMs at the ETF. “These are centres for excellence, not of excellence. No one would claim to have all the answers. The action research, for instance, has been hugely popular.”

The colleges agree. Running their own research has allowed staff to address one of the first problems facing the sector, explains Hopker ̶ the lack of academic evidence in an FE setting. “We did literature reviews, which did show there was very little on maths in FE,” she says. “Just since doing the action research, there’s now already so much more available.”

The centres pitch the projects to the ETF who help refine research questions and methods. Colleges must investigate four areas: motivation and engagement of learners, use of mastery, use of data and technology, and use of contextualisation (in which maths is placed in an applied context). In 2018/19, up to £170,000 was available per centre, and this year, it was up to £210,000.

At Fareham College in Hampshire, staff decided to research motivation by training learning support assistants to become one-to-one maths coaches, providing an extra hour of learning a week. “We did a lot of work around growth mindsets,” says Rosie Sharp, centre lead. “It’s about recognising that the students have already done the GCSE once and failed, so more of the same isn’t going to work.”

A major issue facing the centre project is that hard attainment data over the past two years has been impossible to get, owing to cancelled exams.

So Sharp’s team surveyed the students using questionnaires. Before coaching, 32 per cent reported feeling positive about maths; afterwards, 65 per cent did, she says. Meanwhile attendance at maths lessons has gone from 76 per cent to 82 per cent. The centre has now trained 11 coaches across it six ‘partner’ colleges.

Motivation and ‘contextualisation’ was the focus at City College Plymouth. The college decided to interpret the idea of a “centre” literally, using funding to create a more inspiring physical space kitted out with re-purposed tablets, says Nadia McCusker, centre lead.

Meanwhile other lessons were held in unusual locations, including orienteering sessions in woodland, or using ratios to mix dyes in hair and beauty workshops. “By taking them out of the traditional environment, we were able to engage them with maths more than usual.”

Some of these changes have been inspired by “maths mastery”, which is explained in an FE-specific handbook compiled by the ETF and Pearson. Geoffrey Wake, professor at the University of Nottingham, and director of the centre trials, explains. “Slow down, first of all. It’s about working out where the student’s understanding is, and building it up, block by block, from there. It’s giving students the time to think through the concepts. Not rushing through the curriculum.”

This is key for FE maths teachers, who can feel they must squeeze a two-year GCSE course into about 30 weeks, he says. “We’re saying, do the fundamentals.”

Debra Jory, maths manager at City College Plymouth, says the centre team changed its maths scheme of work to reflect this. “Instead of teaching all the GCSE again, we went back to the basics. That’s also been motivational for students.”

At Leicester College, ‘network’ meetings between centres and their partner colleges have allowed such approaches to spread, says Michelle Bilby, centre lead. Students now use HegartyMaths, an online resource, to learn the basics themselves. This has also allowed the college to halve class sizes, which has improved learning in more complex topics, she adds.

Meanwhile at Leeds City College, the college used centre funding to buy £1,000 annual licences for maths software for its college partners after trialling the software itself. It focuses, mastery-style, on teaching maths in “personalised building blocks”, says Jonny Diamond, head of English and maths.

Another approach to maths mastery “with an FE lens”, spearheaded by Emma Bell, centre lead at the Grimsby Institute, has even been shortlisted for a national award.

But with full attainment data lacking, for now the biggest claim to success is probably the CPD opportunities.

“Anything that can allow teachers to collaborate and improve in this area is very welcome,” says Julia Smith, a spokesperson for the Mathematical Association. “It can be a very tricky arena to work in. This has raised the profile of post-16 mathematics.” Diamond puts it more succinctly. “When maths teachers from Leeds are emailing maths teachers from Shipley, that’s great. They’re happier when they work.”

But big issues remain, which the centres – currently working across 172 colleges – do not directly address. Teacher shortages is one, but several staff warn that the numeracy crisis among adult learners is being overlooked. Others say that similar Centres for Excellence are badly needed in English and digital skills.

However, the most unanimous call from staff and experts is for a closer look at the GCSE itself, and whether it is the right qualification for FE. The government has remained quiet, but Alison Wolf, author of the 2011 review, has stated she doesn’t think it should be “compulsory” to do GCSE English and maths. She is looking at alternative curriculums for 16-19 learners, she says.

The CfEMs are a start, building up a much-needed catalogue of ideas. Professor Wake reflects: “It’s a project, funded for five years. But we know that embedding what we’ve learned into the fabric of FE can be really difficult. So, what’s the legacy?”