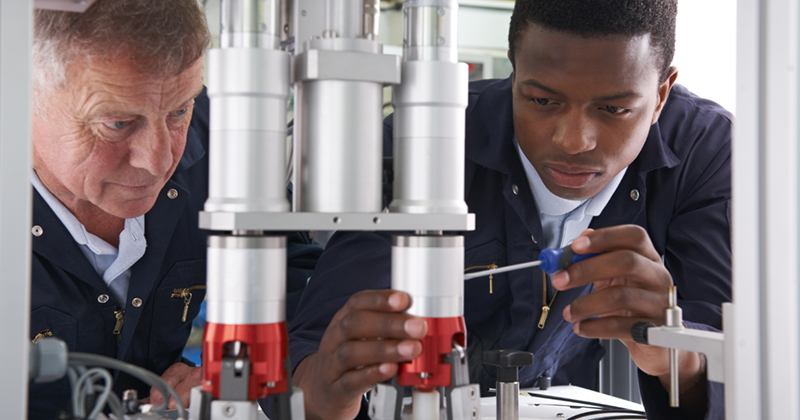 The Department for Education has today published its final review of its apprenticeship reform programme.

Officials established the programme, which has seen the launch of the levy and introduction of standards among other changes, in 2015 and was scheduled to be delivered by the end of the financial year 2020-21.

FE Week has pulled out the five main findings.

In the 2015 manifesto, the Conservative Party set an ambitious target of 3 million apprenticeship starts between 2015 and 2020. A target they kept in the 2017 manifesto.

The DfE’s report says that while the 3 million target was missed by 626,900 starts, over the same period apprenticeships have “become of longer duration and are now co-designed with employers” meaning that the starts now made on the programme are “into higher-quality training”.

The DfE set a target to increase the proportion of apprenticeships started by people of black, Asian and minority ethnic (BAME) backgrounds by 20 per cent by 2020. This would result in 12.1 per cent of starts being by apprentices of BAME backgrounds.

This was exceeded, reaching 13.3 per cent starts from people with BAME backgrounds by 2019/20, which is higher than the BAME employment rate of 11.7 per cent, according to today’s report.

The DfE also set a target to increase the proportion of apprenticeships started by those declaring a learning difficulty or disability (LDD). They aimed to increase LDD starts by 20 per cent, uplifting starts to 12.5 per cent.

3) ‘More to do’ on achievement rates

The achievement rate for apprenticeship standards sat at just 58.7 per cent in 2019/20.

Additionally, official government data published in March showed that just 60.2 per cent of apprentices training on new-style standards stayed on their programme until the end in 2019/20. This figure sat at 48.3 per cent the year before.

The principal measure the DfE uses for monitoring productivity impact is the Further Education Skills Index.

The Index estimates the aggregate value of the skills supplied by the FE system each year by aggregating earnings returns for all adult learners and apprentices who successfully complete their courses. 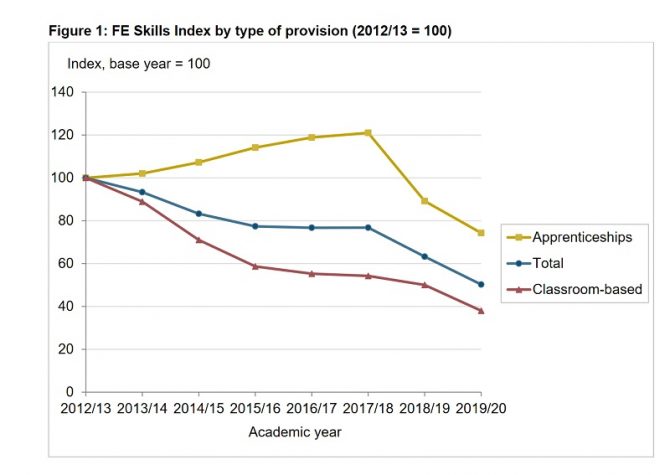 The DfE blames this recent decline on a “fall in participation, resulting in lower achievement volumes”. Activity in 2019/20 was also “impacted by Covid-19 restrictions, which led to an increase in breaks in learning and fewer achievements than expected”.

However, the average value-added of individual apprenticeships has increased each year, with each learner who completed an apprenticeship in 2019/20 generating 27 per cent more  value  than  in  2012/13.

This has been driven by a shift from Intermediate towards advanced and higher apprenticeships, and towards sector subject areas associated with higher returns (engineering, construction, and ICT), the report says.

Public sector bodies in England with 250 or more staff have had a duty to aim to employ an average of at least 2.3 per cent of staff as new apprentices over the period 2017 to 2021.

Between that period, public sector employment of apprentices sat at an average of 1.7 per cent.