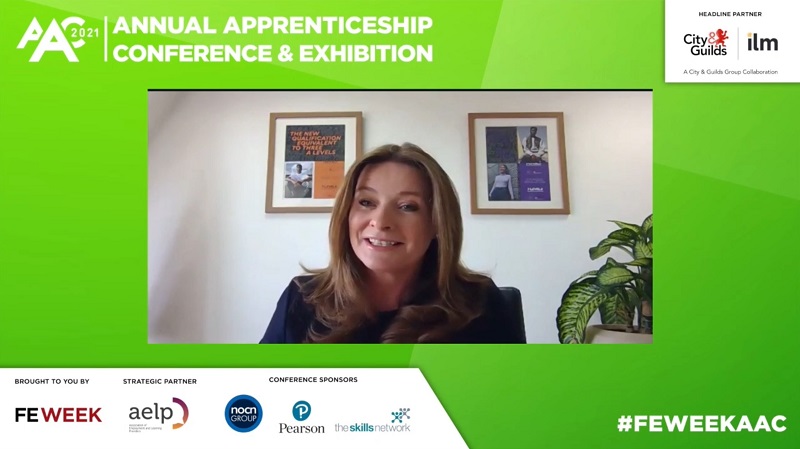 The skills minister has ordered an investigation into the “astonishingly” high drop-out rate for apprenticeship standards.

Official government data published in March showed that just 60.2 per cent of apprentices training on new-style standards stayed on their programme until the end in 2019/20. This figure sat at 48.3 per cent the year before.

The retention rate on the old-style frameworks has stayed consistent at 69 per cent.

Minister Gillian Keegan was quizzed on the numbers this morning by FE Week editor Nick Linford on the first day of the Annual Apprenticeship Conference, and revealed she has asked the Department for Education to “look into this” after being left “astonished”.

She pledged that she “won’t stop” until the completion rate is “much, much higher”.

Keegan said she “couldn’t understand” why this is happening as apprenticeships were seen as the “golden ticket” when she left school and the “last thing you would dream of is not finishing it”.

Keegan admitted there could be a variety of reasons for low retention, but early indications point part of the reason towards new apprenticeships being disjointed.

She explained that apprentices will often drop out if they achieve a qualification that proves their professional competency much before they are due to sit their end-point assessment, such as nursing.

Keegan described this as creating an “artificial end-point” that “needs to be more logically placed as part of the apprenticeship”.

She explained: “I have a suspicion that we need to make sure that all of the parts of the apprenticeship work intuitively.

“I have seen some examples where qualifications or certification may be separate from the end-point assessment by quite a long way. That doesn’t make much sense, so we need to make sure that the apprenticeship doesn’t have the end-point a long time after either the individual or business thinks they are at the qualification level.”

Keegan said this problem first came to light at the start of the pandemic when she was asked to sign off a group of nurses that hadn’t finished their end-point assessment but had completed their nursing and midwifery accreditation and wanted to be on the frontline.

“When I looked into it actually, they had completed their nursing and midwifery accreditation but the end-point assessment was a completely separate thing and came a long time afterwards,” she told delegates.

“I said that makes no sense and they should be together. You know, when is a nurse a nurse? The Nursing and Midwifery Council accreditation is the most logical point so I couldn’t understand.

“It is kind of like an artificial end-point and it needs to be more logically part of the apprenticeship.”

The issue that Keegan describes is already being acted upon by the Institute for Apprenticeships and Technical Education. In October 2020, the quango announced plans to “simplify and strengthen” apprenticeships that have a “statutory regulator” and an “established professional competency test”.

It would mean that in situations where an apprentice has met a statutory regulator’s requirements to practice, this will be counted as that apprentice’s end-point assessment in the future.

Currently, just 28 standards out of a possible 500 that are approved for delivery could be impacted, most of which are in the healthcare sector.

Watch the Minister’s address to the AAC