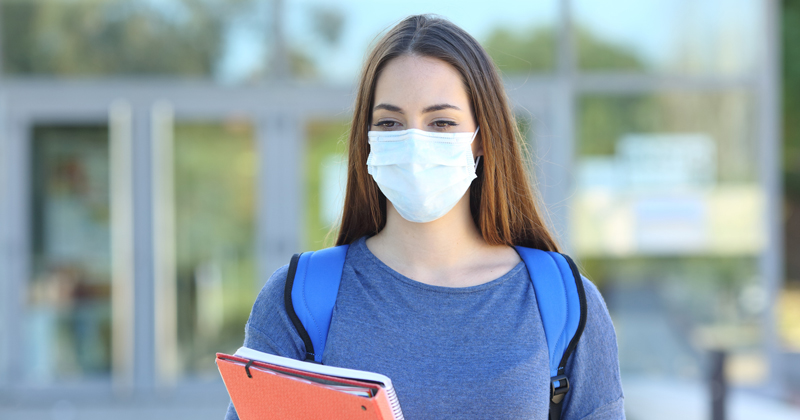 Students will no longer wear face masks in school and college from next week, Boris Johnson has confirmed.

The recommendation that masks be worn in classrooms and by learners in communal areas will be lifted from May 17.

However, the rule that staff and other adults wear face coverings in situations where social distancing is not possible, including corridors and communal areas, will remain in place.

The prime minister told a Downing Street briefing that from next Monday, the government “will no longer require face coverings in classrooms, or for students in communal areas in secondary schools and colleges”.

The Department for Education had already said it planned to remove the recommendation in line with step three of the government’s roadmap out of lockdown.

Today, the prime minister confirmed that the next phase of restrictions would be relaxed from Monday.

Education secretary Gavin Williamson tweeted shortly after to say the decision has been taken as “infection rates decrease and the vaccination roll-out covers most adults”.

Pupils will no longer be advised to wear face coverings in schools and colleges from 17 May, as infection rates decrease and the vaccination roll-out covers most adults.

All other protective measures such as ‘bubbles’, extra hygiene & social distancing will remain in place.

Masks have been recommended in classrooms since schools and colleges reopened more widely on March 8. The government initially said it would review the rule in the Easter holidays, but opted to continue to make the recommendation until May 17 at the earliest.

Earlier this month, unions and scientists called for the recommendation, which has been in place since schools reopened more widely in March, to be extended to June 21 at the earliest. They warned that not doing so would have “consequences” for the health of young people and parents.

But the DfE said last week that it planned to remove the rule “as infection rates continue to decline and our vaccination programme rolls out successfully”.