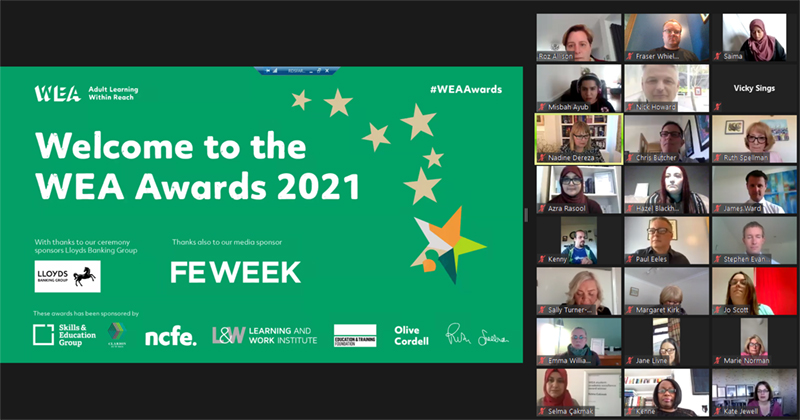 A teacher from Turkey who had to study her way back into an education career, and a Zoom champion are among the winners of this year’s WEA awards.

The six student and three tutor award winners, as well as two WEA fellowship recipients, were named at a virtual ceremony on Thursday, May 6.

“Our awards are a fantastic opportunity to celebrate our students’ achievements and the quality of teaching and support our tutors provide,” the WEA said.

Here are all the winners, together with the reasons they have been recognised in these prestigious awards.

After the WEA helped her to “come out of her shell”, Joanne has now founded her own charity, Everyday Enable, and is working with a number of other similar organisations.

Before starting classes, Scott said she “would have loved lockdown. I’d have hidden myself away and enjoyed not speaking to anyone. The WEA helped turn that around,” by making her realise that “other people faced the same situation and felt rubbish about themselves too. I wasn’t alone in this.

“To know that I have helped others come through the situation I faced is absolutely incredible.

“I’m surrounded now by people I trust. I sometimes feel like Dorothy skipping along the Yellow Brick Road – a completely different person.”

Selma previously worked as a maths teacher in Turkey before her “life was turned upside down” when she and her family “suddenly” moved to the UK.

“I entered a world I knew only through the movies. I’m a talkative person and I could speak to nobody. It was like being a baby again,” she said.

Not wanting to keep to the “balloon” of her community, she enrolled with the WEA and after passing several ESOL Level 1 courses, she was accepted as a volunteer classroom support assistant at a local school.

Selma said she was “determined” to work in mainstream education or to set up her own tuition centre, as: “The satisfaction of watching young students progress makes the pain of relocation fade away.”

The award “gives me amazing encouragement and motivation to follow my dreams.”

Margaret joined the WEA ten years ago after retiring and ended up as her local branch’s treasurer.

She “loved” the arts courses the WEA put on, but really came into her element when the pandemic hit.

“One of the lady members could read emails on her tablet, but nothing more. She was on her own and was determined to stay connected,” and so Margaret coached her through Zoom. Margaret calls the software “absolutely a lifeline, especially for people who live by themselves”.

When her branch started having Zoom coffee mornings, Margaret was asked to go through some tips for using Zoom with the other members.

“We’ve got a number of people who come from very successful careers, so they’re not used to feeling stupid. But that’s how technology can make you feel, through no fault of your own.”

The WEA has said “everyone” needs “Zoom champion” Margaret on their calls.

A self-proclaimed “gaming geek”, Kenny has developed new digital skills to inspire and engage others, the WEA said.

After the pandemic struck and lockdown was introduced, he started a gaming thread on a WEA Facebook page, discussing everything from old games to next-generation games.

He was introduced to WEA’s Reach Out scheme ten years ago and “enjoyed it from the very first day”.

One of the things the thread involved was a live demonstration of an Assassin’s Creed video game: “Folk watched me playing the game and I told them about the real-life history in London, where it’s based.”

The audience “loved it,” Kenny said.

Rehana has gone from being unable to catch a bus due to her lack of English, to travelling alone to Pakistan. She came to the UK 25 years ago with “no English at all” and could not work out how to use buses until a class trip taught her how to do so.

But within a couple of years of joining the WEA, Rehana had used her new-found language skills to get a job as a cleaner and a dinner supervisor at a school, the headteacher of which says she is doing “fantastically well”.

Her father recently fell ill in Pakistan, and she travelled there by herself, filling in leave of absence forms, reading signs at the airport and understanding in-flight announcements and ordering food. Ordinarily, she says, she “would have sat silently and gone hungry”.

She even carried on with her Zoom classes while she was in Pakistan.

The WEA said while it would have been “easy for them to walk away, they supported each other through to the end”.

They had been on a course the WEA was running with a children’s centre in South Tyneside which was run face-to-face until lockdown, after which the five also set up WhatsApp and Zoom groups to “support anyone who was struggling, whether with study or emotional problems”.

The WEA said that “not only have they learned new skills on the course, as well as making confident Zoom presentations, but they have also shown themselves to be very creative at teaching their children at home under pressure”.

Sally, who teaches life skills and crafts to students with learning difficulties and disabilities, won the award after she “immediately volunteered” to pilot a return to in-person teaching last autumn.

“Lockdown has caused a lot of stress, anxiety and lack of confidence,” she said, as many of her learners cannot use technology and live independently, so they “never saw anyone else from one day to the next”.

“For me, it’s personal. They were my mum’s group originally and I’ve taken over now she has retired.

“Between us, we’ve known them for a lot of years, which was why we fought so hard to get them back face-to-face, as soon as we possibly could.

“I pestered and pestered to get back to in-person learning. We had all our PPE ready, with all our policies and procedures up to date.”

Sally says she finds with her groups: “You see their confidence growing in front of you.”

Azra worked as a teacher for 25 years at a local college before joining the WEA, where she was assigned to teach ESOL to women, such as mums from a local primary school. Many of them had either recently arrived in the UK from Pakistan, or had been here many years but never taken part in society.

“Getting them into class in the first place was the hardest challenge,” she recalled, saying she had to win the trust of their husbands.

Azra says she started her classes with breathing exercises to relieve stresses caused by cross words that students had had with husbands or mothers-in-law.

Beforehand, many students lacked simple skills, such as booking an appointment or taking their children to the park.

But now they organise coffee mornings and fundraisers, have joined gyms, and gone on shopping trips.

Having invested in new technologies since Covid forced her sewing and textile courses in Scunthorpe online, Lucy has attracted new students from all across the country.

She found the first online sessions “frustrating,” as she struggled to show people what she was doing with her hands, and pre-recording sessions did not help.

Her breakthrough was a visualiser: “It’s like a webcam that angles over a certain area, such as my hands or the sewing machine. I could now line things up and show the students as I sewed.”

Lucy said the “final piece of the jigsaw” was a digital switcher, “which meant I could jump from, say, the pattern instructions to the visualiser with a click of the mouse. It just flows really well.”

Malcolm has been made a fellow “having formed strong bonds” with the WEA, after what the organisation has called a “long and important role in public life”.

This has included roles as chair of NHS England, chair of the Russell Group of universities, provost of University College London and pro-vice chancellor of the University of Cambridge.

He was made a CBE in 2003, an Officier De l’Ordre National du Mérite de France in 2004, and knighted by the Queen in 2013 for services to higher education.

WEA called him a “firm believer in the power and importance of adult education, not least having seen his mother thrive through her learning with the WEA.

“We are delighted that he has agreed to form an even tighter bond with us.”

The chief executive of the WEA from 2012 to 2019 has been made a fellow. She kept the organisation’s finances strong “despite reduced public funding, times of austerity, and as a consequence of public policy, reducing participation in adult education across the sector”.

Her successor, Simon Parkinson, called it “a challenging time, but her determination and drive inspired the organisation to adapt and succeed”.

In addition to her work at the WEA, she has also taken up roles with The Open University, The Education and Training Foundation and the Learning and Work Institute.

“Today, this fellowship recognises both the WEA’s continued appreciation of Ruth’s impact on the organisation and her continued passion about us,” Parkinson said.

“Ruth’s commitment to lifelong learning throughout her career has caught the eye of many, not least those in the highest seats of power,” after she received an OBE in 2007 for services to workplace learning.