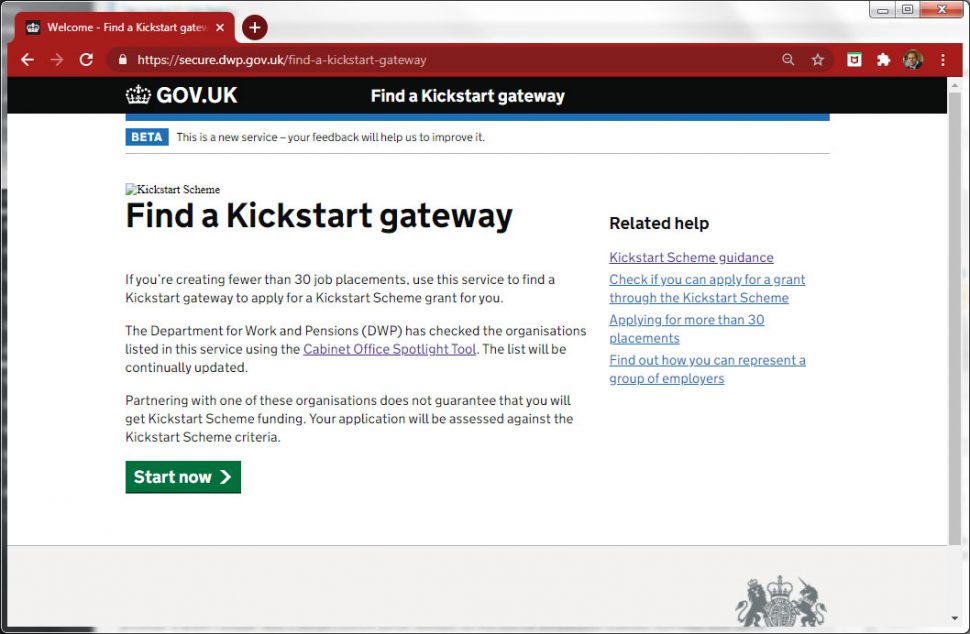 [UPDATE: Five days after publication of this article, the DWP got in touch to say that they use human checks as well as their algorithm in the gateway approval process.]

An FE Week investigation has found dozens of companies selected by the Department for Work and Pensions to become “Kickstart gateways” with little to no trading history or based outside of the UK.

The DWP has issued more than 600 approved firms a per job placement fee of £300, plus up to a further £1,500 for every 16 to 24-year-old on Universal Credit they put through the new £2 billion wage-subsidised employment programme.

FE Week’s  findings have raised serious concern over the “automated due diligence checks” used by the DWP as part of a contract selection process using a new “Cabinet Office Spotlight Tool”.

Small employers have to use ‘gateway’ companies (which include colleges, chambers of commerce and hundreds of private companies) where they have less than 30 vacancies according to DWP policy.

The DWP is understood to be so concerned about the quality of gateway providers that they have now stopped taking applications and scrapped the requirement for small employers to use them from 3 February.

FE Week has shared its findings with the relevant government departments.

Examples of gateway firms shared with the Treasury and DWP  include Kickstart Jobs Ltd, which according to companies house was incorporated just three months ago.

Another, KA001 Limited, lists a gmail contact email address on the gov.uk Kickstart website and their first set of accounts filed in November 2020 shows “total assets less liabilities” of £100.

FE Week also shared the example of Casual Speakers Ltd, a DWP authorised Kickstart gateway firm which Companies House lists as being based in Tel-Aviv, Israel and therefore has not filed accounts in the UK.

A DWP spokesperson replied to questions about how these firms were selected by saying: “Kickstart gateways are subject to stringent checks.”

Responding to our findings, shadow work and pensions secretary, Jonny Reynolds, said: “Billions of pounds of public money is being poured into Kickstart and we must ensure it is being spent well to create meaningful job opportunities for young people. Young people and businesses can’t afford any more incompetence from this government.”

A college manager that runs a Kickstart gateway in partnership with a local chamber of commerce, who did not want to be named, said: “It beggars belief that the DWP would agree that companies with little or no recent trading history or which were only set up in the weeks and months ahead of opening up the gateway application process were allowed into the process.

“We need urgent action to resolve this.”

According to the official Kickstart gateway website, the “DWP has checked the organisations listed in this service using the Cabinet Office Spotlight Tool”.

The same webpage links through to another government site which states: “The Spotlight is a new tool to improve the management of grant applications. It has been purpose built by the Cabinet Office.

The site continues: “Spotlight saves time, improves decision making, and reduces the risk of fraud. Spotlight is available across all government and public length bodies.”

FE Week also found many companies advertising themselves as being a Kickstart gateway with no history of job matching.

Firms advertising their Kickstart gateway services include Banana Scoops Ltd, an ice cream supplier to Ocado which claimed on Twitter to have 70 placements already approved with DWP.  Another encouraging applications from small employers is Rollerworld Limited, a company with an ice rink in Essex.

FE Week also showed DWP the website www.kickstartschemegateway.co.uk, which could be mistaken for being government owned.

A spokesperson for DWP said: “Employers should find their gateway through the approved gov.uk page.”

And despite there being no training requirement for Kickstart, when asked about some gateway providers keeping the £1,500 the DWP spokesperson said: “Where Kickstart gateways provide some or all of the training they retain an agreed portion of the £1,500 support and training funding.”

The DWP website states: “Every job placement created gets £1,500 funding. This will be paid to you and you will need to pay this to the employer.”