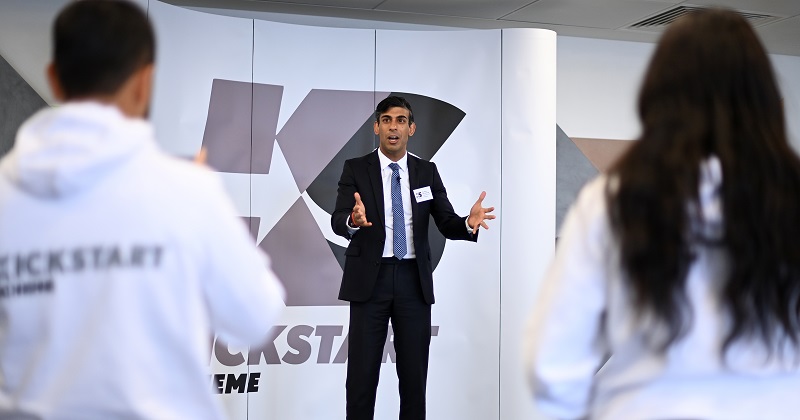 The chancellor is to scrap the minimum 30 vacancy requirement for the government’s Kickstart scheme, scuppering the plans of organisations that had become so-called “gateways” to help smaller employers access the programme.

FE Week understands that some organisations have been told by ministers that the vacancy limit will be scrapped, meaning any business will be able to directly access the Department for Work and Pensions scheme without the need of Kickstart gateways.

Hundreds of organisations successfully registered to become gateway providers and include colleges, local chambers of commerce and private training providers.

They will still be able to operate across the UK but there will be little incentive for employers to use them.

The Kickstart scheme, announced by chancellor of the exchequer Rishi Sunak in his summer statement in July, offers a six-month work placement to 16 to 24-year-olds on Universal Credit who are at risk of long-term unemployment– with the government picking up their wage bill.

Currently, employers have to be able to offer a minimum of 30 placements to be allowed to apply for the scheme. Those which cannot have to apply to join through a Kickstart gateway provider.

For each placement, gateway providers receive £300 to support administrative costs, while employers are supposed to receive £1,500 per placement for help with setup costs.

However, FE Week understands the Treasury is concerned about the revelation that some gateway providers have been taking the full £1,800.

This newspaper raised concerns about this approach with the DWP in October, but was told that although the £1,500 had to be spent on start-up and support for the young person, gateway providers and employers were free to come to “suitable arrangements” on how that support would be provided, including models where all the support was provided by the gateway.

One gateway provider to have adopted this approach is a partnership between the Federation of Small Businesses and Adecco Working Ventures, which was celebrated at the time of its launch in September by the work and pensions secretary Thérèse Coffey.

The FSB said last year that as part of the scheme, Adecco Working Ventures would “ensure quality of support throughout the process and advise on those valuable next steps of re-entering paid, full time employment”, with the £1,500 government grant going “to provide this comprehensive wrap-around support”. The FSB then received the £300 gateway payment.

Adecco Working Ventures was launched in July as a joint venture between the Adecco Group UK and vocational training provide Corndel. In November, it was revealed that private equity firm THI Investments would acquire Corndel for more than £40 million.

News reports at the time said it was expecting “an additional £30 million of sales” to come from its partnership with Adecco.

It is understood the move to scrap the minimum jobs requirement has prompted fury in the further education and skills sector, after training providers scrambled to become gateway providers to support the scheme last year.

Providers are also said to be angry about the way the announcement has been handled, coming just days after the government’s skills for jobs white paper pledged a greater role for employers’ groups such as chambers of commerce.

Announcing the vacancy rule change, Secretary of State for Work and Pensions Thérèse Coffey said: “Kickstart has moved up a gear and I encourage employers to join us and invest in the next generation of talent by joining our Kickstart scheme.

“By removing the threshold of a minimum 30 jobs for direct applications, we are making it even simpler to get involved.

“Now is the time to prepare for post-lockdown placements and employers will now have a choice to apply direct or through one of our 600 fantastic Kickstart gateways who may be locally connected or sector-specific providing that tailored support.”