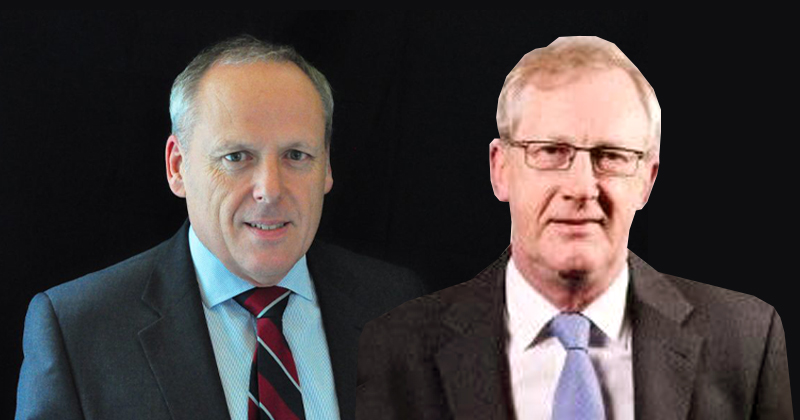 A college that has been led by a troubleshooting interim chair for almost a year has appointed a permanent replacement as it continues to consider options for a merger.

Ex-chief executive of the Association of Colleges Martin Doel (pictured left) was parachuted into Highbury College in December 2019 after it was hit by an expenses scandal and placed in formal FE Commissioner intervention.

Succeeding him from this month is businessman Paul Quigley (pictured right) who has been promoted to the position of chair after joining Highbury’s board as a member in January.

His CV includes finance and managing director positions at numerous waste management and chemical companies across Europe. His LinkedIn page says he has led a number of business “acquisitions and divestments” throughout his career.

Quigley previously spent 12 years on the board of neighbouring Eastleigh College including eight years as chair in a period which saw the college rated as ‘outstanding’ by Ofsted.

Penny Wycherley, Highbury’s interim principal who took over from former principal Stella Mbubaegbu also in December 2019, has agreed to stay on until August 2021.

The decisions come as the college continues a structure and prospects appraisal with FE Commissioner Richard Atkins. While there is currently no deadline for the appraisal’s conclusion, the college told FE Week that “all options” are being considered, including merger.

Wycherley thanked Doel, who was previously brought in to chair West Kent and Ashford College’s board as it was put through insolvency, for his “commitment and dedication to Highbury during what has been a truly extraordinary year”.

She also welcomed Quigley as the new chair, saying that he brings a “wealth of knowledge and invaluable financial experience to the role and his dedication to the further education sector is admirable”.

Quigley said: “After joining the board in January, I am both delighted and excited to become chair of an organisation so fundamental to the prosperity of Portsmouth, both educationally and economically.

“The current team of governors is stronger than ever with members from an impressive array of backgrounds. I very much look forward to working with all at Highbury and can see exciting times ahead.”

Highbury’s former chair Tim Mason and principal Mbubaegbu stepped down after FE Week revealed how £150,000 was spent on Mbubaegbu’s corporate college card in four years, including extravagant items such as numerous first-class flights, stays in five-star hotels, a boozy lobster dinner and a £434 pair of designer headphones.

Around the same time the college had to make redundancies, scrap its A-level provision and dropped from Ofsted ‘outstanding’ to ‘requires improvement’. Highbury has also been stuck in a legal battle with a Nigerian state following a failed technical education project.

Just a month after Doel and Wycherley took over a Highbury, the pair discovered the college was running out of cash and had to secure a £1.5 million emergency bailout to keep it running.

FE Commissioner Richard Atkins was sent in to the college at the command of then Department for Education minister Lord Agnew last October. Atkins’ report from his visit was finally published last month and found “serious issues regarding leadership, management and governance”.

A follow-up visit was conducted during the summer of 2020 where Atkins said a “significant step-change in openness and trust” had been made under the interim new leadership.