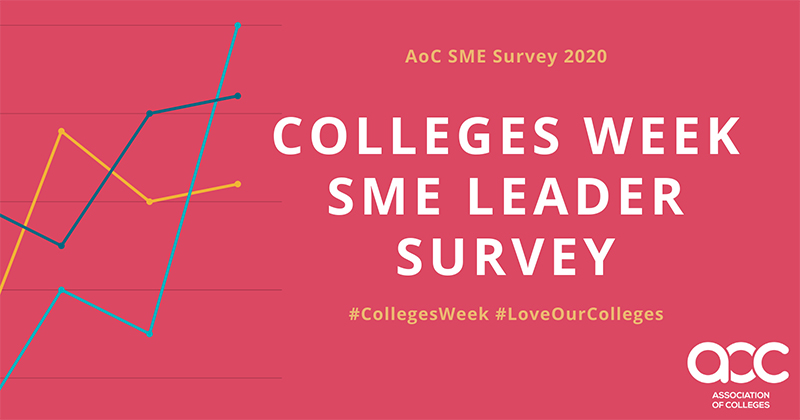 A college representative body has marked the start of an annual celebration of the sector with a survey highlighting the plight of small-to-medium enterprises trying to access skilled personnel and training for employees.

A survey of 503 such businesses by the Association of Colleges (AoC) comes ahead of Colleges Week on Monday, and as education secretary Gavin Williamson thanked college leaders and staff “for their dedicated efforts during these unprecedented times”.

Forty per cent of SMEs were found by the survey, conducted by Opinium, to believe it is more difficult to find employees with the right skills now than it was five years ago.

Meanwhile, 53 per cent do not think enough is being done to help their businesses skill and reskill their workforce as Britain nears the end of Brexit transition period in December.

Once that transition period ends, 45 per cent believe it will become even more difficult to hire people with the right skills.

But Brexit has been supplanted as businesses’ greatest worry by Covid-19, with 53 per cent citing the virus as most present on their minds.

“Skills gaps did not emerge in this pandemic,” says AoC chief executive David Hughes, “they are long-standing challenges that have been exacerbated by Covid-19 and the UK nearing the end of the transition period”.

Forty-four per cent say the skills gap in their sector is likely to increase because of threats like the virus, and 54 per cent believe they will need to train workers to adapt to it.

This need has been reinforced by the British Chambers of Commerce head of people policy Jane Gratton, who said employers will need to invest in upskilling and reskilling their workforce “to remain competitive in a global business environment”.

She added that the business communities want to see a “more agile” skills system, which is “more responsive” to their training needs.

Colleges are “key to boosting skills levels,” she said and the SMEs agree: more of them would turn to colleges to train their staff than would turn to universities or online learning.

Hughes commended the government for committing to prioritising skills, following announcements of £1.5 billion in college capital funding and the £2.5 billion National Skills Fund, but said: “We need the investment to flow quickly to the right people and places. People and businesses need skills and training as an urgent priority if they are going to survive the coming months and thrive in the coming years.”

Williamson acknowledged it had been a “difficult and uncertain time for businesses, particularly SMEs”.

“We need to make sure we can unlock talent in every corner of the country, which is why the prime minister announced the Lifetime Skills Guarantee.”

Colleges Week, a national celebration of the college sector, is this year running between October 19 and 23.

Each day of the week will revolve around a theme, including rebuilding the economy and responding to Covid-19.

To mark it, Williamson has said the sector has “gone above and beyond to make sure their students are supported, can continue learning and return to onsite delivery”.

Colleges, he added, would be at the “centre” of the effort to “teach the skills that learners and communities need, while also matching businesses with the talent they need for the future”.

As well as local events colleges will be running, there will be a debate in the House of Commons on “the role of colleges in a skills-led recovery”, hosted by Peter Aldous MP, vice chair of the all-party parliamentary group for further education and lifelong learning.

The chair of the education select committee Robert Halfon has also put forward a motion for the House to “recognise the unique role that colleges play in supporting people, employers and communities”.