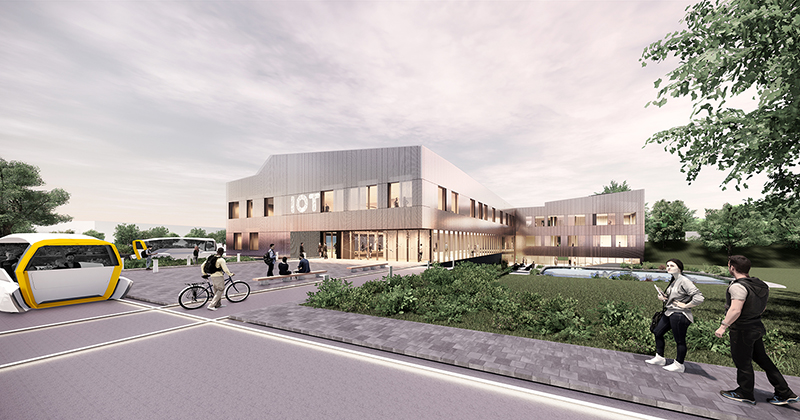 Covid is being blamed for recruitment concerns at the government’s new flagship Institutes of Technology (IoT), FE Week can reveal.

Despite demand for more traditional FE courses booming, the Department for Education is understood to be in negotiations with several IoTs over revising down contractual student number targets.

A crunch meeting was held in June with all of the first 12 IoTs and the DfE, in which “strong sentiment” was shared “across the group” that learner number targets were at risk due to the pandemic, according to newly published board minutes for Dudley College.

The college, which is spearheading the opening of the Black Country and Marches Institute of Technology set for autumn 2021, told FE Week that a follow-up meeting was held in September where the DfE confirmed that recruitment “re-profiling” would be “dealt with in the round by collecting data from all IoT’s in the coming months”.

At least four other colleges leading on the development of an IoT have said they are also struggling to meet recruitment numbers in the current climate.

Extensions to the contractual deadline for spending capital funding, originally set for March 31, 2021, have also been granted to a number of IoT projects owing to delays to their multi-million-pound builds.

While failure to meet learner number targets and other key performance indicators (KPIs) can put individual IoTs at risk of having their licence revoked, the DfE has said it will “work closely” with the institutes and introduce “mitigation measures” where necessary to ensure a successful rollout.

IoTs are not the only new, high-profile technical education schemes that appear to be struggling to attract students: an FE Week investigation last month found that colleges and schools had missed two-thirds of their T Level enrolment targets.

Meanwhile, a different investigation by FE Week in September found that recruitment for more traditional level 3 further education courses was flourishing, and even university technical colleges learner numbers were on the rise despite the pandemic.

Institutes of Technology are a major government project aimed at boosting high technical level skills across England. They are a collaboration between colleges, universities and employers, and specialise in delivering higher level technical training at level 4 and 5 in STEM subjects, including digital, advanced manufacturing and engineering.

The first wave of 12 IoTs was announced in April 2019 and are being created through a £170 million capital funding pot. A further eight are expected to open in the coming years through a new competition worth £120 million in total, which launched on Thursday.

Harrow College and Uxbridge College (HCUC) enjoyed a successful launch of the West London Institute of Technology in autumn 2019, recruiting 306 learners against a target of 272, according to board minutes for July 2020.

But the board noted “the challenge of meeting learner number targets for 2020/21” which led to a request to the DfE to “keep targets at 2019/20 levels taking account of Covid and a slow start to the national rollout”.

The board also said the implications of the Covid-19 pandemic “might adversely impact on DfE funding for the IoT”.

An HCUC spokesperson told FE Week: “Our first year as an IoT has gone well. However, Covid has been a concern with regard to our higher-level recruitment but this is not specific to our IoT and is a concern for many across the FE sector.”

They added that the capital build for the IoT, developed with partners including Brunel University London, Fujitsu and Heathrow Airport, was completed on time and on a budget set at almost £9 million.

Elsewhere, the Swindon and Wiltshire Institute of Technology is working towards a launch of autumn 2021 but raised concerns about recruitment.

A spokesperson said: “Targets remain unchanged. We will work towards achieving them but we know that apprenticeship recruitment in HE and FE recruitment has been impacted nationally currently and this is likely to result in a variance in numbers.

“However, with greater levels of unemployment and promised government initiatives to upskill adult learners particularly in these sector areas, it is difficult to forecast whether these targets for next year are currently achievable. It will be a challenge.”

Dudley College said it was expecting its target of recruiting 313 learners in the first year of operation for the Black Country and Marches Institute of Technology to be revised by the DfE.

A spokesperson told FE Week: “At the last IoT network meeting [in September], the DfE confirmed that re-profiling will be dealt with in the round by collecting data from all IoTs in the coming months.

“The DfE acknowledges the likely impact of Covid on recruitment, particularly on apprenticeship pathways as at the moment there is a predicted downturn of 20 per cent but as things begin to stabilise we are hopeful the negative impact will be mitigated.”

Dudley has also been struggling to meet its capital build project deadline, after work stopped for seven weeks to enable it to be made “Covid-safe” earlier this year. The college is also still waiting to purchase the land of the site, although this is purely administrative and has not impacted the building schedule itself, which is continuing “under licence pending completion”.

The college said the purchase of the land is “anticipated in the next two weeks” and the DfE has agreed to extend the deadline for spending its £17.36 million allocation from March 2021 to the end of July 2021, given the circumstances.

Barking and Dagenham College was unable to comment at the time of going to press but minutes from a board meeting in June 2020 warned there “could be a real challenge with the KPIs” for its IoT in the current climate.

Other IoTs that spoke to FE Week claimed that Covid had not had a big impact on their rollout.

Milton Keynes College is leading on the South Central IoT, which is inspired by England’s famous wartime codebreaking centre, Bletchley Park, and plans on recruiting 213 learners in its first year of operation in 2021/22.

While there has been a delay to its building work, which resulted in the DfE extending the deadline by which it needs to spend its £27 million of capital funding, a spokesperson said the consortium behind the project is “confident” of meeting its student targets.

Lee Probert, principal of York College, told FE Week the Yorkshire and Humber Institute of Technology launched last year and that the impact of the Covid-19 pandemic “is currently under discussion with the DfE”.

“Final actuals against KPIs for year one were very positive,” he added. “We continue to recruit students and deliver against contracted targets in 2020/2021.”

Paul Phillips, principal of Weston College Group, officially opened the aWest of England Institute of Technology building just this week but began delivering its curriculum in the last academic year.

In year one, the IoT was set a target of 200 learners which was achieved. The target has increased to 320 learners in 2020/21, which “we are on target to achieve”, Phillips added.

Elsewhere, the Greater Birmingham and Solihull Institute of Technology opened to students in the autumn of 2019 and “met its learner number recruitment KPIs in its first year”, a spokesperson told FE Week, and raised no issue about meeting this year’s targets.

New College Durham principal Andrew Broadbent confirmed that North East Institute of Technology is on track to launch in autumn 2021 but did not say whether or not it was expecting a drop in learner number targets.

A spokesperson for the University of Lincoln, which leads the Lincolnshire IoT collaboration, said that whilst there “have been challenges due to Covid”, the Lincolnshire IoT “achieved and exceeded its recruitment target in its first year and has managed to sustain its construction programme”.

“We are looking forward to another positive year despite the challenging circumstances created by the pandemic,” they added.