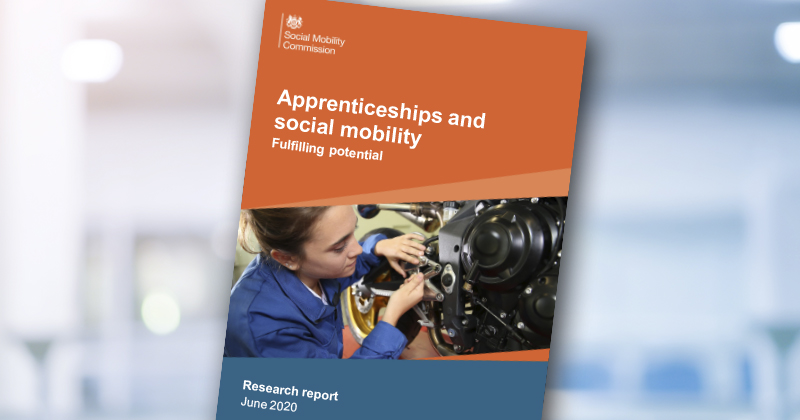 The apprenticeships system is “failing” young disadvantaged people and needs “decisive” government action to stop it from becoming worse, according to the Social Mobility Commission.

A report published today by the independent advisory non-departmental public body warns that disadvantage gaps exist at “every stage” of the apprenticeship journey, from initial selection of candidates by employers to the quality of training apprentices get.

Their analysis found there was a 36 per cent decline in starts by learners from disadvantaged backgrounds between 2015/16 and 2017/18 – the year the levy was introduced – in comparison to a 23 per cent decline for more privileged apprentices.

At the same time only 13 per cent of degree-level apprenticeships – the “fastest growing and most expensive apprenticeship option” – were taken by disadvantaged apprentices.

The authors of ‘Apprenticeships and social mobility: Fulfilling potential’  also warned that the coronavirus pandemic may further worsen the disparity.

Steven Cooper, joint deputy chair of the Social Mobility Commission, said the apprenticeship levy, introduced in April 2017, has “disproportionately funded higher-level apprenticeships for learners from more advantaged communities, rather than those from disadvantaged socio-economic backgrounds who would benefit more”.

He added that it is “no longer credible for the government to assume that apprenticeships automatically improve social mobility and leave the system to its own devices”.

The Department for Education said they are “absolutely committed to levelling up opportunity across the country” and will do “all we can to make sure no-one is left behind as a result of coronavirus”.

Despite the apprenticeship currently “not delivering”, the commission states that apprenticeships are one of the most “effective means” of boosting social mobility for workers from poorer backgrounds.

They found, for example, there is a 16 per cent boost to wages for disadvantaged learners who complete their training, compared with 10 per cent for others.

But it is getting into and through the system that is the problem.

The research, conducted by London Economics, mirrored the traditional steps in the apprentice journey: from selection into apprenticeship training until entry into the labour market.

They found a “big gap” between apprentices, depending on their socio-economic status, in terms of employer selection for training; the quality or “value” of the training received; the likelihood of completing training and of progressing into higher-level apprenticeships, or further and higher education; as well as levels of pay after undertaking an apprenticeship.

The authors described this as a “remarkable” finding and proves that the levy has been “ineffective” in narrowing the disadvantaged gap.

They also “clustered in low-paying subject areas at higher apprenticeship levels, particularly for women” such as the services, health, education or public administration sectors, and had “shorter planned apprenticeship durations than their peers, on average, within higher-earning subject areas such as engineering, construction and Information and Communications Technology”.

The commission found that disadvantaged apprentices are less likely to complete their training than non-disadvantaged peers.

A total of 63 per cent of apprenticeships started between 2013/14 and 2014/15 were successfully completed within three years at intermediate level by disadvantaged men and women, compared to 67 per cent for their more privileged peers.

The main reason for dropping out included low levels of pay with small and medium-sized enterprises more likely to pay apprentices the minimum wage.

She added that disadvantaged apprentices are at greater risk from an economic decline following Covid-19, as many are employed in sectors such as hospitality and retail.

Cooper said strategic action and direction are needed to target the apprenticeships system better on disadvantaged communities and improve the system’s value for money.

“This is an easy win for the government in its attempts at levelling up – if it can get this right. The government must look at the structural barriers in place and take action to channel resources where they will have the greatest effect,” he added.

The DfE’s spokesperson said: “We are looking at how we can make sure more people and businesses can take advantage of apprenticeships in the future including  supporting employers, especially small and medium sized businesses, to take on new apprentices this year.”

The commission’s six targets for government to meet by September 2023:

1: Increase the share of apprentices from disadvantaged socio-economic backgrounds to pre-levy level.

2: Increase the proportion of starters from disadvantaged backgrounds at advanced and higher levels to comparable levels currently prevailing for non-disadvantaged apprentices.

3: Eliminate the disadvantage gap in levy support for starters at higher level.

5: Reduce incidence of non-achievement for all socio-economic backgrounds to levels comparable to those in other education sectors.