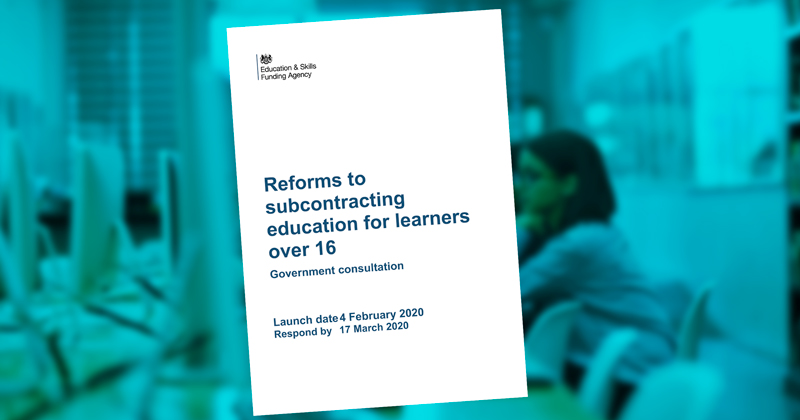 The government’s response to a consultation that outlined plans to overhaul subcontracting rules in further education has been delayed by a month.

Officials in the Education and Skills Funding Agency had planned to publish their decisions in May, but they announced today that their outcome will now be released in June.

In their weekly update, the agency explained this was because responses to the consultation were allowed up to the end of March – two weeks after the official closing date of 17 March – in “recognition of the fact that at that time providers were urgently addressing issues relating to the Covid-19 outbreak”.

The subcontracting consultation was launched earlier this year after the ESFA’s boss, Eileen Milner, sent a sector-wide letter warning she will take strong action against any provider that does not play by their rules, following a number of high-profile scandals.

When the call for views got underway in February, the ESFA said it was aiming to “eliminate subcontracting that is undertaken for purely financial reasons”.

It also proposed that where the aggregate value of a subcontractor’s delivery exceeds more than £3 million of ESFA funded provision, the agency would make a referral to Ofsted for the subcontractor to be subject to a direct inspection.

Another key recommendation was to introduce “stronger criteria for subcontracted provision delivered at a distance”, stating that as a “broad rule of thumb”, partners should be no more than one hour away from the prime contractor by car.

Further plans include stricter controls on the circumstances in which the whole of a learner’s programme can be subcontracted, as well as tighter oversight of sport related provision as it is a “particular concern” to the ESFA.

A new “rationale for subcontracting” requirement as part of provider subcontracting declarations is also in the works. Providers could need to “state the educational intent for entering into subcontracting arrangements and that governors and boards have agreed this”.

The consultation stated that “entering into subcontracting arrangements for financial gain” will not be considered as an acceptable reason for doing so.

The ESFA’s plan was to start implementing subcontracting rule changes at the start of 2020/21 but none surfaced in the draft adult education budget rules published at the beginning of this month.