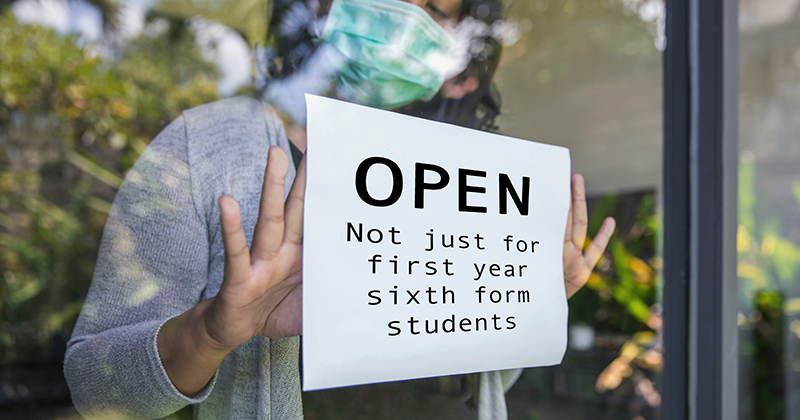 College leaders have been given significant flexibility over which learners they invite back onsite from as soon as June.

The Department for Education made the announcement in updated guidance tonight after college leaders had strongly demanded them.

It is understood senior staff from the Education and Skills Funding Agency had phoned nearly every college principal on Wednesday 13 May to quickly collate feedback on the expectation they reopen from as soon as 1 June and only for those 16 to 19-year-old learners on the first year of a two year course, equivalent to year 12 in schools.

Mirroring the findings of an FE Week survey the following day in which 54 per cent of college leaders that responded said they were supportive of the announcement, a massive 94 percent (32 out of 35) said the DfE should leave it to college leaders to decide who should come into college when they reopen.

The new DfE guidance, published on May 14, says: “We understand that there may need to be some flexibility in place due to the variety of learners and courses offered in FE setting.”

Adults in the same class as 16 to 19-year-old learners could also receive face to face tuition, as can 16 to 19-year-olds due to finish this academic year “but not been able to because their assessments have been deferred”.

Apprentices aged 16 to 19 should also be included on the same basis “for their off the job training where possible and appropriate, so that they can be offered some face to face contact”.

The DfE added that the policy also applies to “a small number of local authority providers, specialist post-16 institutions and independent training providers”.

Many colleges are already open to vulnerable students and children of key workers, but the guidance makes it clear they do not have to open more widely from the June 1.

Monday June 1 is the earliest opportunity, but many colleges are expected to plan to open at a later date, after many leaders told the ESFA they would need more time to prepare.

David Hughes, chief executive of the Association of Colleges, said the guidance “will help colleges to make the right decisions in the best interests of their students, whilst maximising the safety of staff”.

“We are advising every college to make their own decisions on their assessment of priorities, needs, the context in which they operate and individual risk assessments and we are confident that is what the government wants,” he added.

The latest guidance will be welcomed by Shelagh Legrave, chief executive of Chichester College Group, as she responded to the FE Week survey to say she wanted to be given “flexibility as to who is on site” along with “more guidance on health and safety”.

In terms of the college staff there were “some very enthusiastic to return tomorrow, others more reticent”, according to Legrave, who added: “We will not force staff to come in if they feel unsafe.”

Russell Lawrance, principal of Haringey Sixth Form College, said he encouraged the government to “set the challenge so to speak – but don’t interfere in the detail” and committed to all students “having a virtual meeting or a phone conversation or meeting in college with staff as a minimum sign off”.

And Bill Jones, principal of Leeds City College, also called on the government to “trust college leaders” whilst “responding swiftly to our questions and concerns”.

The government has also given college leaders the “flexibility to decide the appropriate mix of online and face to face content for each programme, reflecting what will maximise learner engagement as well as supporting more vulnerable learners, and enabling the provider as a whole to minimise transmission risk”.

And nearly all college leaders expressed concern when asked about the logistics and cost of staff and student transport.

More guidance on the safe use of transport is expected from the DfE as they “will be consulting with sector representatives”…“and this will be published along with further guidance for secondary schools and colleges and other providers in the week commencing 18 May”.