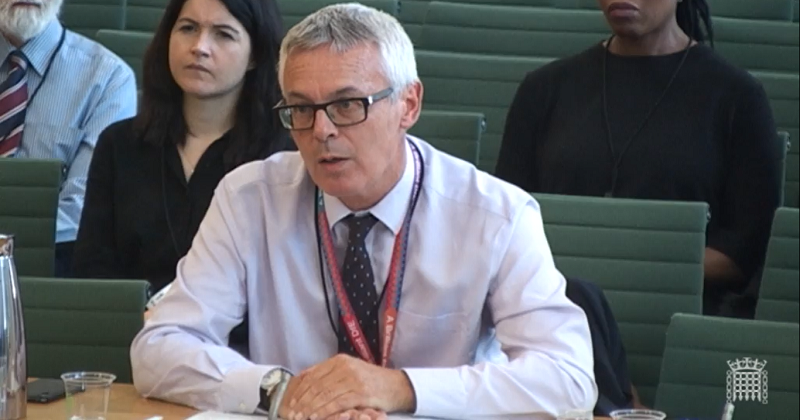 The Department for Education’s top civil servant has been quizzed before an influential Commons committee on £680 million university technical college building costs, equivalent to £50,000 per pupil.

Jonathan Slater, the department’s permanent secretary, was taken to task at a hearing of the Public Accounts Committee held after the National Audit Office released a report into the UTC programme last October, which found ten of the 58 UTCs which opened between 2014/15 and 2018/19 had closed.

MP Richard Holden, who up until his election in December was a colleague of Slater’s as he was a special advisor to education secretary Gavin Williamson, highlighted that the DfE spent £742 million opening new UTCs, which at the time of the report had around 13,500 places occupied.

Slater countered: “Well it would be if we hadn’t made alternative use of the capital of UTCs that have since closed,” adding that one of the DfE’s tasks whenever a UTC closes is to make sure the capital is spent.

“We want to make sure that all of that capital – land, buildings, equipment – is reused.”

And as eight of the UTCs were being reused, Slater argued that while the capital is not being spent on the UTC pupils, it is being spent on other children.

But although that had been the case with eight of the UTCs to have closed, they were still in negotiations over two which closed last summer – UTC@Harbourside and South Wiltshire UTC.

Slater also revealed the DfE had relied on a controversial group of cost-cutters to manage UTC spending as there had been questions about whether they could be using their resources “more efficiently”.

“School resource management advisers” had been into most of the UTCs, 33 in total, and identified £10 million-worth of savings – £4.3 million of which has been achieved.

The advisers were the brainchildren of former DfE minister Lord Agnew and are contentious due to recommendations seen by FE Week’s sister newspaper Schools Week, which showed the advisers telling schools to save money by limiting lunch portions and by using spare staff to cover lessons, instead of supply teachers.

The committee also quizzed Slater on the £28 million in transitional funding which had been pumped into UTCs since 2016. Committee chair Meg Hillier MP asked him if he was happy with the funding to keep the schools afloat.

He answered yes, as although it is impossible to imagine a world where government would decide against “innovating with a new set of schools designed to take children halfway through their secondary career for non-academic curriculum.

“You could decide not to do that, then my task is easier, but I did not take this job because it was easy.”

Transitional funding, the NAO report said, was used to keep UTCs running following a DfE review in 2015. It is normally paid in annual instalments of £200,000, and is often given to the colleges who join multi-academy trusts.

The NAO’s report also found that the 48 open colleges were operating at 45 per cent of capacity by the end of January 2019.

Slater said if you do find a significant number of schools which are not full then “my job is to make sure I am not throwing good money after bad”.

Instead, he said he is putting funding into a system which he thinks “can be sustained”.

“Ten have closed. We have only agreed to open one UTC since 2015 and it hasn’t opened yet. Three have applied for funding but that doesn’t mean they are going to get it.”