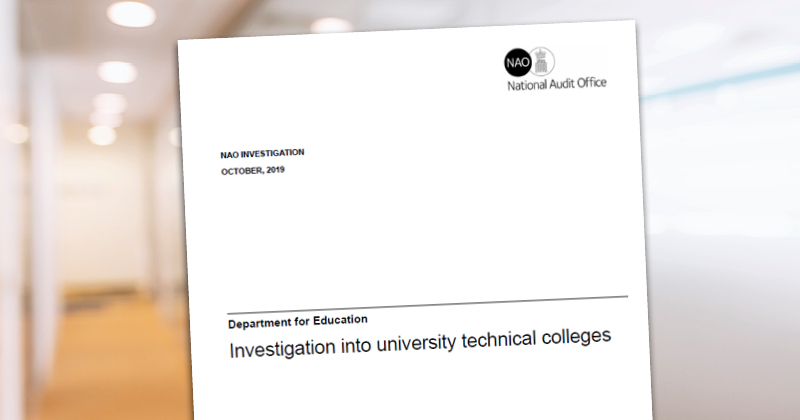 The government’s audit watchdog found that total deficits for the embattled 14 to 19 technical providers now constitute nearly a tenth of the total for every academy trust, after rising from £3.5 million in 2014/15 to £7.7 million in 2017/18.

The Department for Education has spent what was described by one union as an “eye-watering bill for the taxpayer” of £792 million on the UTC programme between 2010/11, when they were first set up, and 2018/19.

Despite the huge cash injection, the scheme has been hit with a catalogue of issues which FE Week has exposed over the years and which the NAO’s report lists, including unviable student numbers, multiple closures and poor Ofsted results.

Chair of the Public Accounts Committee Meg Hillier said the report “provides further evidence as to why the Department for Education is my top department of concern”.

Most of the £792 million was capital grants, but there was also £28 million to improve UTCs financial positions and £8.8 million to cover their deficits.

In too many cases, University Technical Colleges have proved to be expensive failures

The DfE has also spent £4.5 million on helping UTCs “improve” and £9 million on closing UTCs, which included the costs of writing off debts and staff redundancies.

University and College Union general secretary Jo Grady said too often UTCs have proved to be “expensive failures” that took funds away from the further education sector at a time when it most needed support.

Assistant general secretary of the National Education Union Nansi Ellis found it “shocking” that such a “staggering amount of money” has been spent on the “flawed model” of UTCs.

The NAO has also found the 48 open UTCs were operating at 45 per cent of capacity at the end of January 2019, which it says has implications for their financial viability.

It reported that the Education and Skills Funding Agency has “significant concerns” about the finances of a quarter of the remaining UTCs (13 out of 48).

UTCs have attempted to remedy their recruitment and financial problems by applying to take on pupils from year 7, rather than from the age of 14 as they were originally intended to.

This month it was announced two UTCs have been granted permission to open to 11-year-olds from next September, after another UTC and before others are expected to follow suit.

They’ve also been actively encouraged by government to join multi-academy trusts to strengthen their position.

However, the NAO has found UTCs are struggling to meet both counts: as of August 2019, as a proportion of schools inspected, Ofsted had rated 52 per cent of UTCs as good or outstanding, compared with 84 per cent of free schools.

And as of July 2019, 26 per cent of UTCs were on the ESFA’s list, compared with one per cent of academy trusts.

Responding to the NAO report, Lord Baker said it “records the price of everything and the value of nothing”.

“UTCs should be judged by the success of their students becoming apprentices, studying STEM subjects at a university and getting a job as a technician or an engineer. For that we have the best destination data of any schools in the country.”

The NAO did find a higher proportion of students from UTCs go into sustained apprenticeships after GCSEs and A-levels or their equivalents, compared with the national average.

He added that the DfE has encouraged the Baker Dearing Trust to make applications for new UTCs and they are working with local employers and universities for the next round in November.

A Department for Education spokesperson said: “We have been clear that the department is committed to ensuring people have access to high-quality technical education across the country.

“UTCs are helping to deliver on that, with 21 per cent of pupils progressing into apprenticeships after completing their post 16 education, more than double the national average.

“As this report recognises, we have taken significant action to support and raise the profile of UTCs to make sure they continue to play a role in our diverse education system and provide the skills that employers need.”