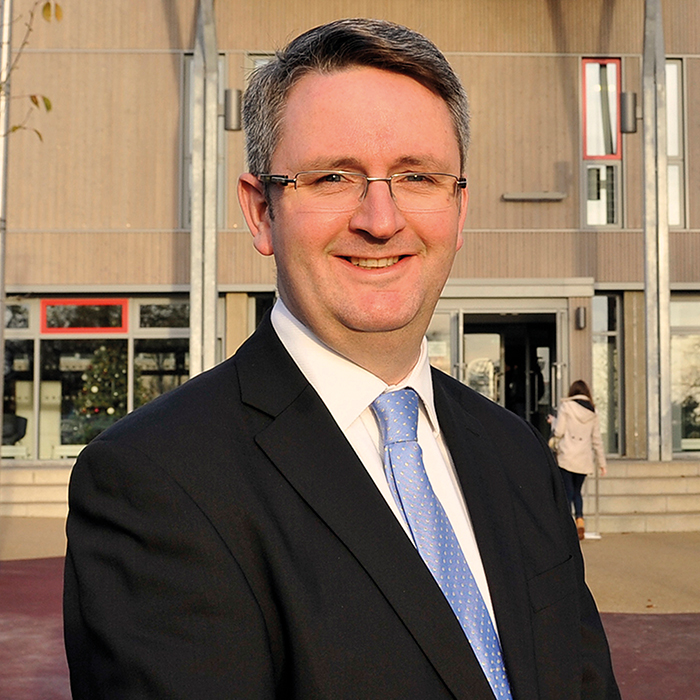 “This organisation is under my skin, and this has become more than just a job”

If anywhere feels like a left-behind coastal region, Medway is it. Yet, after decades of moving around Europe, England and South Africa, this is where Ipswich-born Simon Cook, principal of MidKent College, has decided to drop anchor. “This organisation is under my skin, and this has become more than just a job. This is about changing the area we work in.”

We are standing at the window of his office on MidKent’s Gillingham campus. 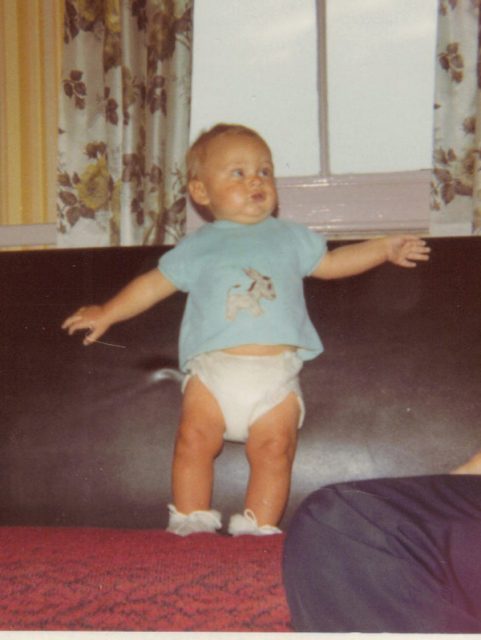 Simon as a baby: he has always felt fortunate to have been brought up by a family who instilled a sense of pride and strong work ethic

From this vantage point, he describes to me everything in sight, and even some things that aren’t.

On the horizon is the Medway River.

“We’re working to get better access to it,” he tells me. “Some of the young people we teach haven’t ever raised their eyes to notice it’s there.”

He points out the largest gas storage station in England, the new developments on the water’s edge, St Mary’s Island, which used to be a base for nuclear submarines and where residents are “not allowed to plant certain things in their gardens” as a result of what was buried there.

Slowly, he steers my gaze ever closer to the building we are in. Lower Lines Park, on the other side of the college car park, is so called after the Napoleonic War defences that were built there. The upper lines – a giant trench Cook describes as the college’s very own moat – are to our left. Under the car park are tunnels built by the Royal Navy, which are regularly broken into by “urban explorers”.

Across the road are what used to be officers’ houses. I hadn’t noticed, but on closer inspection they are quite different from the rows of terraced houses behind them where the workers who used to man the vast operation of the Chatham Royal Navy dockyard lived. In 1984 the dockyard was closed down, bringing a 414-year history to an end, and devastating the local economy.

Our attention is on Gillingham, but there’s no doubt Cook is just as invested in the history, geography and community around MidKent’s other campus in Maidstone. “I’m not interested in what’s going on in other parts of the country. I’m interested in what’s going on in Medway and Maidstone, and the impact we can have on those communities, which, for me, goes back to what colleges always existed for. Whether you want to use the words ‘anchor’, or ‘civic institutions’, that’s our place.”

When we turn our eyes away from the estuary view, Cook walks me along a patchwork panoramic display of the college’s history. He could speak volumes about each frame if I let him.

And I’m tempted, but today is the college’s careers fair and it’s already clear he’s a hands-on leader who will later rue having missed the fun and networking of talking to his students and all the visiting local employers.

The event has been running for only three years, but it looks like a professionally run, well-established tradition. It’s not really designed to secure employment directly but to create community and partnership. As we talk, it becomes clear to me that this is this principal’s superpower. Every employer, every colleague in every place he’s lived: he remembers them by
name, has a story to tell about them and knows where they are today. 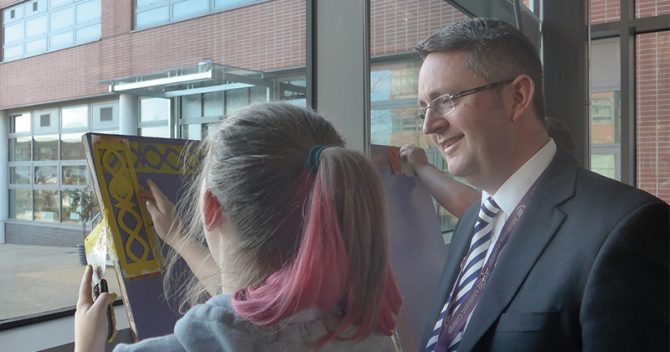 You will find it difficult to not bump into Simon walking around the college, speaking to staff and students. Being connected is so important

What Cook seems most proud of is how bringing local businesses in contact with young people has helped to break down stereotypes. Back in his office, looking at the patchwork mural, he points out the gendered courses on offer in the 1950s.

“That’s still reflected today. We don’t do things like secretarial but let’s replace that with hair and beauty, for example… What hasn’t changed is that if you’re a young person who’s not doing well at school somebody somewhere is going to say to you, ‘Well, that just means you’re good with your hands’.”

Famously, Kent is still a selective authority, and Cook talks with genuine concern about the young people who arrive at college having been let down twice – effectively failed at the age of 11, and then often again at the age of 16 – young people who have been biding their time at school because they “think they’re destined for a career in construction… Yet we go down to Maidstone and it’s totally different. There’s a much more white-collar community. A trade is the last thing you think is  relevant. Let’s raise the profile of technical education.”

Cook has some skin in this game.

He was one of those children for whom the academic curriculum seemed to lack purpose. He left school at 14 and got on to an apprenticeship in an Ipswich hotel kitchen. Living with his grandparents for 18 months and inspired by his carpenter grandfather to work hard and take pride in his finished work, he gave it all he had.

The result was that the first half of Cook’s working life was spent in kitchens in what was a stellar career. By 19, he moved to Park Lane’s Intercontinental, then its sister hotel in Frankfurt at the age of 21, then on to other Michelin-starred restaurants in Germany. 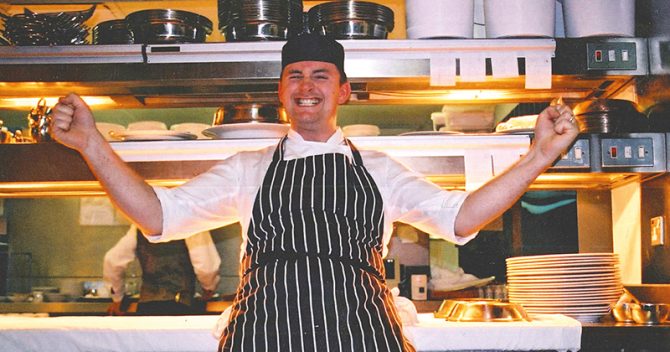 I interrupt him to ask about Gavin Williamson’s policy drive for technical education in England to rival Germany’s within the decade. His answer is succinct: “Good luck with that.”

I press him for more insight. “I think about my craft and the esteem in which being a chef was held in that country, and around technical qualifications.
“If you did a job, and then you went for your ‘meister’ qualification, you were really held in high esteem whether you were a builder or a bricklayer or chef.”

In fact, it was only last year that Germany rolled back some of its deregulation around the Meisterpflicht (master craftsman) qualification. For a long time, it was illegal to start a business or hold an elevated position in a company without it. The regulations are back on the Bundestag statute book  after trades lobby groups successfully argued that the 2004 marketisation had created business instability and resulted in too few apprentices being trained.

But Cook didn’t stay long enough to involve himself in any of that.

Adventure beckoned and he headed to South Africa. In another Michelinstarred kitchen near Cape Town he met his wife-to-be. But there was a problem.

A short stint for her in the hotel business had made her certain of one thing: “There is no way I’m marrying a chef,” she told him.

Together, they moved back to England. Feedback from an apprentice in South Africa gave him a clue about what he might do next. The seed sown, it wasn’t long before he crafted himself an opportunity to try out teaching, and he has never looked back.

Cook has repeated in FE what he did in haute cuisine. He gained his CertEd at Bournemouth & Poole College, then moved to Somerset. There, a change of leadership and his wife’s difficulty integrating caused him to consider quitting, but he restored his professional confidence by becoming an Ofsted inspector, and then went on to become deputy principal at Cornwall College.

Unfortunately, it wasn’t long before his boss and mentor there, David Linnell, was hospitalised and announced he would be stepping down.

Not prepared to go through another leadership change so soon, Cook moved on, and that is how he found himself at MidKent.

But it wasn’t long before disaster struck here too. Principal Sue McLeod, MidKent’s first female principal, was diagnosed with a brain tumour and passed away very suddenly.

In post for only a year as deputy, Cook was encouraged, despite himself, to apply for the top job. He has now been principal for five years.

It hasn’t been an easy journey.

However, two grade 3 inspections from Ofsted in 2015 and 2017 didn’t shake him from his path. “It just added more and more pressure, knowing that what was wanted was rapid improvement. It was a real tension, because I knew rapid improvement would mean we’d crash again. What we needed was to make things worse before they got better. We needed to get sustained improvement.”

The approach worked, and in 2018, MidKent was given a clean bill of health by the inspectorate, with a grade 2 report.

Is the Michelin star of college grades the next target, I ask? “Holding on to Michelin stars is harder than getting them,” he replies, “because everybody else wants to be better than you. That’s what we spend so much time doing.

“We are here for our students first and foremost, and if that means becoming an outstanding college as recognised by Ofsted, that’s a great byproduct.”

This seasoned college principal has bigger fish to fry than to chase after an ephemeral accolade. Medway is bidding for city of culture status and supporting the effort to turn the region’s fortunes around is firmly on his horizon.