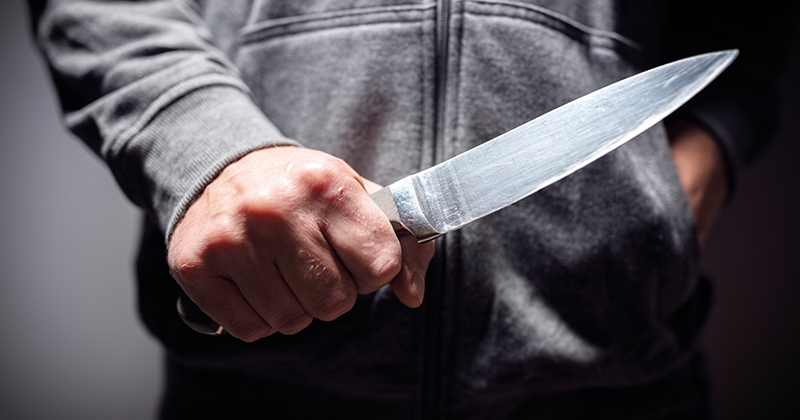 Knife crime in colleges has more than doubled in recent years, new figures suggest, which has prompted leaders to introduce metal detectors and enforce bag searches.

The data obtained by FE Week from 22 of the 39 police forces in England reveal that almost 400 offences with the bladed objects have been recorded in colleges since 2015.

Knife crime more generally has been steadily on the rise since records began in 2011, according to the Office for National Statistics. However, the ONS cautions that “data can be affected by changes in recording practices, policing activity and victims’ willingness to report crime”.

While each police force has different methods of recording the data, the offences included possession, assault, threats or use of violence, grievous bodily harm, wounding, harassment, rape, robbery, criminal damage and affray.

However, full national figures for college offences are likely to be much higher than this because the London Metropolitan Police, which records the highest knife crime rates across the whole country annually, refused to release data in response to FE Week’s Freedom of Information request.

The findings come a month after two students were stabbed near a college in Cheshire and another teenager was attacked by the entrance to a college in Northampton.

College bosses across the country have reacted to the growing problem by investing thousands of pounds in new equipment, but some have warned they are often restricted by a lack of funding.

Newcastle and Stafford Colleges Group (NSCG) searched and screened a total of 514 students across their two sites in September 2019 and January 2020, using handheld metal detector wands and random selection generators.

The group spent almost £3,300 on the equipment and training, of which £1,000 was awarded by Newcastle Borough Council.

Lesley Morrey, director of student engagement and partnerships at NSCG, said there were no “areas of concern” and the only object found was a fruit knife. “We want [students] to understand that carrying weapons doesn’t make them safe, it puts them more at risk,” she told FE Week.

Students “felt that we were taking their safety very, very seriously” and parents had praised the measures at open evenings. As a result, she believes the policy has “paid dividends” and had “the desired impact”.

Jayne Holt, assistant principal for learning services at Walsall College, said her college has “always worked proactively” with West Midlands Police to carry out knife arch operations as well as undertaking other safeguarding measures within the institution and alongside other agencies.

London South East Colleges established a “Twilight College” in 2019, as a result of several high-profile reports of knife crime in the capital. It delivers extra-curricular activities four days a week from 4pm to 6pm, when students may be more vulnerable to becoming a victim of knife crime on their way home.

This month, survey results from the college found 82 per cent of students agreed that they felt safer travelling home after attending, and four-fifths would like to be able to stay even later.

Principal Sam Parrett said expanding the initiative with “limited resources is challenging and we have had to (and will continue to) divert resources to it”.

“We would like this to be recognised with additional funding to support our capacity to develop this important area of work,” she added.

An Ofsted research report into knife crime in London from March 2019 found the “biggest barrier” that colleges face when tackling the issue was the cost.

Further data released in September 2019 by the education watchdog found that seven colleges in the capital use knife detection wands and six use knife arches. It also showed that five use stop-and-search, and seven use “anonymous reporting procedures”.

The inspectorate reported the common denominator of students who were found carrying bladed objects was their “vulnerability”, with almost all having experienced poverty, abuse, neglect or living within troubled families.

Iryna Pona, policy manager at the Children’s Society, which works with young people at risk of, or affected by, criminal exploitation, said the data obtained by FE Week was “a real worry”.

“Colleges could do more to spot the early warning signs that a student may be at risk,” she continued.

According to Pona, “too often” there is a rush to exclude students. She claimed colleges should work to understand and address the underlying reasons for concerning behaviour, and that colleges should raise incidents of a young person carrying a knife with their local children’s social care team as a safeguarding concern.

“We know that funding cuts mean capacity can be an issue and the government must ensure all colleges have the resources they need,” Pona added.

A 2019 report by the all-party parliamentary group on knife crime also found colleges were said to not always engage well with students who were starting to get involved with street gangs or low-level criminal activity, with permanent or temporary exclusions only providing them with “more time to spend on the street getting into trouble”.

David Hughes, chief executive of the Association of Colleges, said: “Knife crime is a complex and worrying issue which AoC is working on with a range of national agencies and policy makers.

“We know that colleges take safeguarding and the security of their staff and students extremely seriously, based on a strong culture of non-violence. Sadly, there have been some serious incidents in colleges which always have a wide-reaching, long-lasting impact but those cases are relatively rare.”

Hughes added that no single institution can tackle knife crime alone and that he has been impressed with the partnerships which colleges have been developing with local partners, including local violence-reduction units, community safety partnerships and resilience forums.

In January, a new “Lives Not Knives” report by social justice charity Nacro revealed young people aged 15-to-19 believe they are not protected by the police, and that harsher penalties would not deter those who carry knives out of fear.

It called for an “urgently needed” shift on prevention, for interventions to be focused on tackling the underlying causes of violence as well as the provision of funding to support students who have been excluded.

A government spokesperson declined to comment on the figures obtained by FE Week but said engagement in education is a strong protective factor against involvement in violence and that it is important for colleges to equip children with the skills they need to be safe.