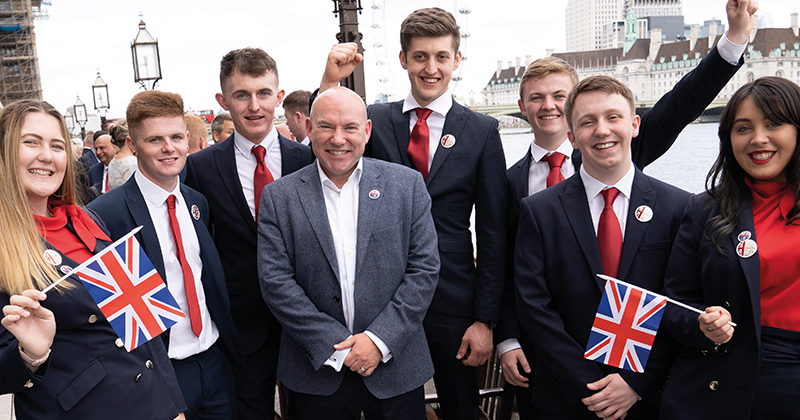 The organisation behind the UK’s performance in international skills competitions is launching the WorldSkills UK Centre of Excellence project to train around 1,000 FE lecturers.

Five training managers – fresh off mentoring WorldSkills UK competitors for various skill challenges in EuroSkills Graz this year and WorldSkills Shanghai next year – will be employed full time to work for the centre.

They will be recruited by the beginning of May and it is expected that they will be drafted into colleges and training providers from September.

WorldSkills UK said provider applications to take part in the project should come from those suited to each managers’ skill area: for instance, if it is announced a training manager from a construction background has been hired, a provider focused on construction will be expected to apply.

The manager will work with lecturers in different subjects at the provider to “train the trainer”, while “digital masterclasses”, featuring recorded sessions with training managers from other countries delivering “top-level training”, will be offered.

WorldSkills UK chief executive Neil Bentley-Gockmann (pictured centre) said his organisation was “uniquely placed to undertake such a project” as they know “just how high the global industry standards are set and we know what it takes in training techniques to achieve them”.

Providers can apply for one of twenty places in the first year if they meet certain criteria, which includes over 1,000 16 to 18-year-olds on their roll.

NCFE chief executive David Gallagher said this first year will establish the centre’s way of working: “What is the Centre of Excellence in detail? How does it work with the sector? How do we make sure it does not become another tickbox for continuing professional development (CPD)?”

A further twenty providers will be selected for years two and three of the project, ten for each year, and Gallagher says these stages will focus on “improving educational outcomes”, such as Ofsted scores and increasing the number of people competing internationally.

WorldSkills UK aims for the project to ultimately benefit 120 FE providers and nearly 1,000 lecturers through sharing of the digital masterclasses over the three years.

Gallagher hopes the centre will encourage institutions which are not heavily involved in WorldSkills to decide if they want to be more actively involved in the movement.

WorldSkills UK deputy chief executive Ben Blackledge made clear the centre “is not about us saying we can come and fix” professional development for lecturers.

“We’re saying there is excellence in the FE sector and is there something small we can do to help facilitate best practice and invest a bit in these tutors and trainers?”

Another aim of the centre is “influencing setters of training standards” and Blackledge says his organisation has had initial conversations with the Department for Education and Institute for Apprenticeships and Technical Education about how this can be a “more formal and systemic approach to influencing standards”.

They are having ongoing conversations with the government’s teams on FE workforce and T-levels to help with those programmes of work as well.