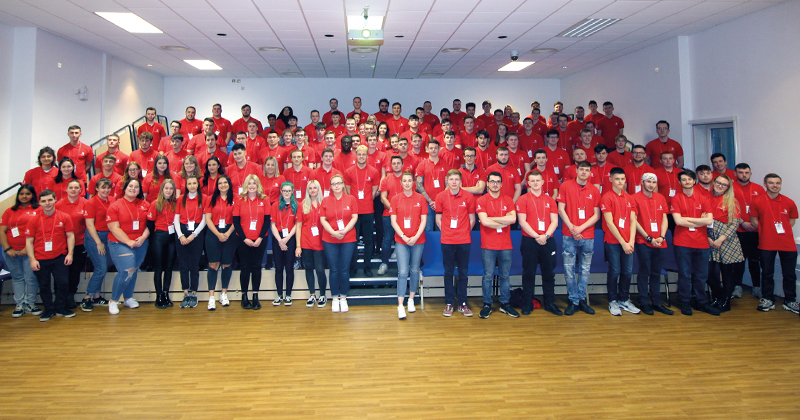 As the run-up to WorldSkills 2021 picks up pace, FE Week reporter Fraser Whieldon went behind-the-scenes at a Squad UK bootcamp to find out how we train our competitors for the international stage

Nearly 120 skilled young people came from across England, Wales, Scotland and Northern Ireland to Loughborough last weekend for their first bootcamp to prepare them for competing in either WorldSkills Shanghai in China next year or EuroSkills Gratz in Austria 2020.

Currently, they are known as Squad UK, a large group of potential competitors who will be whittled down to Team UK, the select few going to China and Austria.

After which, the squad members split up into groups to take part in teambuilding activities, such as sorting themselves into an alphabetical line without speaking.

I took part with one of the groups when they had to pass each member through a hoop, which my team achieved by standing in a line and having a couple of them run up the line, passing the hoop over one person’s head, then up from the feet of the next person.

It was a fun icebreaker and a great way for the squad to gel as a possible team, but there was a serious purpose to it.

Training managers were using the bootcamp to measure each squad member’s so-called “soft skills”: their attitude, commitment, motivation and how they react to criticism.

Linzi Weare, the training manager for hairdressing, was looking to get her four-person squad of competitors down to three this week, so: “It’s possibly going to be a really quick journey for one person.” 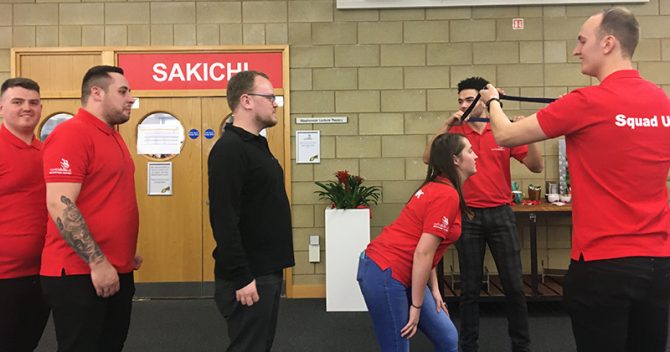 The squad also took sessions on how to use social media, as from now on “they are ambassadors for Squad UK and for the vocational system,” says Blackledge.

He is responsible for the “always evolving” training programmes WorldSkills UK runs, and says this year they have looked at a more “data-driven” approach and analysed what factors helped competitors perform better before, such as the support they get during the process.

They are also looking at how they put in performance milestones and how they do pressure testing in a “more systemic way”, Blackledge explained.

I saw an example of this emphasis on data in a talk by WorldSkills performance coach Karl Bartlett, where he asked squad members to sign up for an app that allows him to monitor what they eat and tell them what they are missing out on.

Blackledge describes the new focus as “brilliant for Squad UK and eventually Team UK, but also it is vital for the mainstreaming of what we do”.

“How does this get taken back into the classroom and back into colleges and training providers to have that understanding that this is what makes the marginal difference or the big difference in performance?”

Towards the end of the day, squad members took turns signing a Union Jack and waited for their turn in a queue that stretched around the conference centre in which the bootcamp took place. 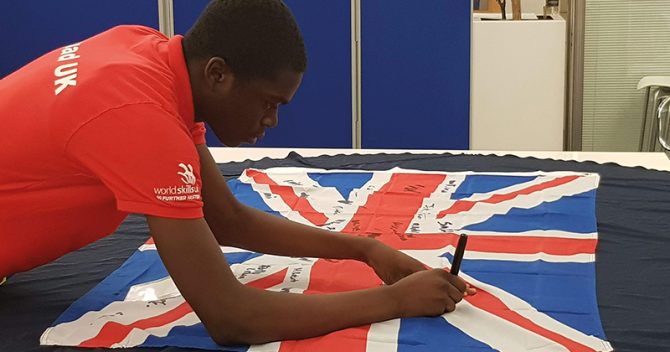 But the bootcamp is also about getting the training managers up to snuff: on the Friday, they met to share strategic and technical information and good practice.

Christian Notley from Chichester College, chief expert for cabinet making, told me he had been making sure managers “share their knowledge” as WorldSkills has “a huge wealth of skills and information which are applicable to other training managers”.

“It’s good to talk to new experts and I can learn to come up with new ideas and it’s a great way to really drive ourselves forwards and upwards,” he added.

Naomi Radbourne was one new training manager I met on the day; she has taken over hair and beauty from Jenna Wrathall Bailey MBE, who helped lead the UK to a string of gold medals at competitions including Sao Paulo in 2015, Abu Dhabi in 2017 and Kazan in 2019. 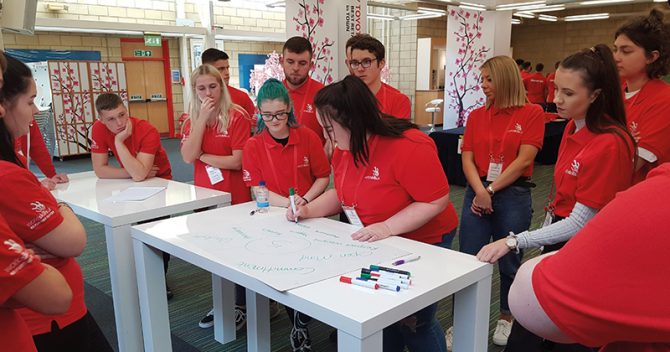 Squad members jot down what they think makes a successful competitor

Bearing that in mind, I asked Radbourne how she was going to keep up that level of quality: “It’s very much a strict training programme. It’s about having that openness with the competitors as well, making sure they’re getting exactly what they need, and we are pushing them as much as possible to be the best they can be through training and personal development.”

Formerly a competitor, Radbourne feels she is better acclimatised to a support role. When she was competing, her nickname was Mary Poppins because “I always pulled something out of the bag for other competitors and never for myself”, such as hairbrushes and facial mitts.

With that level of commitment, a fresh training regimen, and the wealth of experience behind them, things are looking bright for WorldSkills UK.

What makes you want to compete in WorldSkills?

FE Week spoke with a number of Squad UK members throughout the bootcamp to find out how and why they got involved in the elite tournament.

For a lot of squad members, this would have been their first bootcamp. But not so for Lavanya, who says she has received a “golden ticket” to try again at competing in WorldSkills, after narrowly missing out on a place to go to Kazan. 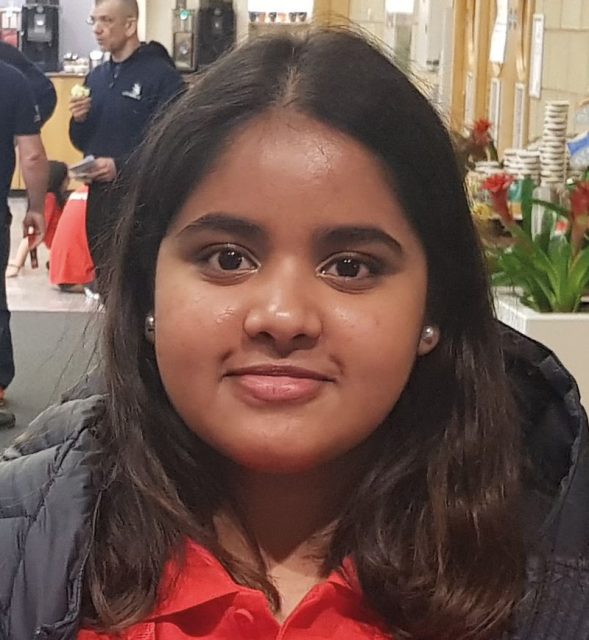 Although another competitor ended up representing the UK in the chemical laboratory technician competition at last year’s tournament, Lavanya was still within the age range, so WorldSkills UK let her rejoin Squad UK to take another shot.

The Middlesex University student is determined to compete in Shanghai, but wants to improve on her interactive skills: “I don’t really go along and talk to people. I’m not an extrovert, I’m an introvert. So I will probably try to work on communication and being part of the team.”

But the improvement she sees is not just while she’s competing: Lavanya has also noticed an improvement when she is working on her undergraduate project in the laboratory.

“This actually gives me the confidence to work on my own in the lab, as it’s the same technique in a different place.”

But her experience with WorldSkills also helps her work in tandem, for instance, with her supervisor: “I’m learning through this journey,” she believes.

She first found out about WorldSkills from her tutors and initially just went along to see what it was like, “but once I was into the competition and the spirit and the confidence it brings” she got very engaged. Having attended a bootcamp last year, she said she personally feels she “deserves it more” this time around.

Madeline is another competitor looking to represent the UK internationally, but things could have been very different for her.

“I did A-levels and was planning to go to university to do photography. My grandfather heard something in the news that said the jewellery trade is finding it hard to recruit people.” 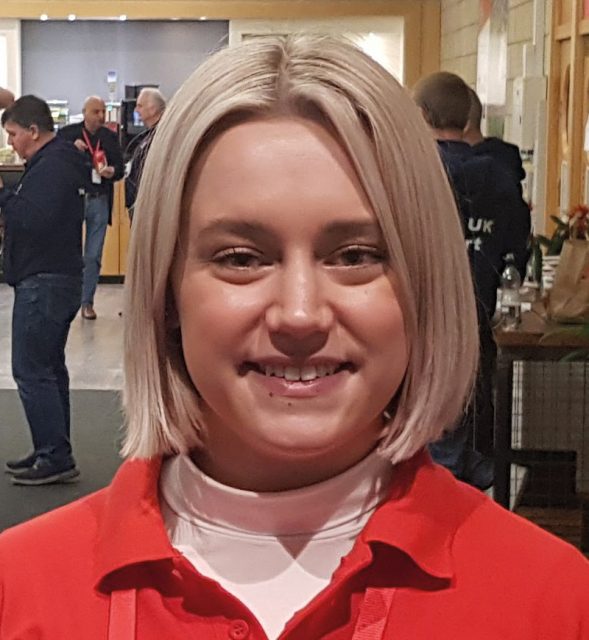 Having always enjoyed design and technology at school, Madeline found a course with the Goldsmith’s Centre in London, deferred her place at university and now works for David Marshall at The London Art Works.

The support from her employer to compete has been “great”, she says, as they’re “totally up for anything I need to do and are happy to contribute towards anything.

“But of course, WorldSkills themselves have been great contributors, helping me get to and from these things.”

At the bootcamp, she was looking to get to know her squad mates: “I’ve always been difficult with the icebreaking, so I feel like, in terms to this morning, I’ve already gotten to know a couple of new faces, so that’s definitely helped a lot.”

She found the team-building activities of the morning useful because, if she is picked for Shanghai, “it’ll be nice to know a few more faces”.

Spending time with the other squad members was something Madeline used to help with the stress of competing in front of an audience at WorldSkills LIVE: “I’m not used to people staring at me all the time.”

But, with the other competitors, “we’re all in the same boat” and they went out together after LIVE, which she found to be a “nice place to make connections and get to know people and especially people from across the country who are doing the exact same thing as you”.

Competitors take part in WorldSkills for many reasons. For Cameron, it was another chance to improve his skills in the area he obviously loves.

Cyber security, Cameron says, is under “constant threat… It’s evolving every day, with companies and enterprises across the world being attacked by cyber criminals. So my goal is to use the knowledge and skills I gain from WorldSkills and I’m excited to apply that to future careers.” 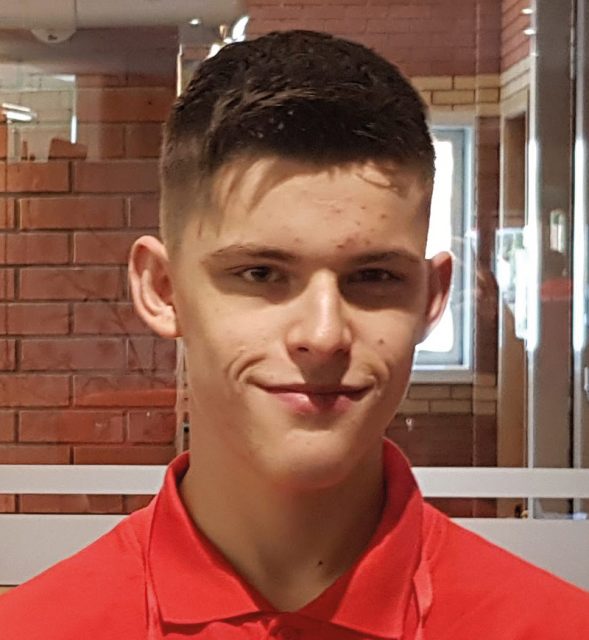 He came third in the cyber security competition at the WorldSkills LIVE, and was looking forward to getting stuck in with training. He hopes to gain new skills and knowledge at the bootcamp, as well as meeting new people and collaborating with his squad mates.

Cameron feels they “definitely” need the support of their training providers to get through the process. His own support comes from Belfast Metropolitan College, where he is studying cyber security technician infrastructure.

Many of the competitors talk about the support of colleges in terms of giving them time to compete. Cameron also highlights how his lecturers’ knowledge backs up his training.

Competing while at Belfast has been “especially useful” as he has “lecturers who specialise or come from a line of industry”.

In fact, the majority of his tutors specialise in a wide range of areas which Cameron says are applicable to cyber security.