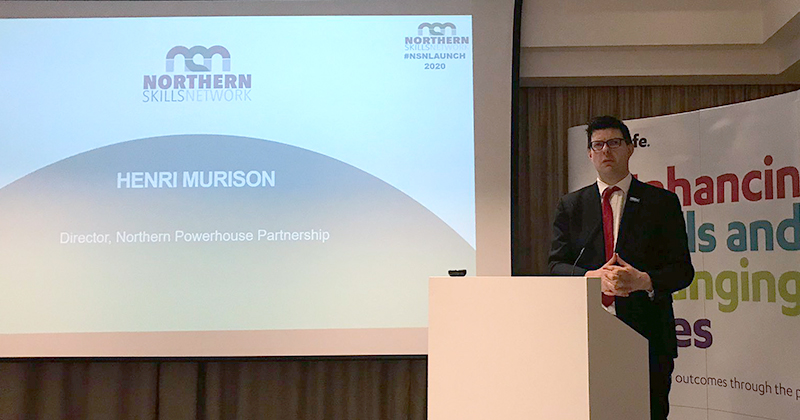 The director of George Osborne’s Northern Powerhouse Partnership has called for skills policy to be fully devolved from Whitehall, claiming the government has “failed” to deliver the system the north needs.

Henri Murison, speaking at the launch of the Northern Skills Network in Leeds today, pinned the failure on the Department for Education’s officials and said whoever the education secretary is after this week’s cabinet reshuffle “needs to listen to us, not their officials”.

In the meantime, he said, the department has “run out of time” so “universal control of our skills system” must be given to the north.

“That’s why we’re going to have mayors in every region of the north, in the Humber, in West Yorkshire, in Chester, Warrington, then Lancaster – and we’re not going to stop.”

The Northern Powerhouse Partnership is chaired by former chancellor of the exchequer George Osborne and represents businesses and politicians from across the north.

The adult education budget has already been devolved to certain mayoral combined authorities in the north, including Greater Manchester and Tees Valley. The government is also working with Sheffield City Region and North of Tyne combined authorities with the aim of devolving the AEB to those two in September.

Murison (pictured) said his call for greater devolution has been provoked because the department took “years” to deliver money which had been promised to the north, and they are “not welcome in the north of England with that promise anymore”.

The vote to “take back control” in the Brexit referendum and the collapse of the so-called “Red Wall”, where Labour MPs across the north were replaced by Conservatives in the December election, added fuel to this fire, he explained.

“Where is the ambition,” he asked the audience, “to mirror those like BAE and what they invest in skills in Barrow,” which puts 1,000 apprentices through their factory every year, according to Murison.

Having previously worked for the West Yorkshire Police and Crime Commissioner and Newcastle City Council, he also targeted ire at the government’s announcement this week of HS2, a high-speed rail line connecting London with the north and midlands.

Without greater skills devolution, “all the train lines in the world will make no difference on their own,” he said.

His call for greater control over skills policy in the north comes as the Northern Skills Network, which is aiming to provide a “single voice for skills” for over 300 providers, announced it had entered into a strategic partnership with awarding organisation NCFE.

This partnership will involve NCFE representatives sitting on the network’s board and means they will become “the ‘go to’ organisation for insights and advice on the skills and education issues affecting the north,” according to the awarding body’s executive director for customer and commercial strategy Sian Wilson.

The partnership, according to network chair Mike Smith, will help them promote the value of technical and vocational skills to employers and stakeholders, as well as support leaders of all ages to achieve the qualifications they need to advance their chosen careers and increase their social mobility”.