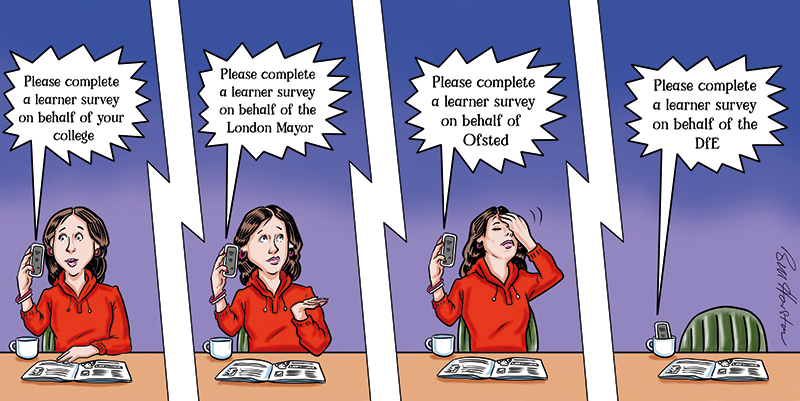 This would likely be in addition to the three separate surveys already undertaken annually by colleges, contractors on behalf of the Department for Education and by Ofsted during inspection.

The plan for a London Learner Survey is part of mayor Sadiq Khan’s approach to measuring the impact of provision, after his authority took control of the capital’s annual £306 million AEB in August.

The GLA commissioned a feasibility study for a “large-scale London Learner Survey” in December, which is expected to report back in the summer. Full rollout is planned for autumn 2021.

Mary Vine-Morris, the area director for London at the Association of Colleges, said the regional survey would be “largely welcomed” and would be the best way to capture social, learning and employment outcomes for the AEB.

She added that the AoC will continue to work with the GLA to ensure the survey is accessible to all learners (including those with SEND) and that it complements – or even better, replaces – some of the “costly survey activity which colleges currently undertake”.

Agenda minutes for a meeting on November 26, 2019 state that there are “issues” with current sources of data on economic outcomes from learning in London.

Provider data collected through the Individualised Learner Record (ILR) is “partial, with GLA analysis demonstrating that no destination data was collected for 43 per cent of learners completing adult skills provision in 2017-18”.

And Longitudinal Educational Outcomes (LEO) data, published through the Further Education Outcome Based Success Measures data release, is “more accurate and complete, but there is currently a time lag of at least two years between course completion and the data being published. There is no current collection of social impact measures on a London-wide basis”.

The agenda minutes claimed that the new London Learner Survey would allow for the collection of data on social impact and in-work progression that is “not possible through the existing ILR infrastructure and will also provide the GLA with more timely information on employment destinations”.

They added that a survey would also give the authority greater control over data on the outcomes achieved by learners, as there are currently “significant restrictions” on the use and publication of the ILR data, which is owned by the Department for Education.

It would also help the authority in its plans to move towards an impact-based funding model for the AEB, according to minutes from a meeting of the GLA’s outcomes for Londoners advisory group in September.

Full details of how the survey would look, including its cost, sample size and timescales for implementation, will be brought to the GLA in the summer once the feasibility study is completed.

The GLA is planning to run a pilot survey with a sample of providers in spring 2021, before rolling out the survey to all AEB learners from autumn 2021.

The authority said successful implementation of a survey will require support from AEB providers, so it will introduce new requirements for providers to support data collection of any future learner survey through its funding rules and grant-funding agreements.

Officials at the authority recognised a “risk” that concerns will be raised in the sector about the “perceived burden on initially collecting data on employment destinations two different ways – through the ILR and through the London Learner Survey”.

The GLA said it will mitigate this by exploring through the feasibility study how data collected through the survey could be shared with providers to return through the ILR.Minutes from the authority’s AEB board meeting in November state that the prospect of a London Learner Survey attracted “largely positive” views from stakeholders.

They added that the mayor “welcomed the fact that London was the first devolved area to look at coordinating a regional survey and emphasised the need to ensure that early access to learner data translated into an agile response to employer and learner needs”.